Over the last two decades, the growth and regulation of mixed martial arts has largely eliminated a number of undesirable elements from the sport’s early days: legal groin strikes, fish-hooking, fighters wearing shoes in the cage. The “David versus Goliath” bout has also fallen by the wayside -- but, unlike those other unsavory throwbacks, sometimes a fight fan longs for a good, old-fashioned freak show. 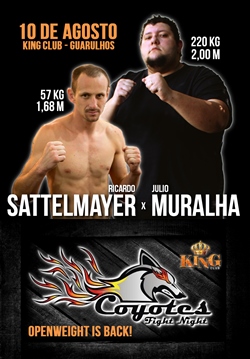 If you’re among those missing the Zuluzinhos of the MMA world, upstart Brazilian organization Coyotes Fight Night has a matchup for you. Promoter Ton Munhoz gave Sherdog.com the scoop on his Aug. 10 main event:

Emmanuel Yarborough, Akebono, Butterbean... MMA has contemplated us with a lot of "freak" Super Heavyweights facing lighter fighters in the older days of the sport, but a event in Brazil wants to bring it back. It was announced by Coyotes Fight Night that the 485lbs giant Julio Cezar Gregorio de Araujo is facing 135lbs journeyman Ricardo Sattelmayer in their first edition, to be held on August 10th.

The Openweight fight is the Main Event of the Coyotes Fight Night 1, who is going to have 9 pro fights that includes pro wrestler Beto Piovesan facing ninjutsu artist Renato Vuorinen in an old-school like clash of styles bout.

Bringing the experience of over 20 Muay Thai fights alongside 9 MMA fights, Ricardo Sattelmayer is looking for the battle of his lifetime. After starting his career on a disappointing 0-4 record, the 5'7" slugger has won three of the last five and looks forward on building a positive record in a true cinderella story. Julio Cezar is not the only tough fight he is preparing for: on July 27th, he is going to face unbeaten bantamweight Thomas Almeida, who has never fought a second round after stopping all of his 10 opponents so far.

On the other side of the octagon, the 30-year old, 6'6" high and 485lbs heavy Julio Cezar Gregorio De Araujo finally gets his chance to debut in MMA. A Judo black belt, Jiu Jitsu purple belt and former Rugby player, there is no secret that the key for the win of Julio is a quick takedown.

Will the weight difference of 360lbs matter in the return of the classic David vs. Goliath fights?