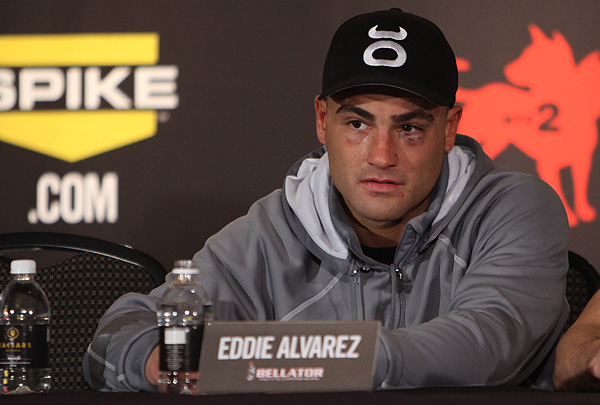 For months now MMA fans and pundits alike have wondered how the Eddie Alvarez contract situation with Bellator was going to play out. Last week we all got a better idea of just how acrimonious things have gotten between the Spike TV-based fight promotion and their former lightweight champion.

“Over the past couple of weeks Eddie has made of number of allegations that are completely untrue, they’re false, lies,” Bellator CEO and founder Bjorn Rebney told Sherdog.com.

“Ed has gone on the offensive, making statements that are completely untrue,” said Rebney. “I just felt that, at this point, I had to say these attacks are untrue, particularly the attacks on Viacom. I don’t even know why he is going after Viacom and Spike especially after what they have done for our sport. But, whatever his reasoning or whoever is inside his head telling him to make those statements, it’s time to stop.”

Speaking with MMAFighting.com’s Ariel Helwani last week, Alvarez alluded to a few of the bigger issues that have led to the contract stalemate that will, at this point, likely only be settled by a federal magistrate.

The main crux of his argument is the assertion that Bellator swapped some of the language in their early release letter from their earlier promotional agreement. The letter was issued by Bellator to allow Alvarez an earlier opportunity to see just what Zuffa LLC (UFC) would offer him after he completed his Bellator contract.

"They changed the wording ‘all terms matched’ to ‘material terms’ because they know they cannot match all the terms of the UFC offer,” said Alvarez. “They sent it to my house when they were supposed to go through my attorneys and my management. But they sent a different copy thinking that I would sign it and send it back."

Bellator CEO and founder Bjorn Rebney emphatically refuted the claim that there was a change in language.

The early release letter was a document drawn up as a favor for Alvarez after negotiations between both Bellator and Alvarez’s attorneys according to Rebney and states the following:

Bellator is hereby agreeing to conditionally waive its rights to the period of exclusive negotiation with you as set forth in Paragraph 18(A) of the Promotional Agreement, provided that this waiver is only with respect to negotiations you may engage in with Zuffa LLC. Your exclusive negotiation period obligations and Bellator’s rights with respect to any and all other third party combat sports promotions that may wish to engage in negotiations with you as set forth in Paragraphs 18(B)-(C) of the Promotional Agreement shall be stayed.

This is the final copy of the early release agreement Alvarez signed. It allowed him to seek out a contract with only the UFC and allowed Bellator to match it within 14 days.

Alvarez has stated that Bellator meddled with language in the early release letter and sent it directly to him rather than his management or attorneys. Neither of those are trivial accusations but despite that, the matching clause in his original contract was always going to be the measuring stick by which any future litigation was going to be determined.

Rebney also blasted Alvarez’s teammate Cosmo Alexandre for tweeting about how poor he is, lamenting his contract in the Newport Beach-based fight promotion. Despite the fact that he fought for Bellator six times in 18 months -- a pretty standard schedule for a professional mixed martial artist -- and has since been offered a chance to compete in two different Bellator season tournaments, Alexandre seems to blame Bellator for his financial situation.

The promoter could not fathom how a fighter who has declined multiple chances to fight in the company’s $100,000 tournament could drop any monetary complaints on his doorstep. It has been a company practice in the past to offer much less restrictive contracts to undercard fighters as opposed to tournament participants.

Perhaps this could be the sticking point for Alexandre, but until he comes forward to answer Rebney’s assertion that he is the one turning down fights we may not get a clearer picture.

The final point of contention coming from Alvarez’s comments over the past couple weeks was the fact that Bellator wronged Zack Makovsky, another former Bellator champion and Alvarez long-time training partner.

Again, Rebney stated that Alvarez was not just misrepresenting the situation but flat out lying. He asserts that Makovsky was paid every penny the company owed him under his promotional agreement. He did acknowledge that once he lost the bantamweight crown, Makovsky’s deal called for his pay to be lowered.

Makovsky’s former manager, Monte Cox, told Sherdog.com that in order to get his pay raised after winning the title, they agreed to a clause that allowed his pay to go down should he have lost the belt. When he was dethroned by Eduardo Dantas his future purses were set on a lower scale.

Alvarez did not return a request for comment via text message but his manager Glenn Robinson of Authentic Sports Management did speak to Sherdog.com briefly but had little to say about this increasingly discordant situation.

Robinson was asked specifically about the change in wording to the early release letter as well as Bellator’s claim that they have repeatedly offered Alexandre, who is also a Robinson client, multiple tournament fights.

He declined to speak on any specifics but did say he would “comment when the time was right.”

Robinson did express remorse that this situation has gone as far as it has.

“It is sad it has reached this level of frustration,” said Robinson by text message. “It was my hope to find some way to settle where everyone felt justification.”

It seems to be way past that point at the moment.

“If Ed’s willing to come forward and admit that he has made false statements and admit that he’s lied about the company then I will be happy to sit back down with him and talk about potential settlements,” said the Bellator boss.

Short of a full on mea culpa by Alvarez this dispute is likely headed toward even more litigation.

“I think that is something I would let our attorneys figure out,” said Rebney when asked if more lawsuits could be filed. “I think that Ed’s going to have to stop making false statements about … this company, that will stop. My hope is that these three different situations, each of which is false, if he stops those statements then I’m sure it will take a different turn than if he continues.

“If he stands by accusing the company that I worked so hard to build of being untrue to him or trying to deceive him then we’ll have to figure out what our alternatives are.