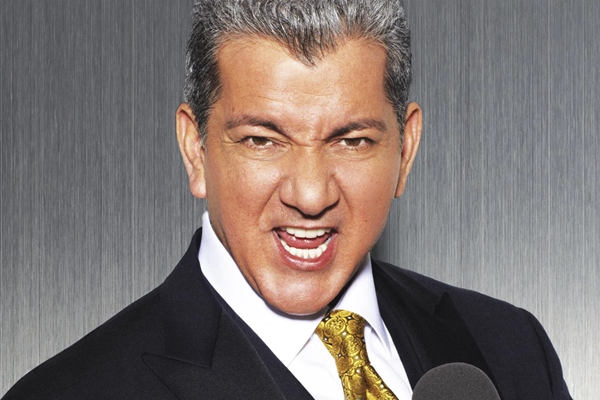 Say what you will about Bruce Buffer, but be sure acknowledge that he knows how to get a rise out of an audience. This is a talent, but it’s not one Buffer didn’t have to harness and develop. Other mixed martial arts announcers don’t (or can’t?) achieve the same effect Buffer does.

Consider Bruce Buffer. How does he do this? How did he learn to do this? What shaped a sly former printer toner salesman into a key strand of the modern UFC’s very DNA?

In his new book, “It’s Time: My 360-Degree View of the UFC” (Random House/Crown Publishing, $25), the man behind the bellicose, sometimes velvety “Voice of the Octagon,” thoughtfully curates his life to share anecdotes that answer these questions, and many others you wouldn’t have thought to ask.

Readers learn the disparate places and sources from which Buffer honed his ability to grab attention. He harkens to his days working in the “Boiler Rooms” -- drab cubicle farms in California teeming with sharp-tongued hawkers -- moving generic paper toner and amassing a small fortune in his early 20s.

“If you could craft the right pitch, you could sell anything,” Buffer writes, “because people love hearing they’re about to save money on something they most desire.”

And what could the MMA consumer desire more than a highly anticipated UFC main event that is seconds from popping off? By that point, most of the selling is done, but it’s Buffer’s fighter introductions that consistently put it all over the top, make you feel as if something special is about the happen. If he wasn’t there to deliver that go-home bellow, you would notice it, and something will have been lost. All these years later, Buffer’s still closing the deal.

For Buffer, there’s an exacting routine that leads up to this moment. For a fight card in Las Vegas, he gets in around 1 p.m. on weigh-in day and begins collecting fighter bios for his cue cards, which he whips to the ground in between introductions, a gesture in keeping with the attitude of the UFC brand. He eats a power breakfast on fight morning, seeks out a steam room to calm his vocal cords, and pours a small cup of honey to coat his throat before screaming the main eventers into action.

Notes on craft aside, Buffer -- who bartered his spot as the UFC’s full-time announcer in exchange for answering the company’s harried call for a cage announcer for a “Friends” episode -- conveys what it’s like to interact with the giants of the sport outside of the cage. From Tito Ortiz to Jon Jones to Pat Miletich, Buffer shares stories that illustrate that ways in which MMA fighters are homogenous, and the ways they aren’t. Buffer may be a chronic name-dropper, but that’s ok when it comes to MMA, because fighters seem to genuinely turn to him for his advice, or at least accept it graciously. There’s a fun story about a pre-champion Jon Jones wandering the Las Vegas strip in search of an ATM, and Buffer imploring him to consider that no future champion should ever be in such a pedestrian predicament.

Particularly memorable are Buffer’s descriptions of how he’s conducted himself when scraps among fighters have broken out in front of him, in the streets or at parties, including Ortiz’s fabled 2002 altercation with Lee Murray in London.

“I would never want to be involved in a bathroom fight,” Buffer surmises at one point in the book. “Too much porcelain. Too much tile. Too many ways to split your skull open.”

There’s a certain self-awareness about Buffer that comes through in the book, and it belies his always-on personality. He acknowledges the seediness associated with many of the industries in which he’s worked and worlds in which he’s traveled, from telemarketing to talent representation. Reflecting on his pre-UFC days in the boiler rooms, Buffer doesn’t sugarcoat the intentions and motivations at play.

“I’d just become a member of a club that would be familiar to many people today: people who sit in cubicles in giant rooms, grafted to headsets and autodialers, selling everything under the sun -- copier toner, yes, but also stocks and bonds, real estate, dream vacations, vitamins, protein shakes, cars, and even pets,” Buffer writes. “If you could craft the right pitch, you could sell anything, because people love hearing they’re about to save money on something they most desire.”

One has to think that these experiences played a role in Buffer’s honing his ability to grab and hold people’s attention.

The book at times veers into self-help entreaties, perhaps an appreciated gesture for some, but also one worries it comes at the expense of more fun anecdotes from the front lines of the fight world. Buffer shines not when holding court on how to succeed in life, but when channeling the savvy he developed in other ventures to shed light on how and why the UFC machine works, from Dana White’s vision, to the discipline manifested in weight cutting, to the importance of a securing consistent channel and time for fans to find the product.

The crispness of writing and word choice in the book is a pleasant surprise. Buffer’s father, a corporate VP type with a passion for writing and Hemingway, drilled into him an appreciation for words and poetry. It’s a twist when Buffer suddenly hits readers with his favorite verses from Kipling and Dylan Thomas. His poetic description of saying goodbye to his dying father adds an emotional weight to the book, and a texture to Buffer’s seemingly endless buoyancy.

For those who appreciate the role Buffer plays in mixed martial arts, his book will add new dimensions to your understanding of who he is, who he’s been, and how he does what he does.
« Previous Book Review: Georges St. Pierre, ‘The Way of the Fight’ Next Book Review: Ronda Rousey’s ‘My Fight/Your Fight’ »