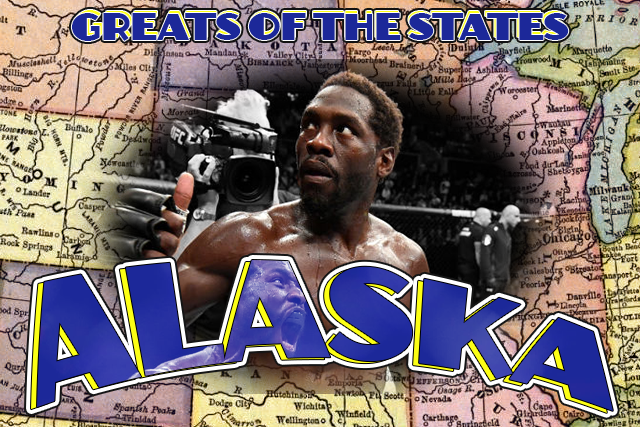 In the five years since the original “Greats of the States” series ran, perhaps no state has made strides quite like Alaska. For the first two decades of the modern no-holds-barred era, notable fighters from the 49th state were few in number, and many were native Alaskans who came to prominence only after leaving, such as Hoger (Iowa, then Texas) and Varelans (California). Above them all stood McKenzie, who was at least a purely home-grown talent, but entered Season 12 of “The Ultimate Fighter” as a curiosity, and went on to become notable for mostly ridiculous reasons.

Since then, “The Last Frontier” has become a new frontier for MMA talent. An explosion of gyms and several solid regional organizations has led to an influx of Alaskan talent to the Ultimate Fighting Championship and other top-level promotions. Simply put, enough good fighters have come out of Alaska in the last few years that it’s no longer surprising or noteworthy. That’s a good sign.

In January 2016, when this article’s predecessor was published, Jared Cannonier was 7-1, a mildly promising but somewhat anonymous heavyweight prospect who had wrecked shop in local Alaskan shows before joining the UFC, then been knocked out by Shawn Jordan in his Octagon debut. Even in a state whose MMA contributions were as lean as Alaska’s were at the time, Cannonier likely didn’t even show up on author Mike Sloan’s radar. Since then, “The Killa Gorilla” has been rising through the ranks while dropping through weight divisions. After decent runs at heavyweight and light heavyweight, Cannonier has found a home at 185 pounds, where he might have been one win away from a title shot before being turned away by Robert Whittaker last fall. Despite that setback, the 37-year-old remains solidly entrenched in the middleweight Top 10, which is more than enough to earn him the title of the most accomplished mixed martial artist from Alaska.

While McKenzie’s “TUF” accomplishments and 3-4 UFC record are still good enough to make this list, a new generation of Alaskan fighters is hot on his heels. Lauren Murphy has risen to the cusp of a title shot in the UFC flyweight division, which didn't even exist until 2017. Gina Mazany’s modest Octagon record belies that she looks like a different fighter since dropping to 125 pounds, while Uros Medic came to the Octagon through Dana White's Contender Series and destroyed Aalon Cruz in March. This list might look quite a bit different in another year, let alone another five years.