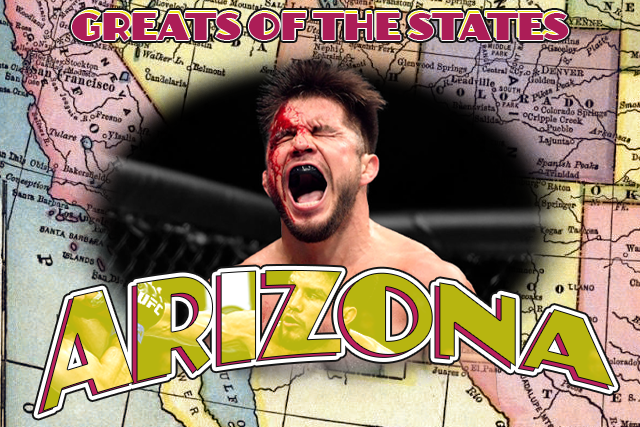 Editor's Note: This column was amended after plenty of readers let us know in no uncertain terms that Cejudo, despite the humble East Los Angeles origins that make up such a major part of his back story as an Olympian and MMA champ, is more properly associated with Arizona, where he has lived and trained for most of his life.

When the original series article was published in January 2016, Cejudo was 10-0, the last four coming in the Ultimate Fighting Championship cage. The most recent of those victories, over Jussier Formiga, had marked his arrival as a true title contender. "The Messenger" hit a wall in his next two fights, being obliterated in his attempt to wrest the title from Demetrious Johnson, then losing a split decision to perennial No. 2 guy Joseph Benavidez in a bout marred by a point deduction for low blows on the part of Cejudo.

After those back-to-back losses, however, Cejudo embarked on one of the more impressive runs in MMA history, winning his next six fights in a row and becoming the first UFC fighter to simultaneously hold two titles and defend both. Along the way, he defeated Johnson, the consensus greatest flyweight of all time and one of the best pound-for-pound fighters in the world, as well as T.J. Dillashaw and Dominick Cruz, arguably the two best bantamweights of all time.

After defending the bantamweight belt against Cruz in May 2020, the 33-year-old Cejudo walked away from the sport, relinquishing both of his belts and declaring himself retired. What seemed at the time like a potential publicity stunt or bargaining tactic has thus far proven to be an earnest departure from fighting. Only time will tell if Cejudo graces the Octagon again, but his achievements to date are already enough to certify him the most accomplished mixed martial artist to hail from "The Grand Canyon State."

At No. 2 there is Henderson, who topped this list in 2016. Since then, the former Ultimate Fighting Championship and World Extreme Cagefighting lightweight champ took off for Bellator MMA, where he was expected to be a contender at 170 as well as 155 pounds. That turned out to be the case — he has fought for both titles — and while he has fallen short thus far in his quest to add another belt to his trophy case, his 5-5 record in Bellator has come against some of the best fighters in that promotion.

Behind Cejudo and Henderson, there is a bit of a logjam. Velasquez has fought just twice since the original series, with a dominant win over Travis Browne and a devastating loss to Francis Ngannou, and appears to be retired for good. However, he remains on the short list of the greatest heavyweights of all time, which makes it difficult for any of his fellow Arizonans to pass him. Like Henderson, Bader decamped to Bellator, where he has gone 8-2 with one no-contest on the way to becoming a two-division champion. In the next few years, the biggest threat to pass the leaders might be the new blood: Gaethje is 22-3, with all three losses coming to champions, he won a UFC interim lightweight title and is likely to get another shot at gold within the next year.