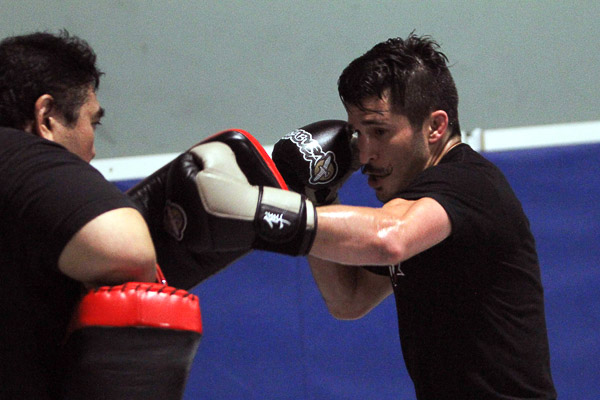 Ian McCall, on “Beatdown,” discussing his disdain for Louis Gaudinot

Louis Gaudinot File Photo
“There’s one certain person, after this [UFC 163 bout against Iliarde Santos], I would love to beat the crap out of. … Louis Gaudinot. I want to beat the green off that guy. There’s something about him. [I see] his face, I want to punch it. … Your hair offends me. Your style, your ground is garbage. … And honestly, mostly it’s business. My agent said, ‘Hey, we’re not getting this fight. Go call somebody out.’ So I had to pick on somebody. Why not pick on him? Something about him just bugs me. It’s not like he’s ever been a d--k to me or anything. He’s actually been nice to me in person, but he’s known. He’s a name. He’s someone that I know would put up a fight and … maybe we’ll do a hair-off. Whoever loses, he has to shave his head or I have to shave my glorious mustache, which is actually impossible because it’s just like a dictator’s beard, the beard of doom. You can’t even light it on fire. It’s not going anywhere. So he might as well shave his head now and just pray to God that I don’t get my hands on him.”