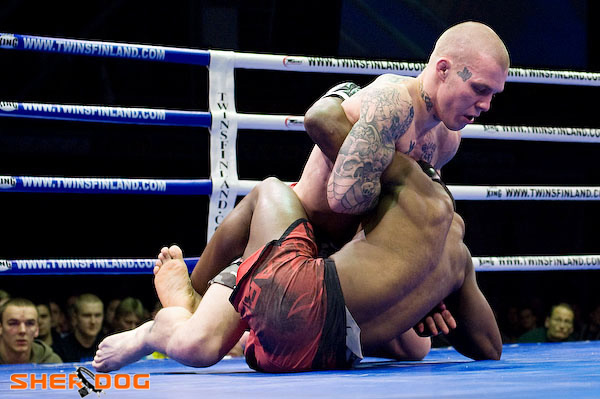 Irish promotion Celtic Gladiator has removed Finnish fighter Niko Puhakka from its Feb. 9 card after an online campaign from an anti-fascist organization.

The Dublin-based fight league Monday issued a statement confirming that lightweight Puhakka, who has long attracted controversy due to his neo-Nazi tattoos and associations, will no longer face “The Ultimate Fighter” alum Wesley Murch at Celtic Gladiator 6 “Day of War.”

Due to the controversy surrounding the fighter Niko Puhhaka, the organisers of Celtic Gladiator decided to cancel the fight that was scheduled to take place on 9 February at the Citywest Hotel in Dublin. Celtic Gladiator have signed the contract with Niko Puhakka basing only on his performance and achievements in sports. We as an organization do not judge our fighter by race, color, religion or beliefs.

Unfortunately, the amount of negative feedback regarding the fighter forced us to make a decision of removing his name from fight card. This, however, does not mean that the fighter Wesley Murch will not appear on the event, he will be assigned a new opponent shortly.
The decision to include Puhakka on the card had drawn criticism from Anti Fascist Action Ireland, who responded to Monday’s removal by winding down their campaign and stating that the organization has “nothing against the sport MMA, just the presence of a known neo-Nazi sympathizer.”

For his part, Puhakka released a handwritten statement last week disavowing any neo-Nazi beliefs and offering to fight in a rash guard.

Here’s what Sherdog.com’s own Jordan Breen had to say on the subject:

Hurrah for socially conscious, grassroots MMA activism. An incident like this incident calls to mind the recent quandaries surrounding fighters like Brandon Saling and Dan McGuane. Puhakka has gone to lengths to cover up-and-or-atone for his Neo-Nazi past -- his infamous “Blood and Honour” tattoo was covered up, along with others, as he mentions in the hand-written letter -- but it does so little in combating the “Nazi fighter” stigma that has shrouded him for years.

Puhakka did the best thing possible in trying to start a new chapter in his life, though I would advise a word processor and an English-Finnish fluent copy editor next time. But, Celtic Gladiator are a promotion selling a fight product, and it would have been reckless and negligent for them to not respond to fans petitioning them.

There's never an easy solution in a situation like this, so, here is a slightly-related James McSweeney joke: RethinkTheInkLaserTattooRemoval.com.