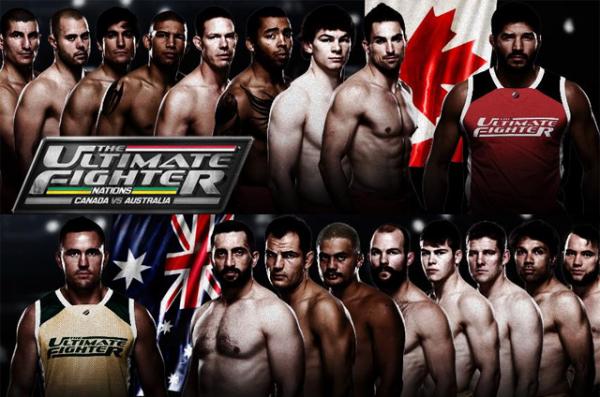 The time had finally come.

Standing on the edge of the mat knowing that I was up next felt like a huge weight had been lifted off my shoulders. The roller coaster of emotions during each fight pick, not knowing whether you’re fighting or not, was beginning to take its toll. It may sound weird but I missed the good, old-fashioned stare down, the moment when you try to look into your opponent’s eyes and instill fear into them.

The wounds from Daniel Kelly’s loss were still fresh, and I was eager to avenge it. The Canadians’ disrespectful reaction to Dan’s fight lit a fire under all the Aussies, and you can see by our reaction that we weren’t afraid to confront them. We were all stoked at the result of Dan’s MRI and we knew he would get stuck back into training as soon as possible.

I had been feeling really good in training, and of course I was confident in the upcoming fight against Olivier Aubin-Mercier. All of the Aussie boys were confident in me as well, which made the result all the more difficult to bear.

On a brighter note, we were sitting in the changing rooms after training and we heard the revving of an engine. At first, we thought it was a motorbike, but instead it was the Forza Motorsport Ferrari. Later, at the house, we were treated to a nice surprise: We all competed in a race on Forza Motorsport 5 where the winner would be driven to training in the Ferrari. It was one race I was gonna win, but Chris beat me by a hair’s length. He said he’d never played before, but for some reason I’m having a hard time believing that.

So, it was fight day and I was feeling good. It felt surreal walking through the doors into the gym. I had never fought in a cage before, and what better way to spend my first time than in a real UFC Octagon.

Then it was fight time. I was fairly nervous about the whole magnitude of the fight and didn’t feel myself, and although I was fit, healthy and strong, my mindset was off. The game plan was to stand up and avoid the clinch, defend the takedowns, stand and bang. Olivier seemed really nervous and wasn’t too keen on my hands, but from there it all went south.

Once the final bell rang, I had a sick feeling in my stomach. I couldn’t believe what I had just let happen. It wasn’t even dealing with my first loss that was heartbreaking. It was feeling as though I’d let the biggest opportunity of my life slip through my fingers, and all because I was so worried about losing rather than winning. The worst part of all is knowing that, if I’d fought, I would’ve beat Olivier on any day.

To all the people out there who have supported me along the way, a big thank you, and rest assured I will come back from this harder than before. It was a costly lesson, but a lesson well learnt.

All the Aussie boys chipped in afterwards and tried to get my spirits up. It didn’t help much at all, but it’s that Aussie mateship that always stands up no matter what.

As always, an Aussie’s spirit can never be broken. Vik Grujic is up next, so I’m going to pick my head up and help him out as much as I can for his fight against Luke Harris. Tune in next week as the Aussies try to come back in the last semifinal fight. There’ll be blood, sweat and tears, as well as a special guest coach!