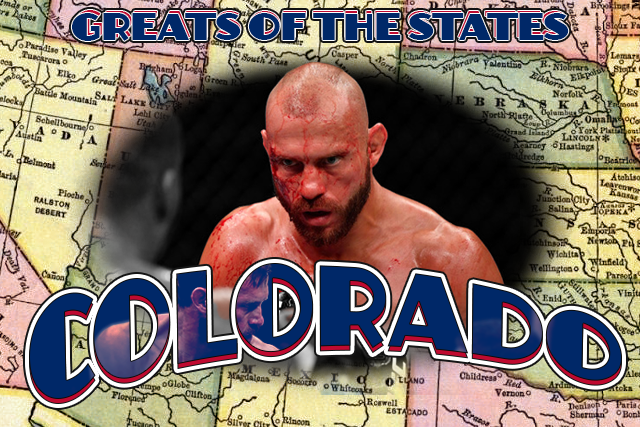 It’s been a rougher ride these last few years, but “Cowboy” remains firmly in the saddle as the greatest mixed martial artist to hail from “The Centennial State.”

When the original “Greats of the States” article was published in February 2016, Cerrone was in the middle of his career-long assault on the UFC record books and already something of a living legend, a fan favorite for his all-action style and “anyone, anytime, anywhere” approach to fighting. That he managed to pick up all those post-fight bonuses while staking his claim in the Top 10 of the deepest division in the sport was incredibly impressive.

Cerrone had just been turned away in brutal fashion in his attempt to unseat UFC lightweight champ Rafael dos Anjos, and in his next fight he would move up to welterweight, where he tapped out the UFC’s other “Cowboy,” Alex Oliveira. He has bounced back and forth between 155 and 170 pounds ever since, and while his 8-9-1 record since then looks pedestrian on paper, even with the draw later overturned to a no contest, he has faced a brutal slate of opposition in that time.

Behind Cerrone, the pack may not yet be gaining, but it is absolutely growing stronger. Bob Sapp is a legendary cult figure for a variety of reasons, but much like Eric "Butterbean" Esch for Alabama, it isn’t a great sign if he is on the short list of most accomplished fighters from your state.

Fortunately for Colorado, a crop of excellent fighters has come along in the last five and a half years. Leading the charge is Sandhagen, who was an anonymous 2-0 prospect in February 2016 and is now an elite bantamweight contender in the UFC, having gone 7-2 with losses only to current champ Aljamain Sterling and returning former champ T.J. Dillashaw. Also new to the list is Heinisch, whose current losing streak belies the fact that he mauled his way to a Legacy Fighting Alliance middleweight title before joining the UFC and hovering around the edges of the Top 10.

Sandhagen and Heinisch join 2016 honorable mention recipients Ludwig, whose well-traveled career saw him pick up a deceptively high number of notable scalps, and Carwin and Zingano, who fought to the pinnacles of their divisions before being turned away by Brock Lesnar and Ronda Rousey, respectively.