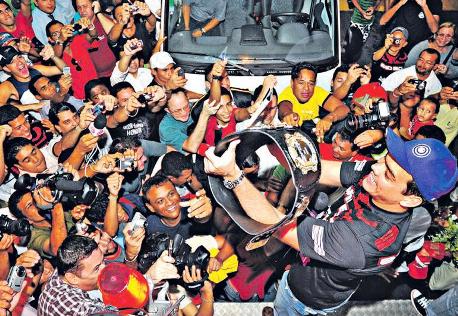 Newly minted UFC light heavyweight champion Lyoto Machida got a hero’s welcome from more than 100 fans that greeted him at Belém International airport this week. The 31-year-old Machida knocked out Rashad Evans in the second round of their UFC 98 title tilt on May 23 in Las Vegas.

“I knew they would have a party for me, but I didn’t expect that much,” said the clearly moved Machida.

Following interviews with a couple of local TV stations and dozens of pictures and autographs with his admirers, Machida, his father Yoshizo and brother Shinzo were taken to their APAM academy in a fire truck. They were trailed by a large caravan that winded through the main streets of Belém (ParÃ¡ state). The streets were lined with fans that screamed “Champion” and toted signs reading, “Lyoto the pride of ParÃ¡, Lyoto our champion.”

“I was born in Bahia, but I came to ParÃ¡ when I was three months old, so I consider myself a Para citizen,” said Machida. “It was such an unbelievable emotion to see the way people welcomed [me] in the streets. Now it’s the most difficult part -- keep the belt.”

Machida arrived at his academy, where a big party was waiting for him to celebrate his 31st birthday.

“It was raining a lot and we got really wet, but people kept applauding in the streets,” said Machida’s father Yoshizo. “We are really thankful for all the support of the Belém people. On Monday, the mayor invited us to a breakfast to thank us for the first world title of ParÃ¡.”

The senior Machida, who trains his son, has been considered a major factor in the undefeated champion’s flawless victory.

“Now is the toughest part,” said the Shotokan karate master. “We have to train hard to keep this belt. Lyoto trained very hard for three months. Now he’ll get some deserved weeks of vacation with his family in the northeast of Brazil. But on June 16, he will be back for training. I think his next fight is already scheduled for October.”

Machida’s father also gave his thoughts regarding a rumored matchup with MaurÃ­cio “Shogun” Rua, who scored a first-round knockout against former UFC champion Chuck Liddell at UFC 97 on April 18 in Montreal.

“He is a very tough opponent, so it’s good for Lyoto,” said the proud patriarch. “Actually we are not worried about opponents. Our training is a little bit different from other fighters. It’s more psychological concentration and techniques. Most people stay nervous, anxious, but we stay calm.”

Guilherme Cruz contributed to this report.