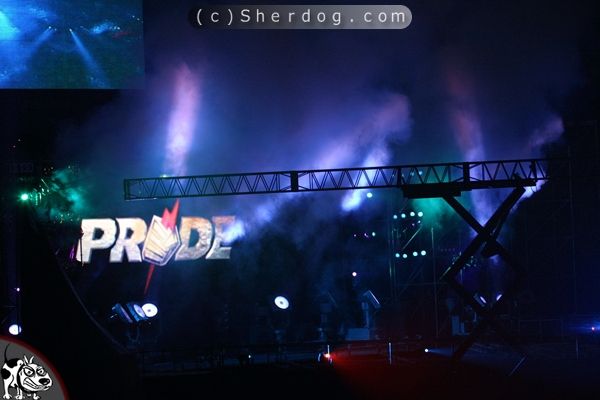 
Advertisement
Mark Coleman, Pride’s first open weight Grand Prix champion, has fond memories of the Tokyo Hilton hotel: great food, beautiful architecture and an atmosphere that seemed to soothe the tensions in the days leading up to fights.

“Then the boss hung himself in a room there,” he says, “and that was the end of that.”

The apparent suicide of 42-year-old Pride chair Naoto Morishita on Jan. 9, 2003 -- by official account, the result of turmoil with a mistress -- signaled more than just the end of good times at the Hilton. It might have also been the day when the then-6-year-old fight promotion became permanently and irrevocably intertwined with the country’s pervasive organized crime sect known as the Yakuza.

“That’s believed to be the point in which Pride was taken over by organized crime,” says Jake Adelstein, an American who spent over a decade covering vice crimes for Japan’s Yomiuri Shimbun newspaper. “There’s a lot of speculation that he was killed and it was a staged suicide. And that’s when the Yakuza decided to move in.”

Unlike the mafia of the United States, Yakuza aren’t content to run local numbers rackets or petty crimes: with a number of families spread across Japan, they have ties to a sizable stable of otherwise legitimate businesses. The scope of their interests has made them possibly the richest criminal organization on the planet.

“They’re the largest private equity group in the world,” says Adelstein. “The Yakuza invest bankrolls in major companies -- companies that have even later made IPOs like Live Door, which collapsed after insider trading scandals. A huge source of early funds was a consumer loan company connected to organized crime.”

When Pride began in 1997 under the direction of production group KRS, it’s likely that Yakuza involvement was limited only to site tax -- promoters would pay a “fee” to run events in crime family territory -- and preferred seating for key players to impress girlfriends. But Yakuza also had ties to talent agencies, which means that some members may have taken special interest in the outcomes of certain bouts. In addition to some suspect performances by standout pro wrestler-turned-fighter Nobuhiko Takada, it was not unusual for foreign athletes to be approached by anonymous benefactors with proposals.

“I had a fight with [judo champion Naoya] Ogawa,” says Gary Goodridge, a veteran of Japan’s fighting circuit. “They were calling my room, calling my home to give the fight to him: ‘Let him win, let him beat you, let him beat you.’ Then we got into money. ‘OK, how much money are you going to pay to let him beat me?’ Finally, it came down to the fact that there wasn’t enough money.” Goodridge says he legitimately lost the fight, but recalls at least one other fighter admitting he was being paid to take a dive.

(The phone calls and harassment were typical Yakuza techniques. “If you threaten violence, there’s a chance they’ll go to the police,” Adelstein says. “That makes for a huge scandal and people can go to jail. Offering him money is not a threat. It’s an offer.”)

By the time Morishita was found dead in 2003, the Yakuza had expectations for Pride beyond premium seating and the occasional manipulation of fights. Pride’s open weight tournament in January and May 2000 might have been perceived as a loss leader for the brand, but in exchange for the immense expense, the promotion was gaining ground on K-1, the popular kickboxing program that continued to draw the most attention of any combat sport in Japan.

“Like anything, they invest money and they take their cut,” says Adelstein. “When Pride became a real moneymaker, I think they decided to take over and see what kind of money they could make off of it.”

“When you’re approached by Yakuza in Japan, it’s not like you’re being approached by a mafia figure in America,” explains Enson Inoue, a Hawaiian-Japanese fighter who speaks freely about his connections with crime families. “It’s a whole different level. The Yakuza here can go from the hardcore syndicate type of guys to guys who are legitimate businessmen, scalping tickets or just extorting small businesses.”

While it’s common knowledge that Yakuza have widespread ties to a large number of businesses in Japan, there is a blind-eye condition Adelstein describes as making all the difference. “There’s the public reputation or image, which has to be preserved, and then there’s the reality. While everyone was quite aware there was an organized crime connection, once that’s revealed, Japan’s sense of propriety demands you do something.”

That revelation came late in 2005, when the Shukan Gendai newspaper printed an accusation by fight industry player Seiya Kawamata that Pride and the Yakuza were heavily invested in each other. That was followed by a story in which it was reported that Kawamata was an active member of the Yamaguchi-Gumi, a Yakuza sub-family.

Kawamata denied the charges and sued the journalist who made the allegations, but the damage was already done. Despite repeated denials by then-president Nobuyuki Sakakibara, the FujiTV network severed its deal with Pride in 2006. Without a television funnel to help fund their events and provide an audience, the promotion couldn’t survive.

On March 27, 2007, Pride’s parent company, Dream Stage Entertainment, announced that it had sold Pride and its assets to Zuffa, the Las Vegas-based fight promoter that had resurrected the lifeless Ultimate Fighting Championship brand beginning in 2001. While Zuffa owner Lorenzo Fertitta promised Pride would continue, there have been no events promoted under the brand to date. Fertitta would later sue the former Pride owners for fraud over a failure to cooperate with background checks and financial document-keeping; Dream Stage counter-sued, saying Fertitta broke the agreement to continue operating.

The lawsuit has yet to be settled, but one thing remains clear: the price of doing business in Japan might be more than anyone can afford.
Latest News
ALLUFCBELLATORPFLONE