TOKYO -- Pancrase wrapped up its 2010 Passion Tour with a championship triple-header at Differ Ariake on Sunday.

Though placed third from the top of the bill, the jewel of the event was the flyweight title rubber match between challenger Mitsuhisa Sunabe and Kiyotaka Shimizu. Sunabe defeated Takuya Eizumi in June 2009 to claim the vacant title, only to lose it to Shimizu eight months later. Shimizu and Sunabe first met in June 2008 in a non-title two-rounder which Sunabe won by unanimous decision.

Sunabe took the first round of Sunday’s affair after a stealing back mount off of his failed takedown attempt, subsequently holding the position for the majority of the round. The champion held tight to Sunabe’s wrists to control choke attempts and punches, but Sunabe exhibited superb flexibility and ingenuity by using the heel of his left foot to strike the side of Shimizu's head instead.

Round two also seemed to favor the challenger, as Sunabe dropped Shimizu with a hard one-two midway through. The dazed Shimizu shot in for a takedown, chasing Sunabe all over the ring as the Okinawan limp-legged and dropped hammerfists to the side of the champ’s head. Sunabe finished out the round by reversing to again take Shimizu’s back.

The final frame favored the champion, as Shimizu landed more punches and low kicks than the slowing Sunabe. The fight almost ended prematurely when Shimizu’s pinkie finger found its way into Sunabe's right eye at the 4:01 mark, but Sunabe was able to continue until the bell after a brief checkup.

Despite giving Pancrase fans another riveting three-rounder, the fight ended in a bittersweet split draw. Judge Kenji Kosuge scored the match 29-28 for Shimizu, while judge Yoshinori Umeki saw it 29-27 for Sunabe. Judge Ryogaku Wada ruled the bout a 29-29 draw.

Having retained his title, Shimizu announced post-fight that he will participate in Sengoku's Dec. 30 “Soul of Fight” event, though he made no indication of who his opponent would be. 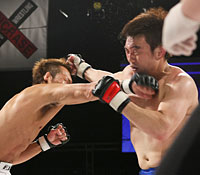 T. Irei
Fujii (left) blasts Kondo.
In other championship action, Rikuhei Fujii emerged as the newly-crowned middleweight King of Pancrase, taking the title from Pride veteran and longtime Pancrase mainstay Yuki Kondo. The bout was a rematch of a September match under the Cage Force banner, which Fujii also won.

Fujii played the aggressor in the first period, charging into Kondo with punches and ultimately landing in the clinch. Against the ropes, both men traded knees for a largely even round. Kondo landed punches of his own to open a cut at the corner of Fujii’s right eye in the second frame, but he clearly began to tire under the challenger's sharper punches and pressure in the clinch.

Kondo’s fatigue became most evident in the third stanza, whereupon Fujii wrangled the veteran to the canvas early. From half-guard, Fujii pinned Kondo down and smashed with short punches as the champ gasped for air like a fish out of water. Kondo was only able to get back to his feet in the final seconds, where the middleweights traded blow-for-blow until the bell.

For his physically imposing performance, judges Masato Fukuda, Kosuge, and Wada all ruled the bout 30-29 in favor of Fujii.

In the evening's main event, newly-appointed Pancrase president Ryo Kawamura retained his light heavyweight title in a draw against Yuji Sakuragi, who brutally knocked out Kawamura in a September non-title bout.

Round one saw the champion circling the outside while Sakuragi lobbed low kicks and spinning back-kicks to the guts. Sakuragi dropped Kawamura to a knee midway through the period with a sharp one-two, but could not capitalize in time to finish. Realizing that his timidity cost him the first round, Kawamura took off the figurative gloves in the second frame, engaging Sakuragi with stiff jabs to the face and hard straights to the body.

Despite Kawamura eating a spinning back-kick to the face, the champion maintained a steady stream of jabs to continue scoring in the last frame. Sakuragi slammed hard combinations and low kicks into Kawamura early, but became even more flustered by Kawamura’s evasiveness and jabs in the final minutes. Sakuragi closed the round by throwing a spinning cartwheel kick, which Kawamura caught, allowing the champion to land in side control for the final ten seconds.

Judges Yoshifumi Oyabu and Umeki both ruled the bout a draw, with scores of 29-29 and 30-30, respectively, while judge Fukuda was the only dissenting voice, submitting a 29-28 ballot in favor of Sakuragi. 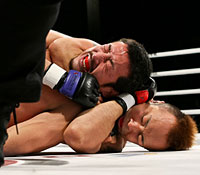 T. Irei
Arai refused to tap out.
In his final MMA bout, Kenji Arai was dispatched of in a scant 24 seconds by Sengoku veteran Tomonari Kanomata. Kanomata scored an instant takedown and quickly transitioned to Arai's back, where he sunk in a rear-naked choke. Rather than tapping out in his retirement bout, Arai went out on his sword, forcing referee Umeki to jump in and pry Kanomata off of the unconscious Arai.

Elswhere, Masahiro Toryu spent four frustrating minutes trying to bully Keiichiro Yamamiya before finally putting the Pancrase journeyman away in the final ten seconds with a thunderous head kick. Toryu’s kick sent a glassy-eyed and stiffened Yamamiya into the ropes, allowing Toryu to land one more punch just as referee Kosuge dove in for the save at 4:51 of the first.

The first round of Katsuhiko Nagata and Koiji Oishi’s bout saw the Dream veteran bullying Oishi into a corner with dirty boxing from the single-collar tie. With the added stress of accidental headbutts and kicks to the groin in the second, Oishi surprised by taking Nagata down early in the period. Despite a very physical and aggressive bout, only judge Kosuge gave Nagata the 20-19 nod, while referee Wada ruled it 20-19 for Oishi. Judge Fukuda scored it 20-20 draw for the split draw.

In the evening’s sole women’s bout, Akiko “Bettyco” Naito gave resident Pancrase ladies fireball “Windy” Tomomi Sunaba a close two-round scrap. Naito used front and low kicks to keep Windy at a distance, but in a contest of punches, Tomomi punished Naito to close out the first frame. The second round saw “Bettyco” make a better case for herself, however, as after eating more “Windy” punches, Naito got the takedown to steal Sunaba’s back. Unable to finish “Windy,” judges Fukuda and Kosuge saw fit to award Sunaba the 20-19 nod, while judge Oyabu was less certain, entering a 19-19 scorecard.

Seiki Ryo lamped Daisuke Watanabe early, putting him away with a flurry of punches at a mere 23 seconds into the first period. Though not completely out, Watanabe protested the stoppage while still on the canvas, but was not allowed to his feet by referee Umeki.