SAO PAULO -- Virtually forgotten amidst the “The Ultimate Fighter 12 Finale” and Strikeforce “Henderson vs. Babalu II” madness, Bitetti Combat held its eighth card on Saturday night in celebration of Sport Club Corinthians Paulista’s 100th anniversary. Surprisingly, the gymnasium was at less than half-capacity, but the present crowd got their money’s worth after being treated to an entertaining night of fights.

In the main event of the evening, talented light heavyweight Glover Teixeira used the same formula for three rounds to dominate Spain’s Daniel Tabera. Teixeira took Tabera down in the beginning of every period and proceed to pound Tabera from the top. The Spaniard managed to stand back up on a few occasions, only to be taken down again and endure more punishment from the Brazilian. Despite achieving the mount position in all three rounds, Teixeira was unable to finish Tabera and settled for a unanimous decision win. It was Teixeira’s ninth straight victory and Tabera’s third consecutive loss.

“Tabera protected himself very well,” a contained Teixeira said after the event. “I was training for a fight in [Canada’s Maximum Fighting Championship], where I’d be able to use elbows on the ground. I couldn’t use elbows here tonight, and that was a bit frustrating.” 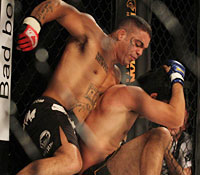 M. Alonso
Filho picked up a win.
Former WEC middleweight champion Paulo Filho used his world-renowned jiu-jitsu skills to control Japanese journeyman Yuki Sasaki and earn a unanimous decision in the show’s co-main event. Filho repeatedly took Sasaki down, suffocating the Pancrase veteran with strikes and a plethora of submissions attempts, all of which Sasaki managed to escape. Coming off of an October loss to Marcos Rogerio “Pezao” de Lima, Filho seemed content to simply stay on top of Sasaki toward end of the fight, cruising to the decision win.

The best fight of the night was a bloody brawl between former “TUF 11” applicant Jordan “Mata Ele” Smith and Mario “Soldado” Sartori. Both fighters began the bout feeling one another out, but Smith quickly started to impose his striking game on Sartori, mostly with kicks to the Brazilian’s lead leg. Smith would then knock Sartori down with a strong right cross to the temple, to which the CM System product responded by taking Smith down. The American worked himself back up after a few seconds and the pair spent the rest of the round standing up, with Smith getting the better of most exchanges.

The second stanza began right where the first ended. With current Strikeforce light heavyweight champion Rafael “Feijao” Cavalcante in his corner, Smith dropped the Brazilian with another right hand, but “Mata Ele” couldn’t finish the fight on the ground. Sartori stood back up and pressed ahead, flooring Smith with a beautiful four-piece combo right around the three-minute mark. Smith tried to grab Sartori’s legs to put him down, but ended up in the middle of a very tight triangle choke. Smith spent the rest of the round defending the choke and bleeding all over “Soldado’s” body.

Both fighters were visibly tired at the beginning of the third frame, but Sartori was clearly in worse shape. Smith connected with hard punches during several exchanges, and then turned up the pressure when the Brazilian appeared wobbly. With about a minute to go in the fight, Sartori turned his back on his opponent and ran, much in the style of Chris Horodecki in his fight against Anthony Njokuani. Smith chased Sartori down with punches, got him to the ground, and finally submitted the Brazilian with a rear-naked choke at 4:36 of the last round.

In the grudge match of the evening, Viscardi Andrade made quick work of Rio Heroes veteran Flavio “Sobrevivente” Alvaro, brutally knocking him out just 34 seconds into the opening frame. Andrade weathered an early flurry from Alvaro, but the Chute Boxe fighter kept pressing forward. On the second exchange of the fight, Andrade connected with a monster right cross square to the jaw, knocking Alvaro unconscious even before he hit the ground. Andrade hit Alvaro’s chin with three more strong punches before referee Osiris Maia managed to put an end to the bout.

“People talked a lot of stuff before the fight and created this animosity between me and Alvaro. It’s unfortunate, because I always had a good relationship with him,” said a relaxed Andrade after the fight.

Predictably, Argentina’s Guido Canetti walked to the cage amidst a loud chorus of boos for his scrap against CM System founder Cristiano Marcello. As it turned out, Canetti’s entrance almost lasted longer than the fight itself.

Marcello needed about a minute to find the right moment in which to close the distance and clinch with Canetti. From that point on, it was a Brazilian jiu-jitsu clinic, as Marcello secured the takedown, established top position, and capitalized when the Argentine gave up his back while trying to stand back up. Marcello finished the fight with a rear-naked choke in only at the 1:52 mark.

“My gameplan was basically not exposing myself, because I’m fighting again next Friday in Jordan. I was trying to avoid getting cut,” explained Marcello.

In the other bouts of the night, Thiago “Jambo” Goncalves won a unanimous decision over Deep and Pancrase veteran Eiji Ishikawa in a lackluster affair.

Argentina’s Luciano “Izzy” Correa got a technical knockout win over Eneas Goncalves after the Brazilian signaled to the referee that he had sustained a broken rib during a takedown by Correa. The end of the bout came three minutes into the opening round.

After enduring some heavy punishment in the first round, Matheus Serafim came back strong for the second frame, stalking a gassed Tomas Saldiva all over the cage. Serafim was able to get Saldiva to the ground and slowly worked his way to the mount position, where he spent almost a full minute landing heavy punches. Referee Roan Carneiro rescued Saldiva with only four seconds remaining in the round.

In the opening bout of the evening, Antonio “Toninho Furia” Glaristone thoroughly dominated Eduardo Santos for the first five minutes, landing from the top while eating a few upkicks in the process. In between rounds, Santos complained of a dislocated shoulder, but came back to the second round after the cageside doctor apparently put the shoulder back into place. However, after being taken down by Glaristone, Santos quickly asked the referee to stop the bout because of the injury, giving the Brazilian Top Team product the win 60 seconds into round two.