Some fights turn slowly, their true natures being revealed only toward the end of 15 or 25 minutes. Some fights turn on a dime, with short and brutal outbursts that leave no questions as to the winners. Some fights, like Patrick Barry’s win over Joey Beltran at Saturday’s UFC “Fight for the Troops 2,” have a bit of both.

Inside a repurposed hangar at Fort Hood near Killeen, Texas, the heavyweight contest began very much as expected. Barry, a former K-1 kickboxer with a sanshou background, took to the center of the cage and stalked Beltran, a heavy-handed brawler with a grappling base. Barry moved with short steps, staring and feinting, occasionally adjusting the fabric on the front of his trunks as though he was preparing to launch his leg. Before Barry could mount any offense, however, Beltran closed the gap.

Soon after, Barry found himself being grated against the cage by Beltran, who leaned his 6-foot-1, 230-pound frame onto his adversary as he stomped Barry’s feet and dirty-boxed. Beltran’s plan to control and slow the action worked for a minute, until referee Mario Yamasaki separated the fighters. Once again given space to work with, Barry flicked crisp kicks to the left leg of Beltran. After only two such attacks, the “Mexicutioner” began moving a bit more gingerly on the limb.

Wisely, Beltran negated the space between him and Barry, mugging the Roufusport representative with a barrage of uppercuts before shoving him into the fence. An inside knee from Beltran appeared to graze the cup of Barry, who vocalized fruitlessly to Yamasaki. One minute later, the same knee landed again and a visibly peeved Barry was given time to recover. After he had, Barry left his neutral corner with a scowl on his face and reluctantly touched the outstretched glove of Beltran. When the round ended 20 seconds later and Beltran turned away, Barry glared at the back of his head.

It was a fairly even and relatively uneventful opening period, a fact which Barry put down to both fighters’ refusal to deviate from their game plans.

“So, when the bell rang, he walked backwards, towards the cage. That’s a trap. I don’t know if anyone noticed that, but I was supposed to run at him and go, and boom, take him down to the ground and get put up against the cage. So I stood on that circle. That was the game plan: I’m gonna stand on this blue circle in the middle of the Octagon and you’re gonna have to come to me. But yeah, for the first part of the fight, the first round, he didn’t come to me.” 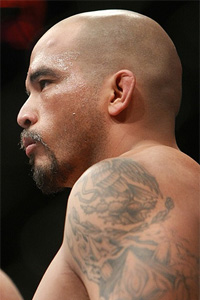 File Photo
Beltran (above) stuck to his plan.
The second stanza started similarly, but after a few more sharp Barry leg kicks, Beltran slowly began wading into range. Barry fired off high kicks which glanced off his taller opponent’s forearms, mixing in clean-landing jabs. Beltran tied up behind a flurry of wild punches, and again stalled out as he tried to bully Barry into the cage and drag him to the mat.

With 90 seconds to go in the second, Beltran was limping badly from the accumulation of kicks to his left knee. He ate a left head kick and a hard uppercut from Barry, who barely flinched as Beltran returned fire. In the late seconds of the round, Beltran strung together some combinations and drilled Barry with knees from the clinch. This time, when the horn blew, Barry reached out his hand to Beltran in a friendly gesture, apparently more pleased with the scrap their fight had become.

While Barry had likely done more damage through the first two rounds, they were still close. The third frame would prove pivotal.

Barry opened the final five minutes by bouncing a pair of left kicks off Beltran’s dome. Undeterred, Beltran moved forward on his one good leg, shooting for single-legs which Barry sidestepped. He managed to corner Barry and dig a few uppercuts to his ribs before returning to his foot-stomping and thigh-kneeing clinch work. Dirty boxing bloodied the nose of Barry, who managed to create some space, only to be shoved back into the fence as Beltran caught an incoming low kick. With two minutes left to fight, they once more stalled out and were restarted by Yamasaki.

Barry was in the midst of pouring more kicks onto the lead leg of his foe when he stuck Beltran in the left eye with a stray finger from his outstretched hand. Beltran wheeled back and fell to the canvas in pain. Seconds later, he answered incorrectly as the cageside physician asked how many fingers he was holding up. Given another chance, Beltran passed the test and was allowed to continue. The fight, however, was about to turn definitively in Pat Barry’s favor.

Immediately after restarting, Barry got busy with low kicks, swinging his right leg repeatedly into an area just above Beltran’s left knee. Beltran caught one and attempted to use it to tie up, but instead ate a jumping knee and another low kick. As Beltran buckled and went to the mat, Barry kept after the damaged stem, hammering Beltran’s knee and thigh with his fist. Beltran clung on to survive as Barry moved into mount and eventually stood back up. In the last 30 seconds, he clubbed Beltran with further head kicks, body blows and low kicks.

As the final horn blew, Beltran collapsed to the mat. Barry was unable to finish his man, but he had done much to seal the fight in the waning moments. Judges Brock Groom, Chris Lee and Cecil Peoples saw the match unanimously for Barry, who commented on Beltran’s tenacity in a postfight video interview on UFC.com.

“That guy is a zombie, man. He was a real, live zombie,” said Barry.

Something to remember, in case of a zombie invasion: low kicks won’t stop them, but will sure slow them down. According to Compustrike, while Beltran out-struck Barry 95-70 overall, Barry landed 35 of 40 attempted leg strikes. Barry chopped the base out from beneath Beltran, slowly turning the fight in his favor before driving home the win when it mattered most.