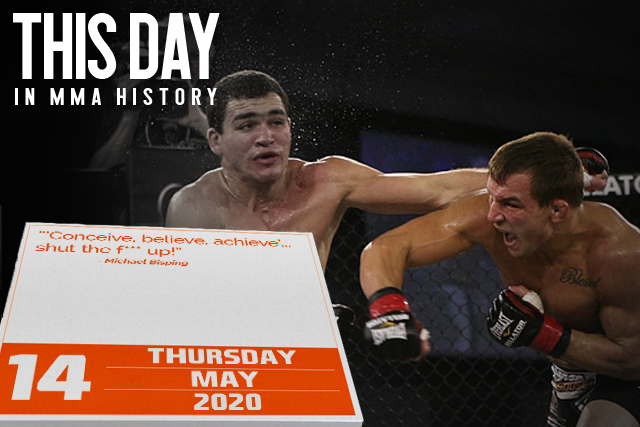 In May of 2011, Michael Chandler was one of the hottest up-and-coming prospects in mixed martial arts, a former All-American wrestler at the University of Missouri who had racked up a 7-0 professional record, the last six of those wins in Strikeforce and Bellator MMA. The 25-year-old “Iron Mike” was one of the earliest examples of Bellator’s penchant for signing amateur wrestlers and developing them patiently, a trademark of the promotion that continues today with such standouts as Ed Ruth and Logan Storley.

At Bellator 44 on May 14, Chandler faced Patricky Freire in the final of the Season 4 lightweight tournament, with a shot at Eddie Alvarez’s 155-pound title on the line. “Patricky Pitbull” was a promising prospect in his own right, a 9-1 slugger just a few months younger than Chandler, who had blown through tough veterans Rob McCullough and Toby Imada with vicious knockouts in the first two rounds of the tournament. Chandler prevailed that night by unanimous decision in a fight that was fairly close and extremely testy, marred by two groin strikes by Chandler, the second of which was blatant and damaging enough that referee Keith Peterson deducted a point.

As it turned out, the Chandler-Freire semifinal at Bellator 44 laid the groundwork for two of Bellator’s all-time great rivalries. In the ensuing lightweight title fight at Bellator 58, Chandler upset Alvarez, prevailing via fourth-round rear-naked choke in one of the best fights of 2011. The win vaulted Chandler from prospect to Top 10 lightweight, a status he would retain for most of the next decade. In their rematch at Bellator 106 two years later, Alvarez edged Chandler out by split decision in one of the best fights of that year. The stage appeared to be set for one of MMA’s great trilogies, but Alvarez instead chose that moment to make his long-awaited jump to the Ultimate Fighting Championship, leaving Chandler to duke it out with Will Brooks for the vacant Bellator strap.

The other rivalry birthed at Bellator 44 was with Freire and his younger brother, future two-division champ Patricio Freire. Chandler faced the elder “Pitbull” brother once more at Bellator 157, knocking him out in the first round. By that time, Patricio had already won the Bellator featherweight title for the first of his two reigns, and let his disdain for Chandler be known at every opportunity. The escalating animosity between Chandler and the Freire brothers continued to escalate and on May 11, 2019, the younger “Pitbull” brother knocked Chandler out at Bellator 221, exacting some family vengeance and becoming the promotion’s second-ever simultaneous two-division champion.
« Previous Bellator Welterweight Neiman Gracie Says He Has the Best Jiu-Jitsu in MMA Next Navigating the Unknown »