On Saturday, the UFC put on its second “Fight for the Troops” show to support severely wounded military personnel. While the first event in December of 2008 had many former U.S. Armed Forces members on the fight card itself, that theme was dropped this time around. Instead, “FFTT2” mostly featured the lighter weight classes, with plenty of 135-, 145-, and 155-pound action alongside a pair of heavyweight bouts.

Below, an in-depth look at Saturday’s five main card matches and which fights are likely to be made in the near future for the 10 participants.

What happened: Long known only as a very confident -- perhaps overconfident -- contestant from “The Ultimate Fighter” Season 5, Wiman effectively emancipated himself from his “Handsome” moniker by turning in a career-defining performance over fellow “TUF 5” alum Cole Miller. From the opening bell, both men fought in the way one would want two fighters in the UFC’s ultra-competitive 155-pound division to engage. Midway through the opening round, Miller lost interest in standing and trading with Wiman, who was getting the better of their exchanges. Miller instead tried to pull guard, but was slammed to the mat for his efforts.

Over the next two rounds, Wiman continued to use his strength advantage and tenaciously came after Miller, putting tons of pressure on the American Top Team fighter with vicious ground-and-pound. Wiman’s assault featured a natural usage of the double Mongolian chop, as popularized by the great Kazushi Sakuraba. Entering the third round, as Miller was fighting to survive, Wiman was fighting to finish. The 27-year-old came closest to ending the fight with the same mounted guillotine choke he used to submit Mac Danzig last June. In the end, all three judges rightfully saw Wiman as the winner.

Forecast for Wiman: With his third win in a row and his seventh in the UFC overall, Wiman is zooming in on the upper third of the lightweight division. Now would be a good time to try to book the rematch against Danzig which was originally supposed to go down last September, and which is still an important fight to make after their controversial first meeting. Wiman could also face Rafael dos Anjos, whom he was originally scheduled to meet at UFC 103 before withdrawing with a knee injury. The third option could be a clash with another former “TUF” contestant in Joe Lauzon.

Forecast for Miller: With “Magrinho,” you never know what you are getting. There are times when Miller looks ready to face Top 10-caliber competition, like in his fights against Jorge Gurgel and Ross Pearson. However, Miller can sometimes turn in absolutely forgettable performances, as he did against Efrain Escudero and now Wiman. While he definitely has the skills, Miller is still lacking in consistency -- something that is excusable at a young age, but not for somebody who turns 27 years old in April. To bounce back, he will have to beat a quality fighter such as Terry Etim, Kyle Watson or Donald Cerrone.

What happened: In a battle between a boxer and a brawler, an irregularity may have tipped the scale in favor of the winning Barry. The former K-1 fighter was the more precise striker throughout the fight, but could not get off as many punches and kicks as he would have liked to. Beltran worked the Randy Couture tactic, smartly pressing Barry up against the cage and employing dirty boxing, knees to the legs and foot stomps.

With the scorecards close, the “Mexicutioner” got off to a better start in the critical the final stanza, continuing his superb job of working on Barry on the fence and giving “HD” a bloody nose in the process. After referee Mario Yamasaki separated them, Barry inadvertently poked Beltran with a Chuck Liddell-style forefinger in the eye. The resulting injury break and the final 90 seconds of the match were very unfortunate for Beltran, who was en route to winning the round and the fight, but wound up getting chopped down with leg kicks and being mounted.

Forecast for Barry: The fight everybody would like to see is Barry against fellow former K-1 ace Mark Hunt. Let’s hope the “Super Samoan” can stick around in the UFC long enough to make that fight happen. Other interesting scraps could come against the winners of the Sean McCorkle-Christian Morecraft and Jon Madsen-Mike Russow fights.

Forecast for Beltran: The “Mexicutioner” deserves another chance in the Octagon after the spirited performance he gave against Barry. He could fight Rob Broughton, or the loser of McCorkle-Morecraft or Madsen-Russow. 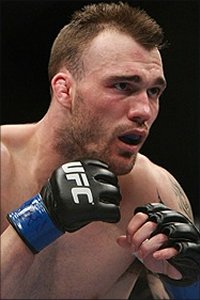 File Photo
Roop (above) got torched by Hominick.
What happened: After improving by leaps and bounds in 2010, the Canadian Hominick destroyed former training partner Roop in less than 90 seconds with three knockdowns. Referee Don Turnage must have thought he was in a K-1 match when he pulled Hominick off Roop, despite the latter still defending himself.

Forecast for Hominick: The Team Tompkins standout will now face champion Jose Aldo on April 30 at UFC 129 in Toronto, a two-hour drive from his hometown of London, Ontario. The “Machine” will have to get his grappling game on the highest level if he wants to stand a chance against the 145-pound juggernaut that is Aldo.

Forecast for Roop: The future is not looking too bright for one of the tallest featherweights in the game. With only two wins in his seven fights under the Zuffa banner, Roop may have to earn his shot at another fight in the Octagon in a smaller organization first. If Sean Shelby shows mercy, fights against Pablo Garza or Josh Grispi, or a rematch with Leonard Garcia, could be possible.

What happened: Former New York Giants defensive tackle Mitrione used his best weapon, the straight left hand, to drop the Canadian Hague twice, before finishing with some explosive ground-and-pound midway through the first round. It was “Meathead’s” third knockout win in four professional fights.

Forecast for Mitrione: The “Ultimate Fighter” Season 10 alumnus is suddenly becoming a fan favorite. Even though Mitrione is showing a lot of promise, his lack of experience makes him difficult to match up. With most UFC heavyweights already signed for upcoming fights or sidelined with injuries, Mitrione could be looking at a match with Rob Broughton at a rumored May show in Glasgow, Scotland. If he does not want to sit out that long, Mitrione may have to take on a debutante.

Forecast for Hague: Having started his second UFC stint with a loss, Hague’s critics will be prompted to claim that the “Thrashing Machine” is too light for the UFC from a sporting perspective. With talented heavyweights being few and far between, it seems likely that he will get another chance to prove his detractors wrong. It may take a short-notice fight where Hague fills in for an injured colleague to do so, though.

What happened: The “Young Assassin” turned in the performance that everyone expected of him against Jeremy Stevens one fight later. Despite a three-fight win streak, Guillard entered his bout with the world-ranked Dunham as the underdog. He left as the first fighter ever to stop the Xtreme Couture prospect.

Dunham did what he said he would and took Guillard down 35 seconds into the fight, but the Oregonian couldn’t keep him on the mat. Guillard eventually knocked him down with a left-right combo and finished him with a barrage of knees against the fence, the last of which was illegal.

Forecast for Guillard: It is time to face former champions or title contenders now. Give him Sean Sherk, Kenny Florian or Takanori Gomi.

Forecast for Dunham: The 28-year-old submission specialist is probably one of the top five fighters in all of MMA currently riding a two-fight losing streak. A third loss would effectively destroy his reputation as a potential top contender and possibly even send him out of the UFC, so the promotion has to be very careful in how they deal with him. Maybe a tune-up fight against Danny Castillo, Waylon Lowe or Cody McKenzie would be the right thing to do now.