Among Mike Goldberg’s usual duties -- sponsor plugs, broadcast generalship, tanning -- is reciting the standard “Rules of the Octagon” narration over a graphic, which states points will be awarded “based on striking, grappling, aggression, and Octagon control.” At 10 seconds in length, this will never be mistaken for an instructional video, but it’s become very obvious that Nevada judges in attendance Saturday haven’t even bothered with that much.

After handling Leonard Garcia for three rounds, pushing Garcia backward, landing while Garcia whiffed in open-mouthed “offense” and even taking a round with a conceivable 10-8 work effort, two judges ignored Nam Phan and scored the bout 29-28 Garcia. (The third saw it 30-27 Phan, cementing his status as human with two functioning corneas.) It stands next to New Coke, “The Phantom Menace” and the Hula burger as one of the worst decisions of all time.

Nothing can suffocate the enthusiasm of fans more quickly than something purported to be “As Real as it Gets” burdened by the inexplicable presence of officials who use a fictitious set of standards to oversee fights. Athletic commissions are assumed to be competent; as we saw with Chael Sonnen’s hearing Thursday, some members can’t even tell the difference between a mixed martial artist and a boxer. At this point, it’s becoming impossible to tell the difference between a fight judge and a brick.

Next for Garcia: Providing a green energy source with his punches.

Next for Jonathan Brookins: Not quite ready for primetime; maybe the winner of January’s Cole Miller/Matt Wiman bout.


The Look at Me Award The anonymous spectator at the Palms who kept screaming out lines from “The Karate Kid” during the Johny Hendricks/Rick Story fight. This was funny in 1995. Briefly. The moment has passed.

The Mr. Rogan Goes to Washington Award Joe Rogan, for publicly taking the Nevada commission to task for their ridiculously apathetic attitude toward the state of judging in MMA. Verbal Vomit Award Mauro Ranallo, for his use of “fistic fireworks” and claiming Henderson “has rung more bells than a monk in a monastery.” Ranallo could be calling the action between Superman and Muhammad Ali on a space station and it would still feel like too much.

College Try Award Mike Kyle, for taking a fight on short notice against Antonio Silva and nearly knocking him out in the first.

The James Lipton Award Lawler, for growing a beard that would make Fidel Castro (and his many decoys) proud.


Who can take commissions to task?

Accountability is what keeps most of us competent. If there’s no one who can audit our behavior, we might begin to behave in a manner that keeps life easy without sweating the consequences. No one in sports is held less accountable than a fight judge -- appointed by the commission, sometimes out of cozy cronyism, and spared any process that could call into question their competency. As Saturday’s Phan/Garcia fight proved, several of these people might need help making sure their chairs are facing the right direction.

Many commissions, like Nevada’s, have members appointed by the state Governor; once those appointments are in place, upper levels of government pay them little attention. You could appeal to the department of state business that typically has ties with the commission, but you again deal with parties of lopsided interest. Hitting them all where it hurts -- the wallet -- would only injure promotions who count on revenue from busy regions. What’s it going to take? Fighters picketing the offices? 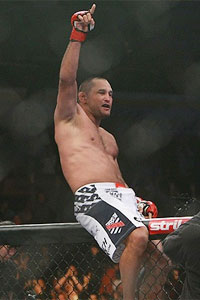 D. Mandel
Henderson still is a threat.
Between the weekend’s judging in Las Vegas and Thursday’s chaotic Sonnen hearing before the California board, MMA’s supervisors have never looked less impressive. The commissions are crafted to keep fighting sports honest. Who keeps the commissions honest?

Is Henderson still a threat?

Henderson, 40 years old and looking every bit the nailed-studded club he was 10 years ago, snuffed out Renato “Babalu” Sobral quickly Saturday, which brought up talk of a title bout with “Feijao.” It was also enough to dim the memory of a poor performance against Jake Shields last April; a weary Henderson, after dropping Shields early, was ground out over five rounds.

But it’s worth noting that most of Henderson’s career-best performances came at 185 pounds, where his imposing wrestling and bullet-forward strikes were a threat. At 205, he’s dropped decisions to Quinton Jackson, was submitted by Antonio Rogerio Nogueira, and had a difficult time with Rich Franklin. Capturing a title in that division shouldn’t be a foregone conclusion.

Is Brookins going to survive?

Brookins won the 12th season of “The Ultimate Fighter” Saturday, but only after a very rocky start: Michael Johnson controlled both the pace in the first round, only to fall off the cliff in the latter two. It was a sturdy performance, but not the kind that makes anyone optimistic for Brookins’ chances in one of the deepest divisions of the sport. He’ll need very small, very incremental steps.

Should Matt Lindland hang it up?

Matt Lindland had one of the all-time poor game plans during the Strikeforce program, settling into the pocket with the younger, faster, and more violent Lawler. Bad things were anticipated, and bad things happened: Lawler landed a right hook and one punctuating ground strike that put Lindland out cold. (Lawler even straightened out the stiffness in his legs, which is a little like a serial killer helping police with a body bag.)

Much is being made over Lindland’s current fight IQ, but two big knockouts -- Vitor Belfort did the same thing to him in January 2009 -- over a two-year period isn’t as harsh a run as other fighters have suffered. Bad match-ups are bad match-ups; Lawler was awful for him. It doesn’t necessarily mean he’s no longer fit for duty.


• After making Scott Smith look like an amateur, Paul Daley told the St. Louis crowd he was interested in a fight with K.J. Noons. It’s easy to see why -- both are disinterested in wrestling -- but Noons doesn’t have a lot of business as a 170-pound fighter. Daley against Nick Diaz is far more interesting.

• More from the bad strategy department: after knocking down Silva and then getting nowhere with hammerfists, Kyle might have been best served by allowing Silva to struggle back to his feet and try to capitalize on his pre-rung bell.

• To help ease the pain of a ridiculous decision loss, Phan split a $60,000 “Fight of the Night” bonus with Garcia. Leonard’s heart is impressive, but his method -- swinging in comically-overcommitted offense -- is a poor representation of technique. I’m not sure it deserves acknowledgement.

• Strikeforce CEO Scott Coker told MMAJunkie.com that he’s optimistic a deal will be reached with Fedor Emelianenko soon. How negotiations can drag out for this long after Emelianenko lost much of his mythical status in a spring loss to Fabricio Werdum is beyond me, particularly when he brings little additional revenue to North American box office or ratings. He’s a great fighter, but not a deity. Enough already.