When you’ve been in the game as long as Pat Miletich has, you need to be either training yourself or training someone else for a fight. If you’re not, you feel like something is not right, that the rhythm of life is disrupted. That’s part of why the 40-year-old Miletich (28-7-2), the UFC’s first welterweight champion and founder of the once-dominant Miletich Fighting Systems camp, took a fight against Thomas “Wildman” Denny. The fight on Thursday night will headline the latest offering from Monte Cox’s “Adrenaline” promotion, which airs live from Moline, Ill., on HDNet.

Two years after a swift loss via guillotine choke to Renzo Gracie in the IFL, Miletich, one of MMA’s most tenured sages, spoke to Sherdog about his return, Brock Lesnar, the illness at UFC 35 that allegedly caused accidents and hallucinations in the cage, and the future of his heralded camp.

Q: What moved you to take a fight now?
A: Well, it’s a couple of different reasons. I’m tired of not competing, something I’ve done since I was five years old. It basically drives me insane to not have goals and not work towards things. I love the adrenaline, love fighting, love the crowd, the fans, things like that. I love the camaraderie of training with a lot of guys and everybody working toward a goal.

Also it’s Monte Cox, who has been my manager for my entire career, doing the Adrenaline shows. It’s nice to be part of that. The show probably wouldn’t have taken place here in the Quad Cities, my hometown, had I not fought on the card. And so that would be one less fight that my guys get. It’s a televised bout, it gives those guys more exposure, so hopefully it will help those guys be seen by more eyes and get some contracts for those guys. They’re all very tough, world-class fighters on the card from my gym. I want to see those guys’ careers move on and do great things.

Q: Why Thomas Denny?
A: It was just something that Monte came up with. He just said, “Thomas Denny’s an exciting guy, he comes out, he gets after it, he sells tickets and puts on a good show, and I think you guys can go out and get after it right away and make the crowd stand up,” and I said that’s fine.

Thomas and I have known each other for years. He and I have always been real friendly toward each other. I never, ever had an issue with him. We always have gotten along real well. As far as his fighting style, I think he’s a pretty well-rounded guy. He got two takedowns on Nick Diaz, which isn’t easy to do. And he slugged with him. That first round was going at a pretty high pace. I’m kind of expecting the same type of thing out of him for this fight, to come out and get after me right away. Which is good, because it will wake me up and make me snap out of my ring rust right away. 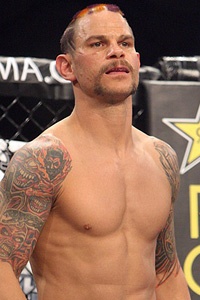 Dave Mandel/Sherdog.com
Why Thomas Denny?
Renzo’s a guy that I really, really like a lot. Every time I see him we give each other a hug. He’s just that kind of guy. Punching him was actually … he was one of those few people where you’re like, “I really don’t want to hit this guy.” But with Thomas, even though we get along real well, Thomas is the kind of guy that’s going to stand and trade with you. So I’m not going to have a problem hitting Thomas. And I expect to hit him a lot.

Q: Who are your main training partners these days?
A: Jesse Lennox, Ryan McGivern, L.C. Davis, Junior Hernandez, who is an incredible boxer, really good at grappling. I’ve also had the help of Pedro Silveira and Rodrigo Uzeda, both very good jiu-jitsu black belts who have been coaching me on the ground and grappling with me a lot, getting me back to basically the way I used to flow on the ground. I used to feel like I could hang with anyone on the ground.

I’ve never really had anyone coach me and train me for a fight ever in my career. I’ve just been part of a team basically and kind of led the practices and all that sort of stuff as a coach. Kind of like Paul Newman in the movie “Slap Shot” so to speak, kind of a playing coach, a fighting coach. It’s been nice to actually have people spending the time coaching me. It’s something that I’ve never experienced really in MMA.

Q: What’s the state of Miletich Fighting Systems in the wake of some of its top names leaving, like Matt Hughes, Robbie Lawler and Jens Pulver? It seems like its dominance has waned.
A: Well, we just have a second generation of monsters who are coming in now who are very well-rounded, very good fighters. Ben Rothwell, Ryan McGivern, Mike Ciesnolevicz, L.C. Davis, Junior Hernandez, Jesse Lennox. Those are the guys that are going to be the champions of tomorrow. It’s just a rebuilding type process. The younger guys are just taking over as the leaders. I was wondering when that was going to happen. I kind of sat around and I waited for it. I did nudge a little bit and tell guys that they need to step it up and become leaders. They’re doing that now. That’s pretty cool to see.

A lot of the older guys have moved on and gotten financial gain from opening their own places and things like that, which you can’t blame people for, for wanting to move out on their own. I mean those guys, all of them were basically with me for 10 years. I was sad to see those guys go, but at the same time guys have to go out on their own. That’s just the natural process of things, and it doesn’t bother me. Matt (Hughes) and I just e-mailed each other the other day and talked and he’s going to be coming up to the Adrenaline fight here in the Quad Cities and hang out with us and stuff. It will be nice see him and Robbie (Lawler).