Bitten by the Acting Bug

With his emergence on the scene at UFC 8 in 1996, Don Frye made an indelible mark upon the mixed martial arts world, both for his fighting prowess and unique style. Rooted in a collegiate wrestling background that included stints at high-level programs at Arizona State and Oklahoma State, Frye utilized a different kind of game than those with his pedigree at the time. He had a better understanding of jiu-jitsu, could operate from his back and did not shy away from trading blows on the feet, even when seemingly outgunned.

His arrival signaled the prototype of what would later become the standard -- the well-rounded mixed martial artist capable of competing effectively at any range, in any position -- and his career in the UFC and Pride Fighting Championships marked him as one of the game’s most entertaining fighters to watch. Carrying a record of 19-7-1 (1 NC), “The Predator” locked horns with some of biggest names of his era, including Mark Coleman, Ken Shamrock and David "Tank" Abbott. Whether it was his thrilling street-style brawl against Abbott in which he won the Ultimate Ultimate in 1996 or his blood-soaked, gutty technical knockout loss to Mark Coleman at UFC 10, Frye always gave fans more than their money’s worth. He currently resides in Tucson, Ariz.

Q: You’ve tried acting lately, appearing in a few productions. How do you like it so far?
A: I’ve made a couple movies. Earlier this year, I made “Public Enemies” and just got done with a small role in a movie called “Number 13” with Jason Statham and Mickey Rourke. It was a pretty good experience.

Q: You’re a fighter. They’re actors. What was it like meeting and working with them? 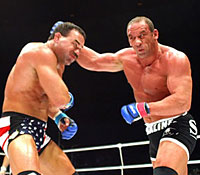 Q: Rourke had a few pro fights. Did you guys talk about the fight game?
A: We sat there and swapped stories. Rouke’s a good ole boy. I really like him. “Godzilla” was my first acting experience. I pretty much was just thrown in there as one of the leads. I played Kevin Douglas Gordon, the captain of a flying submarine. He was gonna try and save the planet.

Q: You debuted at UFC 8. Randy Couture once told me during his first walk into the Octagon he was so scared he nearly wet himself. What was going through your head?
A: I just wanted to win. I’d gotten in there, and that big ole boy entered the cage across from me; they shut the door and locked it. I thought, “Me and my-get-rich-quick schemes.”

Q: Did being a college wrestler give you added confidence, despite knowing there was a lot more thrown into MMA?
A: Oh, yeah. Being a collegiate wrestler is being in a street fight every day for two and a half hours. You’re just scrapping and clawing every day. There’s nothing nobody can throw at you [that] you haven’t already seen, except when they hit you from behind.

Q: You were one of the first athletes to get recognition for being cross-trained. Despite being a wrestler, how did you get a good grasp of the submission game?
A: After college, I did year and half of pro boxing, then I got out of the sport altogether, [and] then I started taking up judo. I was in a bad marriage, and it was a good defense. I was taking judo and picked up the submissions and throws, which worked out well for MMA.

Q: You boxed professionally, as well?
A: I had eight pro boxing matches. Like I said, [I] got into that because, back then, Mike Tyson was a big man, and everybody wanted to fight Tyson. There’s a lot of money being thrown around. Being a white boy, I was one of the great white hopes, but you gotta keep training, or you’re the great white dope.

Q: You were also active back when tournaments were still around. What do you make of the athletes competing then versus the fighters today?
A: That was fun; them boys came to fight. They weren’t there to be TV reality douche bags, and they weren’t worried about their hair. They were there to fight and win. These guys nowadays are just worried about being a TV star, and that’s gonna get your ass kicked.