At first blush, the cancellation of Affliction “Trilogy” seemed like a blessing for World Victory Road, with Sengoku’s “Ninth Battle” taking place at Saitama Super Arena this Sunday in Saitama, Japan. With that unfortunate subtraction, Sengoku was to become the focal point and crown jewel of this weekend’s mixed martial arts agenda.

Instead, the fallout from Affliction and subsequent all-encompassing hysteria surrounding Fedor Emelianenko’s contract negotiations have become a black hole, devouring all attention, emotion, thought, speech and writing. Of course, it’s perfectly justifiable; this is the most significant round of contract negotiations in MMA’s short history. However, that does not make it any less lamentable that there’s an outstanding event on the horizon, and it’s stuck behind an event horizon.

Fortunately, I’ve saved a special Sengoku mailbag from the clutches of a super massive void. Whether these e-mails are real or theoretical is another matter entirely.

I’m sick of you calling me a flake. When I win this tournament in style on Sunday, will you stop criticizing me for having no strategy, fighting stupid, squandering my enormous talent and having the worst entrance music in MMA?
-- Hatsu, Nagoya

That’s a fairly aggressive tone for a guy who claims he was only on the poster for the featherweight tournament because he was “the first guy to be signed.”

Seriously, though, this is a case of show-and-prove. If you march into the final and deal with either Michihiro Omigawa or Marlon Sandro successfully, I’ll back off. If you show you’ve given their strengths and weaknesses in relation to your own some thought -- and fight in a way that reflects that -- then good. It will mean you have come a long way from having kickboxing bouts with fighters you can tool on the ground.

Out of all the globally established weight classes, you may be Japan’s best chance at having a number-one ranked fighter in any division. But you’re the captain of your fate. You just turned 26; I can’t keep making excuses like “this guy is still so young” forever. It’s time to either step up and show you can dominate elite fighters without blowing it against lesser opposition or accept being deemed a flake.

However, the entrance music is non-negotiable. Either stop using that atrocious techno remix of “Moonlight Shadow” or suffer my taunts forever.

I heard that you think I’m due to get knocked out soon. Breen, I’m undefeated as a lightweight, and no one has even come close to stopping my game yet. I am improving all the time. Did you not watch that video on your own site where I completely destroyed Caol Uno in training? I’m going to leglock Hirota in less than two minutes, then lisp through another awkwardly exuberant post-fight interview.
-- Satoru, Tokyo

Well, you are undefeated as a lightweight and have earned yourself top 10 credentials in one of MMA’s best divisions. As a lightweight, you couple smothering physical power with elite-level technical grappling. You’re dangerous on top and on bottom. You’ve got a finesse game and a smash game on the ground. Better still, your arsenal is intriguing: you’re one of the sport’s best leglock artists, yet you also have one of MMA’s best guillotines. Hell, you’ve got a nasty north-south choke that you haven’t even used in MMA yet.

Still, you’ve only fought a small sample of outstanding lightweights so far. I know you’ve worked to improve your striking -- you even knocked down Kazunori Yokota -- but you’re never going to be a lights-out striker. It wasn’t that long ago you were in a life-and-death struggle with Jason Palacios of all people. Even more recently, you were completely inert against Katsuya Inoue, who is now a lightweight himself.

You may put another highlight reel submission on Hirota, which would be another rock-solid win for your resume. However, your fights against top lightweights are always going to be boom-or-bust propositions: either you will hulk your way to a submission or you’ll look completely lost and lose. The competition isn’t going to get any easier from here on out.

You’ve also recently given Sherdog.com some good content and even let us film the often secret and sacred proceedings of real, authentic training. The team player in me is pulling for you. 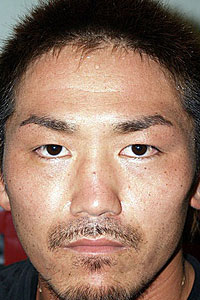 Masa Fukui/Sherdog.com
Misaki's future is in the U.S.
I hit a cop’s wrist with my side mirror, so now my fight purse is being withheld, I won’t get a rematch with Jorge Santiago if I win, and I’m indefinitely suspended following the fight. Why am I OK with this?
-- Kazuo, Tokyo

Why? Because you can go fight in Strikeforce afterwards, until the coast is clear in Japan. You know as well as I do that if it doesn’t happen in Japan, it doesn’t really happen at all for the Japanese public. Now is your chance for an anticipated rematch with Jake Shields. There’s a sentence I never thought I’d write six years ago.

I am Blagoi Alexandre Ivanov, man who defeat Emelianenko Fedor. I promise glorious victory over Fujita Kazuyuki. I am next great heavyweight prospect, yes?
-- Blagoi, Bulgaria

I want you to be great. I really, really do. Heavyweight MMA is always going to be a focal point for the sport, and the deeper and richer the talent pool, the better. You’ve got a natural heavyweight frame, and you’re only 22 years old. Plus, you have a fantastic beard -- an accessory few modern elite athletes embrace.

On the other hand, your claim to fame is beating MMA’s greatest heavyweight in combat sambo, this after he trained for last November’s combat sambo world championships by shooting a D-level action movie in Thailand. Combat sambo is barely even a sport, and despite how quickly many are to elevate it because of Emelianenko’s brilliance in MMA, a cursory glance at any IAFC or WAFC event in Russia reminds you that combat sambo is hardly a breeding ground for elite MMA fighters.

You’re said to be unbeaten in a dozen-some MMA bouts in your native Bulgaria, but your sambo tenure reveals that your striking skills consist of looking at the floor while using your arms like helicopter blades. You’ve trained for this fight by practicing lateral drops with random South Korean sambists.

Your saving grace in this fight is that, for whatever “Ironhead” qualities he may have possessed in the past, Fujita is shopworn beyond recognition. At this point, your wild windmilling may just do the trick. If this was four or five years ago, I’m not sure your fate would be any kinder than Karam Ibrahim’s.