Anyone can use the Fight Finder to discover the winners and losers of the nine contested bouts this past weekend in Atlanta at UFC 88, but there’s more to the story than what the raw data tells us.

Who really won? Who truly lost? What do the results of UFC 88 tell us about the big picture for the UFC and MMA? These answers and more follow.

While the UFC may have lost a substantial pay-per-view payday in what was supposed to be a New Year’s Eve title clash for the light heavyweight strap between dogged TUF alum Forrest Griffin and UFC poster boy Chuck Liddell, the results from Atlanta will still work to position the UFC advantageously over the long run.

First, the UFC has a real opportunity to use Evans to draw more African-American fans into the MMA fold. While everyone respects and loves winners of all races, colors and creeds to varying degrees, it is impossible to argue against proclivities for sameness. Just as the WEC understands bantamweight destroyers Manny Tapia and Miguel Torres are critical to the organization’s efforts to reel in larger portions of a Latino audience, so too is Evans necessary for what is arguably a very underserved African-American demographic in MMA.

Second, losing the Liddell vs. Griffin matchup is only a short-term loss. What’s more important is that the UFC continues to set up competitive matchups and allow the chips to fall where they may. By adopting a strategy where the UFC forces its fighters to continually prove their viability, fights and events themselves become a self-policing mechanism. This not only keeps the UFC product sharp, but it saves Zuffa the heartache of having any faÃ§ade shattered and their promotional and marketing resources squandered by a fighter incapable of earning his keep.

Think about this: Rashad Evans -- the outsized heavyweight, improbable winner of season two of “The Ultimate Fighter” and .500 collegiate wrestler -- owns two of the best knockouts in UFC history. He’s also undefeated.

While Evans has heretofore been unable to garner the fan appreciation and critical acclaim of someone with the aforementioned accolades, last Saturday’s win may be the turning point in his very unsuspecting career. He has passed every test the UFC has thrown in front of him and gone one step further: He has maximized his talent potential, culminating in one of the most magnificent wins of the past several years. What more can be asked of a fighter? 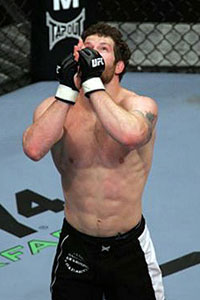 Photo by Sherdog.com
Nathan Marquardt (above) raised
his stock Saturday night with an
impressive technical knockout of
Martin Kampmann.
It’s difficult to conjure up a reasonably accurate scenario where the team of mastermind Greg Jackson and Mike Winkeljohn could’ve fared any better than they did on Saturday night. Not only did Evans fold perennial MMA superstar Chuck Liddell with an overhand right of death, but Nathan Marquardt put himself back in the middleweight title hunt by steamrolling would-be challenger Martin Kampmann on his own kickboxing terms.

Throw in Jardine’s previous win over Liddell and welterweight king Georges St. Pierre’s masterful display against Jon Fitch for good measure, and one gets the sense that Jackson & Co. understand the feeling of accomplishment better than most.

If the defeat of Quinton “Rampage” Jackson by Forrest Griffin at UFC 86 wasn’t evidence enough that “The Ultimate Fighter” is the launching pad for the next generation of top-level MMA athletes, Saturday definitively ended the debate. Not only will winners from two seasons of “The Ultimate Fighter” battle for the most coveted crown in MMA when Evans meets Griffin later this year, but they’ll do so after collectively defeating MMA icons in Jackson, Liddell and Mauricio “Shogun” Rua -- three former kings of the light heavyweight division.

Consider this notice that any and all future questions about the legitimacy of the show and its fighters are only the product of the intellectually dishonest.

An always-promising fighter with well-rounded skills, Pellegrino couldn’t ever seem to break through intriguing-prospect status. Seemingly unable to cobble together the components necessary for a meaningful career inside the unforgiving cage walls of the Octagon, Pellegrino grappled with anonymity and even identity.

Yet, amidst weight-class changes, personal and familial turmoil and gut-wrenching losses, Pellegrino found a way Saturday to persevere through the sort of adversity that would cripple anyone without an indefatigable will to carry on. If there were ever an underdog pick to root for, Pellegrino is it.