From the cozy confines of the Abe-Ani Combat Club, on the top floor of Gold’s Gym South Tokyo Annex in Tokyo’s Ota ward, Hiroyuki Abe and company are busy at work raising a formidable -- albeit adorable -- army of little grapplers, ages 4 to 14.

It is truly a thing of wonder to have a 5-year-old shoot in on you for a double-leg takedown, and then doggedly switch to dragging you down with the single when you prove too heavy. The next surprise comes when scrambling to all fours, said 5-year-old quickly breaks you down limb by limb until it’s easier to roll you for the pin.

That a majority of these youngsters have honed these particular skills to the point of reflexivity, regardless of their opponent’s size or age, speaks to the fact that Abe has successfully bred Japan’s next generation of wrestlers, some of whom are already national champions looking to take over the combat sports world in just a few years.

Notable of these many children is Ryuto Sawada, who at age 14 takes on the unspoken role of the team captain under Abe-sensei. A gold medalist in Japan’s national children’s wrestling competitions, the young Ryu looks forward to expanding beyond wrestling in adulthood. 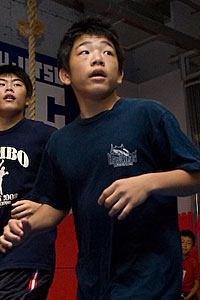 Daniel Herbertson/Sherdog.com
Sakuraba inspired Ryuto Sawada.
“I started wrestling at age four. Around the same time, I saw MMA,” recounts the shy Ryuto of his formative first impression of the sport, and how it pushed him toward wrestling. “It was when I saw [Kazushi] Sakuraba versus Royce Gracie in Pride. It was then that I decided I wanted to do MMA someday.”

As with any proper aspiring mixed martial artist, Ryu has since diversified his training to include disciplines beyond wrestling.

“I do jiu-jitsu and no-gi grappling with the adults too, which I started when I was in second grade,” he says. “I started wrestling at another school, but I started jiu-jitsu here at AACC.”

Naturally, Ryu is not alone in his extra-curricular training pursuits. Often joining him in AACC’s adult jiu-jitsu and no-gi grappling classes are his sister Chihiro and Teppei Jin, both age 12.

With nine years and a green belt in judo under him, Teppei only recently began training in wrestling, coming into the sport thanks to the Beijing Olympics.

“I saw wrestling in the last Olympics on TV and I thought it looked fun, so I decided to start. I stopped judo since I joined AACC to do wrestling, jiu-jitsu, and striking,” explains the 12-year-old Teppei, who cites two-time Olympic gold medalist Saori Yoshida as the freestyle wrestler he most looks up to -- primarily because “she has a winning streak.”

With Tokyo one of the prospective candidates to hold the 2016 Summer Olympics -- a distinction the city last had in 1964 -- Teppei looks forward to seeing his wrestling career culminate by representing his country in the coming Olympiad. 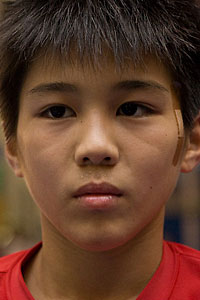 Daniel Herbertson/Sherdog.com
Teppei Jin only has eyes for MMA.
Ryu, however, is less interested in chasing Olympic gold.

“I actually have no interest in the Olympics, so I don’t want to be in it. I’d rather fight MMA,” admits Ryu, who in addition to an MMA career, seeks competitive grappling laurels in both ADCC and the Mundials.

Despite differing views on the Olympics, the end-goal remains the same for Ryu and Teppei in that both are striving to become mixed martial artists. An avid MMA fan who watches fights on both sides of the Pacific, Ryu wants to someday debut in Dream.

When asked about fighting in the states however, Ryu admits, “Well, I don’t want to debut in the UFC, but I want to fight there eventually, after I fight in Dream.”

Teppei, on the other hand, has eyes only for the cage, and is eager to one day fight in the UFC.

“I like the UFC. [The cage] is more real and exciting than a regular ring. The ring is maybe better for an audience, but seeing a fight in a cage makes it feel contained and enclosed,” he says.
<h2>Fight Finder</h2>
Sponsored by