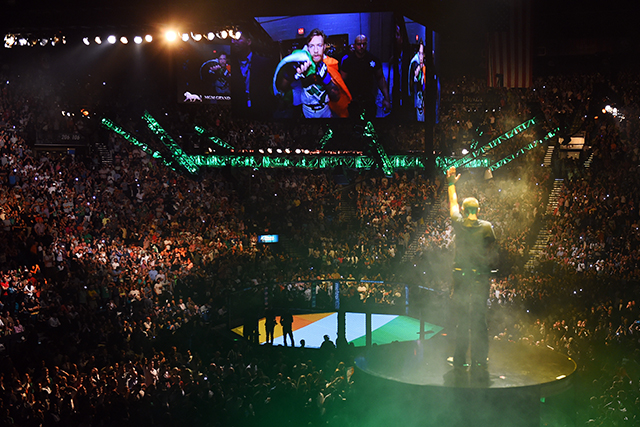 
With the New Year upon us, we at Sherdog.com wanted to reintroduce ourselves to all of you. In this Q&A piece, the Sherdog staff weighed in on five questions about themselves and their histories with the great sport of MMA. Joining us is the entire editorial staff, as well as our excellent contributors from all around the globe. These talented writers and fans of the sport gave us each a little peek behind the curtain.

1) What would you choose for your walkout song if you were a professional fighter?


Jordan Breen: “I Can Do No Wrong” by Pigface, “Order of Death” by Public Image Ltd., or “Glaciers of Ice” by Raekwon, Masta Killa and Ghostface Killah.

Jason Burgos: This may be the toughest question of all! I have so many possible choices in my mind, but if I had to narrow it down, it is a three way tie between Beastie Boys – “So What'cha Want,” AC/DC – “Shoot to Thrill,” and Run the Jewels – “Legend Has It.”

Edward Carbajal: DMX’s “Intro” from “It’s Dark and Hell is Hot,” it was a very popular walkout song back in the heyday of MMA before The Ultimate Fighter. Brian Ortega used DMX up until he fought Holloway. Something to think about Ortega...

Jordan Colbert: If I was going to pick a current song, it would be Travis Scott’s “Sicko Mode.” If we’re talking all-time, then I’d go with “Welcome to Jamrock” by Damien Marley.

Tristen Critchfield: “Headup” by the Deftones. Over the years, there have been quite a few songs I’ve considered — Pantera’s “5 Minutes Alone,” for example, seems especially appropriate — but “Headup” was my initial pick when I first started contemplating potential walkout songs years ago, so I’ll stick with it.

Jacob Debets: “Glory” by Dermot Kennedy. Paul Craig came out to it in his bout with Jim Crute to this at UFC Fight Night 142 and my whole body flooded with adrenaline straight away. It’s now a permanent fixture on my running playlist.

Ben Duffy: As luck would have it, I’ve been building a “walkout tracks” Spotify playlist for four years in the hope that someone would ask me this. Here are the first five songs it fed me on shuffle: “Re-ignition” by Bad Brains, “Babylon Fell (Jade Serpent)” by Celtic Frost; “Int’l Players Anthem” by UGK feat. OutKast; “Let’s Get it On” by Marvin Gaye; and “Lucretia My Reflection” by Sisters of Mercy.

Tom Feely: "B.O.B. (Bombs Over Baghdad)" is probably the correct pick, but having thought over this question way too many times, I keep coming back to "Love Shack" by the B-52's. Obviously. Get weird. Mental warfare.

Tudor Leonte: I would choose to walk out on the notes of “Kings Never Die” by Eminem, “Nightrain” by Guns n’ Roses or “The Ecstasy of Gold” by Ennio Morricone.

Adam Martin: I had a Muay Thai smoker back in 2014 and I chose to walk out to "Atlas Air" by Massive Attack. That smoker taught me I have no business being inside a cage or even a ring ever again, but if I ever did compete in MMA I would absolutely use that as my walkout song once again!

Jay Pettry: I would be one of those fighters that changed his walkout song every appearance, so I’d have to start strong and keep it going. No Eminem, and no “Thunderstruck,” for obvious reasons. My debut on the big stage would have to be Electric Six’s “It’s Showtime.” From there, I’d take it to greater heights, with “Danger Zone” by Kenny Loggins -- especially since K-Log is undefeated as a walkout artist in the UFC on my count. For a third choice, it’d be hard not to hit the “Blue Monday” cover by 90s industrial rockers Orgy. Too many great choices, too few fights, unless I competed in kickboxing and could pick a new song every time.

Mike Sloan: Ugh… There are so many songs that I could choose as my walkout song. However, I’d probably lean “Deggial” by Therion. Check it out. It’s got such a unique sound and rhythm to it, plus 99.9% of any fans watching the fight will have never heard it before. It’s a beautifully dark, yet beautiful song that can enhance literally any mood.

Eric Stinton: As much as I’d like to say something like “Bring da Ruckus” by Wu-Tang or any number of DMX songs, I’d probably take a page out of Homer Simpson’s book and walk out to “Why Can’t We Be Friends?” by War. I’d like to add, though, that I’m not above pandering to hometown crowds with songs by local artists.

Anthony Walker: If you’ve heard any of my appearances on Sherdog Radio Network or knew me for five minutes, you’d know I’m a huge hip hop head. So it may come as a surprise that my walk out song would be the total opposite. While tracks like “Turn It Up” from Papoose, Capone-N-Noreaga’s “Bang Bang” or Dead Prez’s “I’m a African” would make a great way to make the sexiest debut in MMA history, it’s too typical. Almost everybody walks to hip hop and hard rock. I’ll pick Jackie Wilson’s “Higher and Higher.” It’s upbeat, it’s fun, and it’s unexpected. Plus it brings back memories of watching Ghostbusters II as a kid. What’s not to love?

Kevin Wilson: I’m 50/50 on funny vs. serious walkout songs so my two choices would have to be “Flava in your Ear” by Craig Mack or The Price is Right theme song. About 5 years ago I went to a small event in Oklahoma and some 0-4 fighter walked out to the Price is Right song, and I thought it was the funniest thing ever.

Next Page » Trip Down Memory Lane