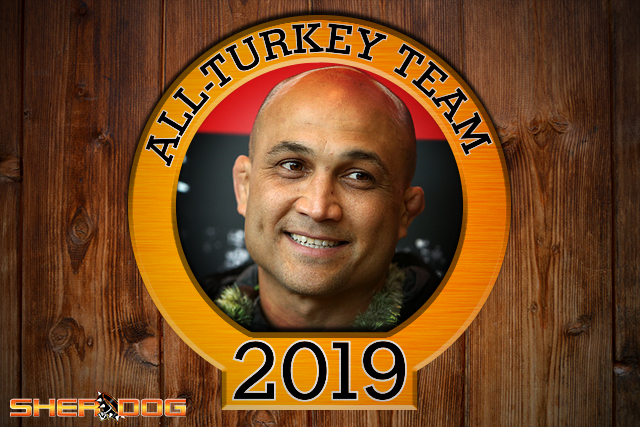 
’Tis that time of year again, folks. While most Americans are sitting around stuffing their faces with turkey, dressing and mashed potatoes and mellowing out to a tryptophan overdose, the staff at Sherdog.com has compiled its All-Turkey Team for 2019. In the past, mixed martial arts has provided us with quite a few questionable characters, and this year has been no exception. The latest group of offenders -- or members -- delivered what might have been the most eclectic rap sheet yet.


Ultimate Fighting Championship legend and hall of famer B.J. Penn on Sept. 26 was released by the promotion. This put an end to a whirlwind year that saw him fight more times outside of the cage than within its eight walls. Inside the Octagon, fans saw “The Prodigy” drop a one-sided decision to fellow elder statesman Clay Guida at UFC 237 in May. One disappointing loss does an All-Turkey Team member does not make, so we look to his extracurricular activities to tell a far more troubling tale.

His release spelled the end to a career with the promotion that began in 2001, when he made his debut at UFC 31 and finished Joey Gilbert in the opening round. Fighting for the lightweight strap in 2002 for the first time, Penn dropped a contentious decision to Jens Pulver -- a man who is quite worthy of entry into the hall of fame. He went on to win welterweight gold prior to capturing the belt at 155 pounds, finishing Matt Hughes in the first round in his welterweight debut. Put simply, Penn was one of the original anywhere-anytime fighters who would take a fight in practically any weight class -- many point to his heavyweight bout against Lyoto Machida in 2005 -- and would generally put forward at least a respectable showing. Those respectable showings stopped almost 10 years ago, and 2019 has arguably been his worst campaign yet.

With Penn’s last victory coming in a 2010 rubber match over the aforementioned Hughes, there exists one if not two generations of MMA fans that have never seen Penn record a win. Penn’s legend as “The Prodigy” has turned into something more akin to “The Prodidy” with his performances this decade, but his story is far darker outside of competition. With the sport in its infancy, we simply do not know the long-term impact of repeated concussive blows to the head. It would be irresponsible to simply write off some of his conduct as a result of years of head trauma, but across his 32-fight career he has absorbed 1,328 significant strikes with four TKO stoppages along the way.

Allegations from his partner, Shealen Uaiwa, in a restraining order filed against Penn in April painted a grim picture. She alleged that during the 10 years they were together, he subjected her to verbal, physical and sexual abuse. Additionally, she claimed that Penn has battled drug addictions since he was a teenager and described how, on a bender, he inadvertently “got cocaine on [her] oldest daughter.” The restraining order was granted and will remain in effect until October 2021, although he is allowed to have supervised visits of their children.

The news did not get better for Penn, as he appeared to take the court order hard, starring in battle for the ages against a strip club doorman, taking his opponent down and embracing the grind all over the bouncer. This would not spell the end to his bar fight saga, as it was more of the same in August but with a dramatically different result.

Penn bit off more than he could chew against a shirtless man with camouflage shorts and took him down inside the bar, only to get stood up and relocated outdoors. After restarting the fight in the parking lot, Penn stuffed a single-leg takedown but ate a flush left hand on the chin. The punch landed cleaner than any of the 245 strikes that Frankie Edgar put on him through the years, and the back of the Hawaiian’s head slapped the pavement like Rocky Balboa punching a slab of meat. The fight was over, and Penn suffered the first clean knockout loss of his career in an upset to the level of Matt Serra over Georges St. Pierre. The video was so alarming that even UFC President Dana White claimed enough was enough and pulled the plug on the much-maligned fighter.

This proclamation was not the first time in the calendar year that White declared Penn was done: After the Hawaiian’s loss to Guida, the UFC boss stated that the promotion would not give him another fight. He reversed that call the following month, but this time stuck to his laurels and bid adieu to “The Prodigy” once and for all.

A fighter once viewed as an inspiration and an all-time great to fans has fallen far, thanks in part to sticking around a sport far beyond his expiration date. This says nothing of his increasingly erratic behavior outside of the cage. When a beloved fighter allegedly threatens a neighbor with a machete and then goes on to pull some of the stunts he is reported to have pulled, it hurts not his legacy but the sport itself. It is quite telling that the former lightweight and welterweight king has not yet been signed by any other organization following his release. We hope Penn manages to get the help he needs to sort through this, but for now, the turkey label certainly fits.