ANAHEIM, Calif. -- Straight punches. That was the simple plan that Andrei Arlovski and his camp conceived to tackle the world’s No. 1 heavyweight Fedor Emelianenko at Affliction M-1 Global “Day of Reckoning” on Saturday.

The plan seemed to work for the first three minutes, as the 29-year-old Belarusian clipped the vaunted heavyweight with his first punch and jeopardized Emelianenko’s balance. Arlovski kept a steady distance and peppered Emelianenko with punches and low kicks, then later bullied his target into the opposite corner with a front push kick.

Then Arlovski got flashy.

It is one of those dynamic finishes that must be seen to be believed. Just as the 6-foot-4 fighter projected himself into the air for a flying knee, Emelianenko reached for the sky with a blistering overhead right that tagged his opponent’s chin. Arlovski’s body caved mid-air before he plummeted face-first into the canvas at 3:14.

“At the end of the first round, I tried to do something flashy and I paid for this,” said Arlovski at the post-fight press conference. “Every single jab or right hand [I threw], I thought that I hurt him. It was really effective for me. I don’t know why I change[d] my plan and did [the] flying knee.”

Arlovski came closer than most.

Still, many agreed that Arlovski challenged Emelianenko in the early going, and that the nearly undefeated Emelianenko was well on his way to dropping the first round.

“He had a slow start,” Emelianenko’s manager Vadim Finkelchtein told Sherdog.com minutes after the fight’s conclusion. “My heart was racing.”

Josh Barnett, victorious in the night’s co-featured bout and next in line to face Emelianenko, was also on the edge of his seat.

“[Emelianenko] was making me a little nervous tonight,” said Barnett. ”I was sitting there going, ‘Keep your hands up and move your head like this.’” 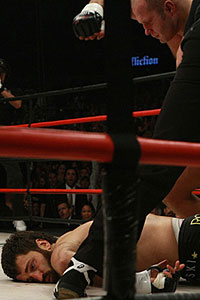 Dave Mandel/Sherdog.com
A picture is worth
a thousand words.
Emelianenko was the only one who wasn’t concerned about his chances. At the post-fight press conference, Emelianenko stoically shook off claims that he may have been compromised by Arlovski at any point.

“As far as any punches that Andrei landed, I think all of them were just glancing blows and thy really didn’t hit me on the button and I didn’t feel them too much,” said Emelianenko through interpreter Steven Bash.

Though Emelianenko commended Arlovski’s speed and skill, he said he never felt threatened by it.

“Just based on feeling myself in the ring, I felt it was an even fight up to the point when I knocked him out,” said Emelianenko. “When he began his attack, he would open up a little bit. I had a feeling that he was going to make a mistake and I was just waiting to capitalize.”

The right hand, which created a 180-degree arch through the air, was instinctual, he said.

“There’s certain techniques that I practiced and worked on and certain scenarios and this is one of the scenarios that I anticipated,” said Emelianenko. “When that scenario came up, I knew the right thing to do was to go with the right.”

Josh Barnett graduated to the head of the class Saturday with his dominant victory over Dutchman Gilbert Yvel, and became the next candidate elected to face Emelianenko in the process.

Barnett, who mounted Yvel and punished him with punches until the striker quit in the third round, befriended the passive Russian in Japan when both of them competed for the now-defunct Pride Fighting Championships. A matchup between the two accomplished heavyweights had been looming for years in Japan, but it appears Affliction will get the honors.

Affliction Vice-President Tom Atencio confirmed initial plans to bring Emelianenko and Barnett together next, but stopped short of a time frame and venue.

“We would fight each other, I’m sure of it, because we’re professionals,” said Barnett. “If it can happen, than it’ll happen. We’re just both out there trying to be the best fighters we can be.”

Apologetic if his three-round tilt with Yvel didn’t live up to expectation, Barnett undoubtedly had other things on his mind. His boxing trainer, Oscar Munez, was involved in a serious car accident on Saturday and is clinging to life in an intensive care unit.