It's one of the most powerful and provocative images of the past century: The XIX Olympiad. October 16, 1968. Mexico City. Tommie Smith and John Carlos. The black glove. Black power.

Despite the symbol's cultural resonance, if you're part of the MMA cognoscenti, "one glove" means something much different to you: UFC 1. November 12, 1993. Denver. Art Jimmerson. The boxing glove. Ridicule.

"It's funny looking back, I just never knew," says Jimmerson, now 45 years old and retired from ring and cage. "But I said, 'No problem,' because it was only going to take me one punch."

Three decades before lacing up his one glove and banking on one punch, Arthur Lee Jimmerson Jr. was a shock-headed youth raised in St. Louis, his childhood coinciding with the cultural crumbling of the city. By the time he had reached grade school, the city's culturally rich Gaslight Square -- which played host to the likes of Jack Kerouac, Alan Ginsberg, Lenny Bruce, Miles Davis and Woody Allen -- had become victim to urban decay, beginning its uneasy alteration from a cultural capital to a perennial contender for "America's most dangerous city."

"I got picked on a lot in grade school basically," says Jimmerson. "There was one guy who always bullied me, so there was a point where a friend of ours in the neighborhood who took us to the boxing gym and I went. The rest is history."

Jimmerson become part of St. Louis' next-gen boxers looking to follow in the footsteps of Olympic gold medalist and world champion brothers Leon and Michael Spinks. After winning the National Golden Gloves as a middleweight in 1983, Jimmerson turned pro in 1985. Success was hard to come by, and he tallied only a 9-2 mark through his first 11 bouts. However, in July 1988, Jimmerson was selected as a tune-up opponent for regionally popular light heavyweight action fighter Lenny LaPaglia. Jimmerson, then known by his long-discarded nickname "Zorro,” brutally bashed LaPaglia in a stirring six-round upset, giving his career a shot in the arm. 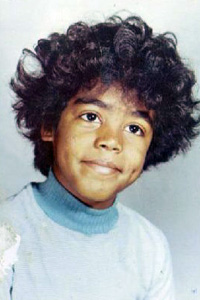 
"[UFC 1] doesn't really bother me because I know who I am as a fighter," says Jimmerson. While Jimmerson often sounds as though he's talking about another lifetime when he speaks of his boxing career, the LaPaglia bout remains a clear touchstone for him.

"If you go on YouTube, and see me fight LaPaglia, that shows the real me," he assures.

He wouldn't go on to become a world champion, like St. Louis contemporaries Eddie Cook, Ed Hopson and Carl Daniels. However, Jimmerson became a solid journeyman, putting together 15 straight victories in the lead-up to UFC 1, and was in the running for a considerable payday as an opponent for an aging legend in Thomas "Hitman" Hearns.

While Jimmerson was eyeing a crack at a hall of famer, Rorion Gracie and Art Davie were looking for willing participants in their grand infomercial for Gracie jiu-jitsu. To sell the UFC, it would require the Bloodsport-esque style-versus-style hook, and to validate the strength of jiu-jitsu, there certainly needed to be a representative of the sweet science.

"Earnest Hart, a good friend of mine from St. Louis, came to me about the UFC," he tells. "I was kind of in and out about it because I really didn't know anything about mixed martial arts."

Jimmerson’s participation didn’t come without outside protest either.

"I had a lot of lawyers who were my managers, they said if this was going to hurt my boxing career, I should pull out,” says Jimmerson. “So, I did threaten to pull out of it and they threatened to sue because I had verbally committed. They ended up taking care of it; they had lawyers and insurance so if anything happened to me they would have been able to cover it."

When broached about how much he was paid for UFC 1, Jimmerson bobs and weaves conversationally. Despite having stated he made $20,000 in previous interviews, nearly half the tournament prize of $50,000, he will offer no further substantiation.

Jimmerson trained with his friend Hart, a former PKA kickboxing champion, to prepare. Jimmerson had done a boxing-versus-karate exhibition against American kickboxing star and eventual UFC commentator Don "The Dragon" Wilson in Florida, and so while he wasn't eager to get kicked in the legs again, he didn't feel he would be caught off guard in the cage.

"I won't say I was young and dumb, it's that I'm always up for a challenge. I don't want to be perceived as a punk,” he says. “So, when they offered me the fight I was like, 'This is going to be a piece of cake. I know how hard I can hit, so what can a guy do to me?' But he was a whole different level." 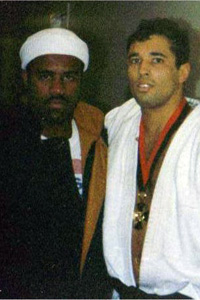 Photo Courtesy: Art Jimmerson
Jimmerson has the utmost
respect for Royce Gracie.
Like virtually everyone, sans the vale tudo intelligentsia and event organizers, Jimmerson didn't think much of Royce Gracie. How would a twiggy grappler in his pajamas be able to cope with a legitimate boxer with nearly 20 pounds on him? If nothing else, Jimmerson expected he would be going to the semifinals.

"I'd never heard of Royce Gracie. I didn't know who he was as a fighter," Jimmerson recalls.

"He was really cautious, but when he started kicking the leg, that's what fried me," he continues. "I forgot where I was at. I was trying to use a lot of lateral movement, then he tricked me by faking up and shot at my legs. Once he got at my legs, I was trying to figure out how to get out of this hold. I couldn't believe how he was holding me down. I tried to move, but I couldn't."

It was easy operating for Gracie. Once he achieved the mount, Jimmerson clung to Gracie's torso, hoping to divine an idea to escape. Instead, the now-infamous boxing glove on his left hand impeded any defense he may have been able to offer. Gracie simply paralyzed him under his mount, and forced Jimmerson to submit, 2:18 into the bout, without even throwing a punch.

"Going into the tournament, I was told he was an easy fighter and he doesn't really punch that hard, but they never really told me he was a world champion of his art," laments Jimmerson. "I had no ground training, I just went in as a fighter, thinking I would knock this guy out with one punch. If I went in there with someone like [fellow striker] Pat Smith I think it would've turned out different on my turf. With Royce, I was fighting a new champion."
« Previous Harold Howard: Where Is He Now? Next Fred Ettish: Where Is He Now? »