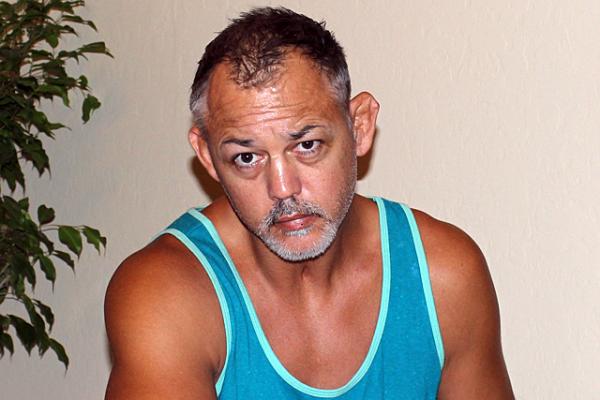 Brian Johnston has made a near-miraculous recovery from a potentially fatal stroke.


Brian Johnston’s American flag trunks were known in the sport before Don Frye and Quinton Jackson immortalized their versions inside the Pride Fighting Championships ring in Japan.

Johnston’s red, white and blue star-spangled spandex and chiseled physique in the Ultimate Fighting Championship’s early days stood out next to the mullet-clad truckers in nondescript sweat pants claiming faux-marital arts styles. Johnson’s victories, however, are not memorable. Johnson posted a 5-5 record, 2-4 inside the Octagon. His .500 career spanned just one year and 15 days. Two of his Octagon losses were to UFC hall of famers Mark Coleman and Ken Shamrock; another came to the rugged Frye.

Today, 16 years after his last professional fight, Johnston serves as a stay-at-home dad to his 3-year-old daughter, Kaiya.

“I’m pretty much just being a dad right now,” he told Sherdog.com. “If I had anymore [kids], I’m pretty sure I’d have a heart attack.”

Known as the “Fury” during his combat sports career, a technical knockout loss to Dan Bobish at UFC 14 in July 1997 ended his professional fighting endeavors. These days, he resides an hour east of Phoenix, removed from the Northern California fighting boom he helped facilitate. It was Johnston’s arrival at the American Kickboxing Academy that brought no-holds-barred fighting to the attention of Javier Mendez. The rest is history at AKA, a top gym in the MMA field since its inception. Johnston claims his slice of the catalyst pie, something Mendez honors with a photograph on the wall declaring the American Kickboxing Academy started with Johnston in the early 1990s.

Touted for Northern California Golden Gloves champion talents in the UFC, Johnston had the trap muscles to go along with a clean-cut fighter’s snarl. The days of being a formative figure at AKA seem a world away now that his involvement in the sport is minimal at best.

“I’ve done some training but nothing on a permanent basis,” he said. “I was training guys for MMA on the B-circuit probably up until about a year ago.”

The most notable happening as a mentor to young fighters in recent years was Johnston’s work with jiu-jitsu world champion Tanner Rice out in Redding, Calif. He maintains a relationship with the Japanese fight scene. A judoka, Johnston spent much time in the Land of the Rising Sun entertaining the masses through professional wrestling. Mixed martial arts and pro wrestling mesh more fluidly there than they do stateside. In Japan, pro wrestlers engage in legitimate grappling and fight training in order to prepare for their shoot-style scripted bouts. That was the allure for Johnston, a physical entertainer who suffered a personal tragedy -- a massive stroke -- while living his dream across the Pacific in August 2001. 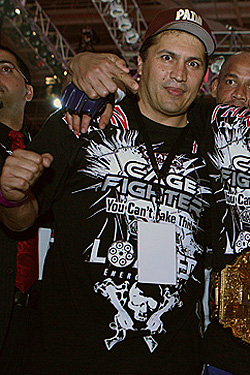 File Photo
Mendez honors the “Fury” at AKA.
“The type of stroke I had, 90 percent of people die within the first year,” Johnston said. “The other 10 percent really cannot do anything on their own. My rehab has turned me from almost paralyzed. I was only able to move my arms for the first four months after the stroke. Now I’m able to beat the odds [and] get mentally tough for my daughter. I’m a hundred times, a million times tougher than I was as a fighter.”

A tear in a blood vessel resulted in a blood clot, cutting off blood flow to his brainstem, which communicates messages from the brain to the spinal cord. The stroke swiftly cut down the life Johnston had been living. Emotional responses became random. Involuntary crying occurred almost every day, even though there was much about which to be somber. The loss of independence, balance and coordination to function on a daily basis was a reality Johnston confronted. Conveyance was the most significant loss of all: facial expressions like smiles and laughs -- any positive or negative acknowledgement -- were seemingly unattainable. Tones of voice to target particular meanings felt impossible to muster for a man who had been a fan of joking around with accents.

Johnston refused a wheelchair, sticking to a crutch until he could regain his ability to walk alone. The toll was mentally exhausting, too. Imagine having to recover the ability to chew.

“The improvement from the original stroke probably stopped about ... probably nine years ago,” Johnston said through his permanently raspy vocal cords, estimating he has been able to regain 60 to 70 percent of his functionality, although his left side has not recovered as well as his right. “I can’t complain. Nothing in the world can be worse than anything like that.”

In the first year of marriage, the bond between Johnston and his wife, Maggie, was strengthened by suffering. They persevered to restore and redefine the quality of life they had envisioned. Even a simple kiss was a challenge. He believed love’s patience could bring him back from the depths of his most significant battle. Johnston met his wife at the American Kickboxing Academy in San Jose, Calif., years before they became involved romantically; they married in the 12 months preceding his stroke. He had retired due to concussion concerns.

“My wife has been excellent,” he said, noting she suffers from a nerve disorder that keeps them both striving for better health while remaining fully committed to their daughter. “I’m the kind of guy that’s going to try anything, no matter what. I fail, [but] if I fail, I keep going. Success is 99 percent failure. She tries to steer me in that right direction. She lets me know if I should do something or not. If she tells me I shouldn’t do something, it’s a legitimate concern.”

The cause of the stroke is something a fighter -- or anyone in contact sports -- could encounter on any given night.

“It was trauma, in layman’s terms,” Johnston said. “I was in Japan, training some guys in Pride. I got hit, rattled my cage a bit. It was a one-in-a-million deal.”

Although Johnston had not fought since 1997, entering 2001, he did not think his fighting career was over. After all, he was the kind of guy who jumped at the idea of “real fighting” when people thought a UFC bout could end in death. The worst that can happen in the UFC now, Johnston says, is one of the fighters walking away with a movie deal. Four years after the last time he stepped in the cage, he was still scrapping regularly, even if he was not in a live-competition environment.

“The timing in MMA and catch wrestling, it wasn’t difficult to get into pro wrestling [and] shoot fighting,” he said. “There was a long tradition, from Karl Gotch on, of some really superior fighters who were doing this long before the Ultimate Fighting Championship. Antonio Inoki and the younger guys that were his students, and of Karl Gotch -- every day, we trained before we wrestled. It wasn’t your typical [pro] wrestling, American-style. It was pretty hardcore.”

Finish Reading » “Luckily, I was able to fight and wrestle. I did what I wanted to do without having to focus on money. I focused on what I wanted. It worked out. I’m glad I did that because I don’t have the opportunity to do those things now.”
« Previous Scott Ferrozzo: Where Is He Now? Next Tom Erikson: Where Is He Now? »