November is a depressing month in Sweden. The streets are filled with commuters wrapped in parkas, scarves, and beanies, fleeing the city, already pitch black in the frigid early evening.


Advertisement
It’s the time of year that Swedes plan vacations to warmer destinations, fighters included. Alexander “The Mauler” Gustafsson, the lone Swede on the current UFC roster, has opted for training near the beaches of San Diego. “The Brazilian Swede” David Bielkheden, trying to fight his way back to the UFC, is in Vancouver, while hot prospect Reza “Mad Dog” Madadi has opted for salsa dancing in the streets of Cuba.

But this Saturday, there’s reason for fight fans to head into town.

On the west coast, in Gothenburg, The Zone Fighting Championships runs its seventh show, “Warriors,” with a host of young Swedish talent vying to become the next Gustafsson, who honed his skills in The Zone FC prior to the UFC. 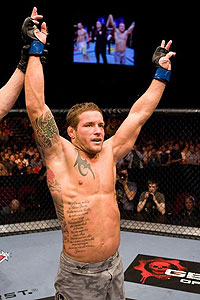 File Photo
David Bielkheden (above)
claimed Sweden’s first win
inside the UFC's Octagon.
Meanwhile, in Stockholm, Rumble of the Kings return to the nation’s capital with its blend of MMA, K-1 and boxing action, featuring an MMA bout between Sweden’s Joakim Engberg and K-1 Max vet Ole Laursen. In the main event, K-1 veteran Jorgen Kruth -- who has been more active in MMA of late -- will meet enduring spectacle Bob Sapp.

Two serious cards, on the same night, in Sweden. Five years ago, few would have thought it possible.

Fighting Foundations in The Nobel Nation

This land of just over nine million people has had a difficult relationship with prizefighting for the last century. Stockholm hosted the 1912 Olympic Games. While the event was celebrated for having participants from five continents for the first time, Sweden refused to allow boxing. In spite of an atmosphere that has done nothing to nurture combat sports athletes, Sweden has had a surprising amount of success.

The greatest example is boxer Ingemar Johansson, who in 1959 defeated Floyd Patterson by knockout to become the world heavyweight champion.

In 2000, Johansson was voted Sweden’s third greatest athlete of the 20th century by the Swedish Sports Academy, behind tennis star BjÃ¶rn Borg and skiing great Ingemar Stenmark. And yet, in 1970 -- just seven years after Johansson hung up his gloves -- pro boxing was banned in Sweden.

Sweden has very little kickboxing culture, and yet, it has produced strong K-1 veterans such as Kruth, Rickard Nordstrand and the late Martin Holm. Likewise, wrestling is not a well-funded or highly-regarded amateur sport, and yet between Mikael Ljungberg and Ara Abrahamian alone, Sweden has brought home Greco-Roman wrestling medals in every Olympiad since 1996.

It’s not just men, either: Saturday’s Rumble of the Kings card will feature 8-0 boxing postergirl Frida Wallberg facing Olivia Gerula for the WBC women’s 130-pound title. Meanwhile, 21-year-old Sofia Mattson has already medaled in the last two FILA World Wrestling Championships -- gold in 2009 and bronze in 2010 -- and will head into the 2012 London Games as the gold medal favorite at 112 pounds.

Forbes has described Sweden’s economic stability as “aided by peace and neutrality for the whole of the 20th century” and notes that Sweden has achieved “an enviable standard of living under a mixed system of high-tech capitalism and extensive welfare benefits.” It’s important to consider when thinking about a future for MMA in the country: it’s no coincidence that with global inequalities, low-maintenance, easy-access sports like soccer, basketball and boxing are so internationally popular.

File Photo
Aziz (above) is a Bellator vet.
However, high-level specialized training in wrestling, jiu-jitsu, boxing, and muay Thai require much more than just a ball and a goal. Not only do Swedes have the money to train, and ergo, compete, but they’re incentivized to do so: perks such as reimbursements for physical activities geared towards keeping the workforce healthy -- which are paid for by private employers -- offer greater potential for Swedes to put on gis and four-ounce gloves.

Just as the U.S. saw in the mid-to-late 1990’s, Sweden’s top combat athletes are beginning to gravitate toward the sport. The aforementioned Kruth has leapt from kickboxing to MMA. Two-time Olympic wrestler Sami Aziz has already fought for Bodog and Bellator, while another two-time Olympic wrestler, Eddy Bengtsson, has also given MMA a whirl.

The Fight to Fight

August Wallen was at the forefront in November 2006, when proposed legislation in Sweden sought to modify the existing ban on professional boxing to include a ban on MMA.

As a fighter, Wallen has fought the likes of Yuki Kondo, Vernon “Tiger” White and Elvis Sinosic. He will take to the cage Saturday to fight for The Zone FC middleweight title against Chris Greig in the evening’s main event. However, his greatest MMA achievements are likely political, as he was a driving force in amending the legislation to save MMA in Sweden.

“We were able to make 116 changes to the proposed ban,” Wallen says proudly. This legislation laid the foundation for the Svenska MMA Forbundet (Swedish MMA Federation) to form in 2007, the oversight of several successful MMA sanctioned events beginning in 2008.

MMA became a greater part of national debate in 2009. Early in the year, the SMMAF was accepted into the Association of Swedish Budo and Martial Arts Federation. Upon admittance, MMA became a “national sport,” and its approved clubs therefore became subsidized in part by taxpayer money.

Eight professors from the Karolinska Institute in Stockholm responded to the decision in one of Sweden’s largest newspapers, the Dagens Nyheter (DN). It called the RiksidrottsfÃ¶rbundets’ (National Sports Federation) decision to let MMA become a nationally-recognized sport “not possible to defend.”

In November, MMA was put on trial via Swedish’s equivalent of “60 Minutes” on Sweden Television’s (SVT) “Uppdrag granskning” (literally “Mission: Investigation”) where the nation’s hot-button topics are put on display.

“It is really stupid,” commented Martin Ingvar, one of the eight professors who wrote to DN, and a distinguished neuroscientist with the Karolinska Institute. Ignvar has emerged as the foremost public critic of professional boxing and martial arts in Sweden, calling blows to the head in prizefighting “a production of brain damage for commercial purposes.”

While the episode featured many of the UFC’s most brutal KO’s for shock value, it also followed the charismatic and entertaining Reza Madadi and the clean-cut and hard-working Tor Troeng, giving Sweden a proper introduction to MMA’s athletes.

“
You can’t ban MMA
based on the
argument of death
in the sport,
unless you ban
horse riding first.

“Sportifying mixed martial arts in Sweden has been critical to success,” explains Wallen, who was also featured on “Uppdrag granskning” and frequently finds himself the public counterpoint to Ingvar.

Wallen is perfectly suited to play the “politician” role for Sweden’s MMA supporters; his defense in debate is as sound as if he were in the cage. With Dana White-esque confidence, Wallen boasts of Swedish MMA’s safety, noting that there have been no deaths in MMA in Sweden, while amateur boxing has had one, and horse riding has had 160.

“You can’t ban MMA based on the argument of death in the sport, unless you ban horse riding first,” declares Wallen, rich with rhetoric. Ingvar himself has remarked on Wallen’s craftiness in the political realm, calling his adversary “very clever.”

While SMMAF has not fully adopted unified rules -- elbows and foot stomps are still illegal, for instance -- it’s a step that seems imminent if not immediate given the popular support MMA has attracted.
Related Articles
Latest News
+ VIEW MORE