It would be the biggest fight in mixed martial arts history, if it can be made. Given the considerable stakes involved between the UFC and Fedor Emelianenko, that’s a big if.

Brock Lesnar’s decimation of Frank Mir on July 11 demonstrated that the UFC heavyweight champion’s rising profile -- and rapidly improving skills -- make him and Emelianenko a dream match that could catapult the sport to the next level. That’s if someone blinks and both parties agree to a deal.

As previously noted, the heavyweight championship of the world had been the province of boxing for more than a century, until 2003, when Lennox Lewis retired and an undisputed king failed to materialize. With the longest gap in title lineage in the history of a championship that started back with John L. Sullivan (boxing managed to screw up even this), sports fans might soon answer Brock or Fedor when asked who is the baddest man on the planet.

That’s a huge coup, and that -- among millions of other reasons, most of them green -- is why Lesnar-Emelianenko hits a bullseye on multiple targets. It would bring in millions of new viewers, garner insane media attention, introduce Emelianenko to a mainstream audience and allow Bob Arum to continue to manufacture excuses as to why boxing has not been surpassed.

Sherdog.com checked in with preeminent oddsmaker Joey Odessa, fighters and MMA game insiders for their thoughts on Lesnar vs. Emelianenko, as well as whether or not they think it will actually happen.

Odessa recently opened the first wagering line on the bout for Sportsbook.com, tabbing Emelianenko as a -240 favorite, with Lesnar a +190 underdog. Those are roughly 2.5-to-1 odds. For players to wager those numbers, the fight would have to take place by October 2010.

“I think Fedor wins the fight and is underpriced at -240, but given Lesnar’s the more recognizable of the two, the bout may draw more action on Brock closer to fight time. People often don’t understand that a good wagering line is one that generates two-way action,” Odessa said. “Everyone loves to see the underdogs win. What’s crazy about this bout is Lesnar is going in as the underdog, and I’d say the majority of the general public thinks he opens his mouth to change feet, evident by his pre- and post-fight disrespect of Frank Mir and the UFC sponsors.” 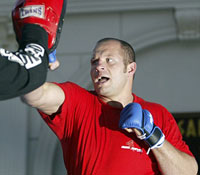 Jeff Sherwood/Sherdog.com
Boxing's endless slide has opened new
doors for MMA to capture the public.
Lesnar’s post-fight interview at UFC 100, during which he disrespected a UFC beer sponsor and generally played a professional wrestling heel, elicited strong reactions from fans, writers and UFC President Dana White; Lesnar was seen conspicuously displaying the UFC beer sponsor at his post-fight press conference apology. This still works in his favor, Odessa said. It’s the same dynamic Cassius Clay grasped going into his shocking 1964 upset of Sonny Liston; people will pay to see a loudmouth get his comeuppance.

“Like many athletes, people will pay to see him get beat and bet against him with their hearts. It created a small dilemma when setting the opening line. Fedor hasn’t got near the USA exposure that Brock has gotten with his accomplished NCAA and then professional wrestling background,” Odessa said. “And Fedor fights about once a year, with all but his last two fights outside the United States. You end up with a wagering line that I think is a little low but accurate. The majority of the casual fans are likely to wager on Brock Lesnar, but I believe Emelianenko belongs more around the -400 (4-to-1) favorite range.”

Odessa agrees boxing’s endless slide downward has created an opportunity for mixed martial arts to capture public interest, particularly the common perception of the “heavyweight champ.” Having long worked as an oddsmaker for boxing, as well, Odessa has been a close watcher of both sports and has seen firsthand how public interest has shifted from the sweet science to MMA.

“The fight fan has always been enamored by the heavyweights, no matter how shallow the talent pool is,” Odessa said. “If Brock and Fedor do meet, it would be wise for the promoters, preferably the UFC, to capitalize on the USA vs. Russia rivalry. The United States has nothing in the heavyweight boxing division, where six of the top 10 in the division are boxers of post-Soviet states. The potential fight between Lesnar and Emelianenko should be a global extravaganza. There is no questioning the accomplishments and abilities each fighter, and the pre-fight lead-up to an eventual battle between the two would capture the interest, worldwide, of even the most casual fight fan. It’s what MMA may need to silence its critics and acknowledge that it is the most exciting and challenging combat sport on the planet.”

Previous attempts to sign Emelianenko ran into a hornet’s nest of problems. The Russian’s management claimed the UFC was unreasonable, wanting him to sign over his likeness and agree to a long-term contract with a champion’s clause that made it difficult if not impossible to leave the organization. White blasted Vadim Finklestein, Emelianenko’s manager, for allegedly demanding the UFC sign other Red Devil Sport Club fighters, and insisted Emelianenko not compete in his beloved sambo tournaments.

What has changed is that the prospect of bout and attendant public demand has only exploded since Lesnar’s wins over Mir and Randy Couture. An impressive win by Emelianenko at Affliction “Trilogy” on Aug. 1 would leave him in a unique position, with an expired Affliction contract and more in demand than ever.

The UFC can continue to match Lesnar with other heavyweights, but this match is MMA’s equivalent to Riddick Bowe-Lennox Lewis in the early 1990s -- if it does not happen, the sport will have missed a chance to strike while the iron was white-hot. In 1993, when Bowe-Lewis was the perfect booster shot boxing needed, Bowe’s camp ditched the WBC belt. What’s more, Bowe built a kitchen in his mansion and proceeded to add 50-plus pounds between fights, prior to two meaningless defenses, and lost the title to Evander Holyfield. The projected $100 million dollar super fight was not to be.