His proponents will point out that the Croatian striker was the only top-level kickboxer to successfully make the transition from K-1 into MMA. They will list his Pride Open Weight Grand Prix title win and remind you that Cro Cop was the top “gaijin” fighter in Japan from 2005 to 2006.

Despite the Grand Prix victory, naysayers will say Cro Cop still carries the stigma of being the sport’s eternal runner-up. At no point was Filipovic considered the undisputed No. 1 fighter in his weight class and after losses to Antonio Rodrigo Nogueira and Fedor Emelianenko, he cemented his spot as the third best heavyweight of his generation. They will also object that Cro Cop was handed many inexperienced opponents during his stint in Japan.

Something nobody can take away from Filipovic, however, is the fact that he gave Japanese fight fans an unbelievable amount of exciting and emotional moments. Heading into his fight against Mustapha al Turk this Saturday at UFC 99 in Cologne, Germany, Sherdog.com has compiled a list of Cro Cop’s best and worst moments throughout his nine-year MMA career.

Olympic judo gold medalist Hidehiko Yoshida was the main domestic draw for Pride Fighting Championships at the same time that Cro Cop was reaching his performance peak in 2005 and 2006. Consequently, it was inevitable these two were bound to eventually clash. Although Yoshida had already been beaten by the much heavier Olympic wrestler Rulon Gardner and iconic slugger Wanderlei Silva (twice), neither man had managed to stop the 35-year-old judoka.

The first man to find a chink in Yoshida’s armor was Filipovic. He wisely avoided Yoshida’s ground game altogether and chopped away at the judo stylist’s legs. Fearing Cro Cop’s infallible left high kick, Yoshida absorbed a large amount of punishment until he fractured his right leg and had to forfeit the fight. Cro Cop advanced to the semifinals and became the first fighter to stop the durable judoka. 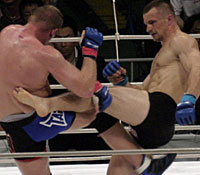 Even though their trilogy isn’t as famous as Sakuraba-Silva or Nogueira-Emelianenko, the three clashes between Filipovic and former UFC champion and King of Pancrase Josh Barnett were top attractions. While the first and third encounters ended in controversial fashion –- Barnett injured his shoulder shortly into the first bout and he received a thumb to the eye five minutes into their third fight –- the second meeting had both men fighting at eye level.

A mobile Cro Cop fired off perfect counter-punching, and his wrestling especially sharp thanks to extensive training with three-time Brazilian champion Rodrigo Artilherio. Not only could Barnett not take him down, Filipovic managed to mount the significantly larger American several times. An aggressive Filipovic late in the fight, paired with an inadvertent cut below the eye of Barnett, sealed the deal for the Croatian on the judges’ cards.

September 10, 2006 was an intergalactic date. Not only did two of Japan’s biggest foreign MMA stars finally meet each other in the ring, it was also Cro Cop’s 32nd birthday. It appeared that the stars would align to finally rid the Croatian of the moniker “King without a Crown.” Although the “Axe Murderer” had already lost a couple of key fights prior to his clash with Cro Cop, he came in that night fresh off a total destruction of iron-headed Japanese wrestler Kazuyuki Fujita.

Fans at the sold-out Saitama Super Arena saw a difference in class when it came to striking ability. While Silva was brawling as aggressively as ever, Cro Cop was firing off powerful shots with laser precision. A knockdown was followed by ground-and-pound, which bloodied the Brazilian badly. After a couple of body kicks, Silva’s ribcage had turned blue and he lowered his guard to protect the area. It was the Croatian’s patented left high kick that eventually knocked Silva out in brutal fashion.

With his third win over Barnett later that night, Cro Cop went on to win the Pride Open Weight Grand Prix –- the biggest prize he would ever take in his five-year stint for Pride.