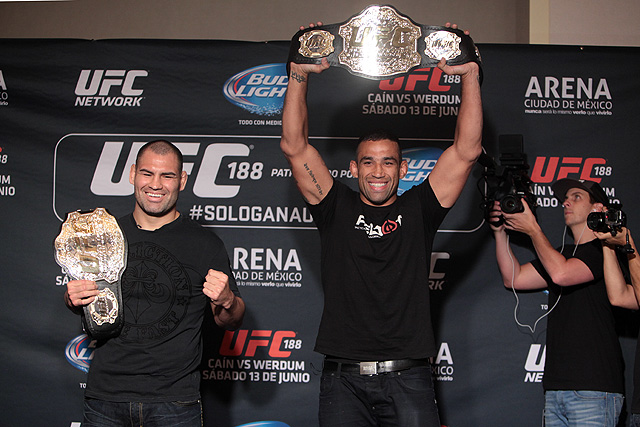 
Fabricio Werdum thrives as the underdog.

Werdum will once again fill the role when he meets Cain Velasquez for the undisputed Ultimate Fighting Championship heavyweight crown in the UFC 188 main event on Saturday at Mexico City Arena in Mexico City. Beating long odds are nothing new for the two-time Abu Dhabi Combat Club Submission Wrestling World Championships gold medalist; he faced them ahead of his historic submission victory over the great Fedor Emelianenko in June 2010, when he handed the Russian legend his first defeat in nearly a decade.

The road to Werdum’s unification bout with Velasquez can be traced to a lower-middle-class upbringing in Rio Grande do Sul, Brazil, where life was made up of difficult challenges, a lot of hard work and some good luck. The third child born to parents Verlau and Celia Maria, Werdum grew up in Porto Alegre in southern Brazil. Together with brother Felipe and sister Fabiana, he enjoyed a nice standard of living but always had to work to have his own money.

That necessary work ethic had him working in a shoe shop in 1998, when he met a girl named Luciana. The chance meeting would forever change his life.

“Her ex-boyfriend, Marcos, was a jiu-jitsu fighter [and a brown belt under Ricardo De La Riva],” Werdum told Sherdog.com. “At the time, I had no idea what jiu-jitsu was. He was always around trying to get her back, and I was getting really upset about that. One day, we had a discussion on the beach, and he invited me to roll.”

Though he had no idea what the man meant, the then 20-year-old Werdum accepted the challenge.

“In a few seconds, he put me in a triangle choke in front of my girlfriend,” Werdum said. “My face was getting purple, and I didn’t know what to do. I didn’t know I should tap out. He released me before I went unconscious. What an embarrassment.”

The experience made an impression. Werdum decided to enroll at the Winner Behring Jiu-Jitsu Academy, where Marcio Corleta -- he was a black belt under Rickson Gracie proteges Silvio and Mauricio Behring -- began his formal training in 1998. Two years later, Werdum was no longer dating Luciana, but thanks to her, he had discovered his real passion; he won his first Brazilian jiu-jitsu world championship in the absolute blue belt division in 2000. Werdum also made peace with the man who introduced him to the triangle choke.

“We turned into friends,” he said. “I met him and thanked him for changing my life, so I’ll never get my revenge.”

Corleta was impressed with Werdum from day one.

“Besides learning fast,” he said, “he had lots of potential.”

By 2002, Werdum was on his way. He captured a pair of gold medals at the Brazilian jiu-jitsu world championships, winning the blue belt absolute and super heavyweight divisions.

With his mother living in Spain, Werdum decided to relocate to Madrid to teach jiu-jitsu at the same academy as his brother, capoeira master Felipe Urso. However, Silvio Behring would not allow him to open an academy of his own because of his rank as a blue belt, so Werdum was forced to find a part-time job.

“My mother had the resources to give us a very good life, but I needed to work to have my own money,” he said. “I did everything you can imagine: painting, building construction, cleaning at night. I used to train in a traditional Japanese jiu-jitsu school and also with the Spanish national judo team in an academy located in the soccer stadium of Atletico de Madrid.”

It was during his training with the national judo team that Werdum’s engaging personality and excellent technique started to come together to open doors.

“The judo teacher of the Olympic team, Mr. Carlos Sotio, liked me very much and offered me the dojo to teach after his judo class,” Werdum said. “Right after the invitation, I won the European Jiu-Jitsu Cup and received my purple belt. I got second place in the purple belt absolute division at the world jiu-jitsu championships, losing to [Ronaldo] ‘Jacare’ [Souza] in the final; and my master finally allowed me to teach.”

Werdum’s first days as a Brazilian jiu-jitsu instructor in Spain did not go as he had hoped.

“Few people in Spain knew jiu-jitsu at that time,” he said. “In the beginning, my only company was the heater. I remember there were times when my brother, who had many students in his capoeira class, would ask another instructor to teach it so I wouldn’t be left alone in my class. He was my only student.”

Werdum returned to Brazil each year to compete in the Mundials and Copa do Mundo. He won world titles as a brown belt and as a black belt. His accomplishments led to more recognition, first in Madrid and later all across Spain.

“Today,” he said, “I have four academies and about 450 students spread all over Spain.” 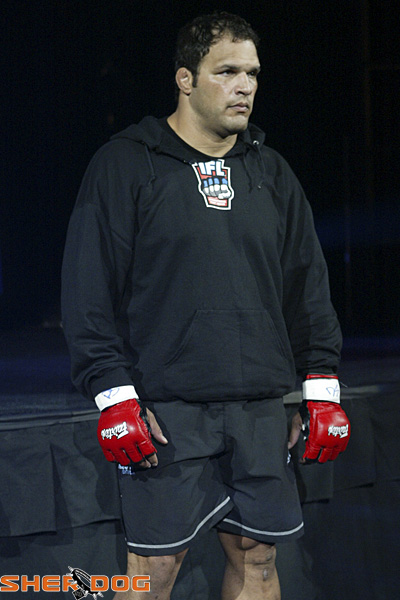 (+ Enlarge) | Photo: Jeff Sherwood/Sherdog.com
Meeting Kerr benefitted Werdum.
After Werdum received his black belt from Sylvio Behring, he decided to go to Los Angles to make his back belt debut in the Pan American Championships. There, another coincidental meeting altered his path once more.

“I met Marcus Vinicius de Lucia, owner of the Beverly Hills Jiu-Jitsu Club,” Werdum said. “We became really good friends, and he invited me to spend a month at his academy training Mark Kerr for his super fight [with Ricardo Arona] at the ADCCs in 2003 in Brazil. Mark Kerr liked me and asked Sheik Tahnoon to put me in the event if someone got hurt. Ricco Rodriguez did not go, so I replaced him. I knew it was the opportunity of my life, so I did my best, getting second place in the over 99-kilogram category and third in absolute. After that, I received many invitations to fight in submission and vale tudo events, and my career exploded. That first push from Kerr was another turning point in my life.”

Upon returning to Spain, Werdum started to draw interest from European MMA promotions. He made his professional debut at Millennium Brawl 7 on June 16, 2002 and submitted Tengiz Tedoradze with a first-round triangle choke.

Werdum returned to the organization three months later and fought to a draw with James Zikic before tapping Kristof Midoux with another triangle choke at a World Absolute Fight Federation event in March 2003. However, he considers his fourth fight against Gabriel Gonzaga under the Jungle Fight banner his true MMA debut.

“This fight was really strange because even though we were both jiu-jitsu black belts we exchanged punches the entire time,” said Werdum, who put away Gonzaga in the third round. “In this fight, I proved to myself that I really was born to compete in vale tudo. ‘Napao’ clearly dominated the first round, but I came back better in the second. I knocked him down in the third and mounted him, and the referee stepped in. What a fight. I was so tired that afterward I kept vomiting for almost two minutes.”

BIRTH OF THE UNDERDOG


His time being labeled as an underdog started five months later at Jungle Fight 2, where he met Ebenezer Fontes Braga, one of the most experienced strikers from the Ruas Vale Tudo camp.

“It was hard to find opponents for Ebenezer in Brazil, and Werdum immediately accepted, even though he was 100 percent the underdog,” said Jungle Fight promoter Wallid Ismail. “At that moment, I knew this kid had a champion’s heart.”

The only chance for Werdum, pundits believed, was to take down Braga. However, the Ruas Vale Tudo fighter stymied his attempts and completely dominated the first round. A knockout appeared imminent, but Werdum shocked onlookers 1:28 into round two.

“He was blocking all of my attempts,” Werdum said. “Then I faked a leg attack and threw a punch to his face, knocking him out. Before the fight, I remember Ebenezer said that God had already chosen the winner; and after the fight, he is such a nice guy that he came to me and said, ‘God chose you. Please, Fabricio, when you have time, go to church and thank him.’ I’ll never forget his words. One week later, I was in Madrid, and, even though I wasn’t too religious, I decided to go to a church and pray, thanking God for everything.”

Finish Reading » “I cannot describe what I felt at that moment,” Werdum said. “In my opinion, Fedor is still the best of all-time. I was the better man that night, but one defeat cannot erase the history of a man who went undefeated for 10 years and beat the best more than once. People cannot forget about Fedor.”