Fred Ettish spent more than his share of time on hell’s doorstep. The product of a broken home, he suffered through persistent taunts from his peers because of his slight build, endured unspeakable mental and physical abuse from his stepfather as a teenager and lost a son, only minutes old, back in 1996.

Toughness was not developed in him so much as it was forced upon him. Life can be a ruthless teacher.

For many longtime mixed martial arts diehards, Ettish will be forever associated with his ill-fated appearance at UFC 2 on March 11, 1994, when he entered the cage on a moment’s notice to fight Johnny Rhodes -- a man physically superior to him in virtually every way imaginable. Three minutes and seven seconds later, after being momentarily blinded and cut by a bare-knuckle punch, Ettish succumbed to a rear-naked choke. He was not afforded the opportunity to return the Octagon to right his wrongs, and his life was never the same.

Now 53, Ettish resides in Kansas City, Mo., where he runs a martial arts gym affiliated with the Miletich Fighting Systems camp. He had the chance to train with MMA pioneer Pat Miletich on several occasions, and the relationship between them strengthened over time. When the MFS founder made known his plans to open a satellite in the Kansas City area, Ettish capitalized on proxy and made use of his connection.

“I’ve known Pat for a number of years,” he said. “I saw him at a few shows and had the chance to go to the Bettendorf, Iowa, facility once a year to train. I found out he was starting a chain of affiliates and planned for one in Kansas City, so I picked up the phone and called him. He asked me if I’d be interested in being involved, and I jumped at the opportunity.”

Ettish has roughly 20 students under his wing at the Damaibushi Martial Arts academy, where he spends some 20 hours a week teaching and 20 more tending to the headaches that come with operating a business. Expansion remains a goal, but Ettish still keeps odd jobs in order to pay the bills and stay afloat in an uncertain economy.

Love, however, not the prospect of teaching martial arts, brought the divorced father to Kansas City from Minnesota.

“A lot of things in my life changed,” Ettish said. “I met a woman who lived down here, and I was commuting back and forth. The relationship was going well. I was actually headed for Key West, but this is as far as I got.”

He married his second wife, Pam, in 2005 after mutual tragedy brought them together.

“As with most things in my life,” Ettish said, “there’s an interesting story behind it.” 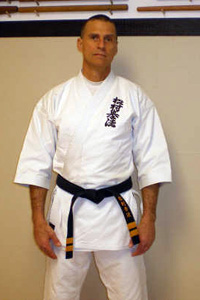 Photo Courtesy: Fred Ettish
Fred Ettish teaches at a Miletich
Fighting Systems affiliate
near Kansas City, Mo.
He enlisted in the United States Marines straight out of high school and made lasting friendships in his four years of service. One of those relationships laid the foundation for future happiness.

“I graduated high school and joined the Marine Corps with her oldest brother,” Ettish said. “She was about four and a half years younger, but I knew her. Her brother died in 2003, and I went to the funeral. I hadn’t seen him since our Marine Corps days. I got re-introduced to Pam there.”

Amid tears and heartache, plans were hatched, unbeknownst to Ettish or his future bride.

Ettish’s childhood was no laughing matter. He was the son of European immigrants who met in Switzerland after World War II. His father, Peter, left the Old Continent in 1952 after surviving forced labor camps in Nazi Germany -- according to Ettish, “his heritage had a lot of Jewish blood in it” -- and pursued the American dream as an electrical engineer. Once Peter had a financial foothold, he sent for his wife, Dorothy, who was already pregnant with their first child, a daughter. Fred Ettish came along a few years later.

“My dad was an incredible man,” Ettish said. “He came from nothing and worked his way up.”

Raised in Norwalk, Conn., a city home to the nation’s largest oyster company, he bounced between his home state and Montana before putting down roots in Minnesota. His mother and father separated when he was 11, and their divorce touched off a downward spiral in his life. Once his mother remarried, a more brutal reality took hold.

He found refuge through an unexpected source. One of his friend’s parents, made aware of what he was up against at home, threw him a lifeline and offered him place to crash, warm meals and the structure he so desperately needed. Another in a string of violent incidents spurred his decision to accept their offer.

“My stepfather burned our house down in a drunken rage the same night he chased us with a loaded rifle and tried to run me over with his truck,” Ettish said. “One of my classmates had told me, ‘If it gets too bad, my parents will let you stay with us.’ I went to school and asked him if the offer still stood. That’s the way it went. They never blinked.”