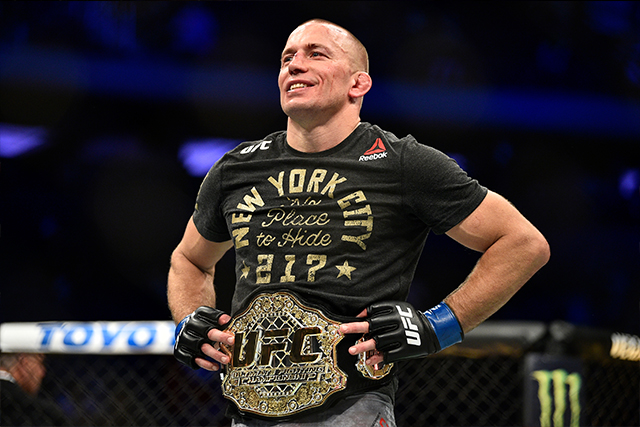 
With the recent retirement announcement of Georges St. Pierre, it only seems appropriate to take a moment to commemorate the achievements and legacy of the fighter regarded by many as the greatest ever.

Of course, retirement announcements in mixed martial arts are a dicey proposition; notably, since Fedor Emelianenko announced in 2012 that he was hanging up the gloves -- resulting in his own Sherdog retrospective -- he has gone 4-2 and competed in the finals of the Bellator MMA heavyweight grand prix barely a month ago. Not bad for a retired fighter.


Advertisement
However, there's something about St. Pierre that makes his announcement just a little more credible. After all, this is a man so careful and considered that he made a point of not calling his 2013-2017 hiatus a retirement. As a fighter who has made so few mistakes or missteps -- in or out of the cage -- he's earned being taken at his word, and thus we present this collection of impressions, memories and analyses of the man from tiny Saint-Isidore, Quebec. He changed the game in more ways than one might realize, generally for the benefit of fighters and the sport as a whole, all while amassing one of the most unimpeachable individual résumés in the history of the sport.


Close Encounters of the GOAT Kind


Tristen Critchfield: I briefly crossed paths with Georges St. Pierre in 2009 while putting together a story on Rashad Evans ahead of his title defense against Lyoto Machida at UFC 98. It was a far different landscape at the old Jackson-Winkeljohn gym -- then more commonly referred to as Jackson’s MMA -- than it is now, and St. Pierre had been in the habit of making the occasional trip from Montreal to Albuquerque ever since linking up with Greg Jackson following his upset loss to Matt Serra in April 2007.

In this instance, GSP was in town to help Evans get ready for Machida and to do some initial game planning for a welterweight title defense against Thiago Alves that summer. That day, St. Pierre sparred with Evans and joked with Keith Jardine about his cameo in the Jason Statham action flick “Crank.”

Without any prior notice, I approached St. Pierre and asked for a couple minutes of his time. “Rush” was just as he appears to be, unfailingly polite and accommodating -- even to someone without an established reputation. Many stars of a similar magnitude might have brushed me off, referring to me their manager for interview clearance. I only spoke to St. Pierre for a couple minutes that day, but it’s an encounter that still stands out. It seems like ages ago.

“It prepares me psychologically to see what’s coming up ahead of me,” St. Pierre said of what would be a one-week visit to the Duke City.

A few years later, St. Pierre was scheduled to defend his title against the Jackson-Winkeljohn-trained Carlos Condit at UFC 154. St. Pierre and Condit had shared training space in the southeast Albuquerque gym in the past, and Jackson excused himself from cornering either fighter that night. It wasn’t the first time such a conflict arose at the renowned gym, and it definitely wouldn’t be the last.

However, it was easy to see Jackson’s connection to St. Pierre and that their bond extended well beyond the confines of the cage.

“He has been the kindest, most loyal human being on the planet,” Jackson said then. “It’s really nice to have a guy like that in your life when not everybody handles everything well throughout the years, and just to watch the class that he has and to watch who he is as a person is really inspiring.”

It seems as though a lot of people agree with Jackson.


Jordan Breen: When I went to Universal Combat Challenge 10 back in June 2002, I would’ve been satisfied whatever went on in the cage that night. I was just excited to finally get to see MMA live for the first time. That said, I was especially jazzed up - - as jazzed up as you can be hanging out in Hull, Quebec - - because I had a feeling the card featured a future, surefire UFC champion. And you know what? I was right.

…And that fighter was Rich Franklin. Hey, I wasn’t wrong.

That night was the second pro fight of Georges St. Pierre. In all honesty, headed into the evening, St. Pierre wasn’t really on my radar as a major prospect; I’d seen his lone pro fight a few months prior in which he exploited his massive size advantage to beat up future bantamweight Ivan Menjivar. I had no real expectations headed into his bout with standout judoka Justin Bruckmann. My interest was piqued almost immediately when St. Pierre, who was hyped up because of his kyokushin karate background, changed levels and hit a flawless blast double-leg takedown. When Bruckmann stood up, his clinch skills had no purchase against GSP, who seemed immovable in the clinch, effortlessly defending Bruckmann’s throw attempts, casually plopping his man back on the mat, hammering away from top control then locking up an armbar. I didn’t know I was looking at a future legend, perhaps even the best fighter in MMA history, but I was convinced I saw something special.

I remember being dumbfounded when the card for TKO 14 was announced a year and a half or so later. Here’s Pete Spratt, fresh off the biggest win of his career in a major upset over previously unbeaten Robbie Lawler and rather than use that leverage to get a bigger fight next time out in the Octagon, he’s going to Victoriaville, Quebec, to get smoked for a couple thousand bucks by a guy the promotion is grooming for the UFC?

Considering his athleticism, well-roundedness and incredible in-cage accomplishments, it seems hard to believe that he wasn’t a sensation out of the gate. He was a +200 underdog in his UFC debut against Karo Parisyan, who was a darling to fans early in his UFC run because of his high amplitude throws and judo prowess. In fact, go back and watch UFC 46 if you really want to enjoy some cognitive dissonance. Color commentator Joe Rogan spends the entire fight blatantly ignoring that St. Pierre is dominating every second, clinging to the idea that Parisyan is suddenly going to use some kind of judo black magic to snatch victory from the jaws of defeat. Then, when the 10-second clapper sounds during the third round, Rogan dejectedly grouses something along of the lines of “Well, I guess St. Pierre is going to win.”

Because he was so dominant for the majority of his career, there is some retroactive reimagining when it comes to St. Pierre. In casual remembrance now, his first fight with Matt Hughes is now chalked up to a learning experience against a perennial pound-for-pound elite, which only served to make him a better fighter in the long run. Now, that statement is true, but neglects how many vocal opponents there were in the MMA fanbase when the UFC announced Hughes-St. Pierre 1, especially in the wake of the promotion’s then-standoff with the always mercurial B.J. Penn. In fact, despite losing, it was on account of how surprisingly effective he was in five minutes with Hughes that many folks suddenly realized, “Hey, this guy is pretty good.” Think you could find one of the many folks who were adamant that Sean Sherk was going to give him a wrasslin’ lesson? Even if you could, they wouldn’t admit it. I’m sure that years from now, people will attempt to paint his clobbering of Michael Bisping as a no-brainer of a squash match from get the get-go.

Also, I thought he was fantastic as Batroc the Leaper in “Captain America: Winter Soldier,” even if he didn’t grow out a soup strainer mustache like the comics. We may not all see eye-to-eye on all things St. Pierre, but I think we can all safely agree “Winter Soldier” is the best Marvel movie, right? Right?

Would it have been nice if he squared off with Anderson Silva when they were both in their primes? Sure. Did he deserve the decision against Johny Hendricks? Nah, probably not. Is strange to consider that perhaps the best fighter in MMA history once got clobbered by Matt Serra? No doubt.

St. Pierre was the whole package as an athlete, emphasis on “athlete.” As GSP rose to superstar status, he was one of the first MMA fighters to really micromanage his public image. For many, especially for fans who came of age during a time where UFC fighters were prized for their accessibility and candor, GSP’s buttoned-up brand and interviews full of sanitized stock answers became an annoying trope, but it comports with his fighting sensibilities. While I think “Rush” gets an unfair rep from some as a “boring” fighter, I think it’s fair to say that his approach, in and out of the cage, was based on conservatism, strategy and execution, never overextending himself or leaving anything to chance. He had a gameplan for everything, right down to the first time he stepped away from the cage when he felt like he was starting to slip, bided his time and got a desperate UFC over the barrel, cashed in and made history.

In a world of Conor McGregors, you’d think that kind of image-conscious sterilization would be an impediment, but it never hurt St. Pierre. He remains one of the most popular fighters ever and one of biggest draws in MMA history. Why? People love a winner and few fighters have ever done it more consistently and thoroughly than GSP.

Continue Reading » Georges is not impressed by your interim title... or his own
Related Articles
Latest News
+ VIEW MORE