“These men are the reason why the UFC has the greatest fighting athletes in the world.”

Those were the words Bruce Buffer uttered before a live audience and the millions who tuned in to Spike TV to watch Forrest Griffin slug it out with Stephan Bonnar at “The Ultimate Fighter 1” Finale on April 9, 2005 at the Cox Pavilion in Las Vegas. Judges saw Griffin edge Bonnar to become the first “ultimate fighter” in a centerpiece for the UFC’s Trojan Horse, as the promotion launched itself into the mainstream and set high expectations for the little reality show that could.

However, eight seasons and 112 prospective UFC fighters later, one cast member -- Junie Allen Browning -- has called into question the show’s sense of drama and direction. Criticisms for a season that featured grown men knowingly and unknowingly ingesting each other’s bodily fluids were placed upon the Kentucky native’s shoulders, along with past infractions.

Season eight remains fresh in the minds of many, even with the next installment of the reality series already in the works. With signature moments like Bonnar-Griffin left to the history books, what do fans and fighters expect from “The Ultimate Fighter,” and how far is too far?

In the summer of 1971, psychologist Phillip Zimbardo assembled a research team and created a prison in the bowels of Stanford University’s psychology department. Its purpose was to answer one question. What happens when you put normal people in an abnormal place?

The flip of a coin split into two a group of healthy, white, intelligent middle-class volunteer males. They were divided and designated as either prison guards or prisoners. Guards were free to maintain the prison, guided only by their judgments of right and wrong. The experiment, originally scheduled to span two weeks, had such drastic pathological affects on men in both groups that it was halted after just six days.

Guards strived to maintain authority and became abusive at times when they believed the experiment was not being monitored. Zimbardo gave them uniforms that included reflective glasses -- an idea he borrowed from “Cool Hand Luke.” One guard was nicknamed John Wayne for his brutal brand of control. Prisoners, meanwhile, plotted escapes and rebellions despite having an option to end their involvement.

In addition to their natural reactions to situations, participants were given roles to play that had been derived from the media. 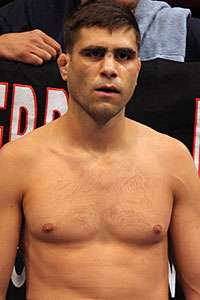 It was an off-handed comment Rich Franklin made to opposing coach Matt Hughes during fighter evaluations on the first episode of “The Ultimate Fighter” season two. Yet, it could come to define MMA’s launch into the mainstream. Eying Luke Cummo’s peaceful demeanor during a strenuous wall-sit exercise, Franklin called the New Yorker “this season’s Diego,” referring to season one middleweight winner Diego Sanchez.

With that, Franklin touched on the Zimbardoesque nature of the show. Roles are filled and recycled. In Franklin’s eye, Cummo was not just another oddball fighter; he was another Diego Sanchez. Gabe Ruediger knows this all too well, as he attempted to become season five’s version of Bobby Southworth by cutting significant amounts of weight in exchange for camera time.

Lying naked beside the pool, Ruediger achieved infamy with his miscalculation when he missed weight and was booted from the show by UFC President Dana White. He blames the incident on multiple factors, from the antibiotics he was taking to his need to establish his personality.

“There are plenty of guys in the UFC that aren’t as known as the guys from the TV show. It creates characters. You can’t buy that,” Ruediger said, “Most guys, you’re gonna get thrown to the wolves.”

Ruediger still receives hateful comments and deals with pre-conceived notions from fans. However, his name continues to ring a bell, which makes the entire experience worthwhile in his mind.

“It’s a reality show,” Ruediger said. “I’m the smartest guy to realize that being normal is not the way to get any exposure. You have to go above and beyond. You have to be yourself on level 15 in order to ensure you get camera time. I mean, there are multiple members of each season that are just forgettable. No one knows who they are. Why is that? Because they didn’t provide entertainment.”

The pressure to perform both as a fighter and an entertainer resonates with season two’s Jorge Gurgel, a Brazilian jiu-jitsu black belt who often left his ground skills at the cage door in favor of more exciting stand-up wars.

“Regardless of any show that has to do with the promotion of the sport that I’ve been doing for 15 years,” Gurgel said, “they’ll always go with in-house stupid drama.”

Season six welterweight winner Mac Danzig admits fighters on the show were as worried about their marketability as they were about their performance inside the Octagon.

“I did notice with the other guys [that] there was lots of pressure,” Danzig said.