Sign up today for WWE Network!! to get unlimited streaming access to every WWE pay-per-view event – including Royal Rumble on Sunday January 27 – and over 10,000 hours of exclusive on-demand content.

It’s not exactly a secret that there’s a particular kissing cousins-type relationship between mixed martial arts and pro-wrestling. On both accords, it’s impossible to tell the story of one without the other. For so many fans who found MMA during its Western infancy, myself included, the early allure to the sport was having grown up a wrestling fan. On the other side of the Pacific, the Japanese MMA industry, which was the nexus of the sport for a decade, is deeply rooted in the evolution of puroresu.

By that same token, that evolution came about as legendary Japanese performers like Antonio Inoki, Satoru Sayama and Akira Maeda sought to make their domestic product more akin to an authentic fight, giving rise to MMA’s popularity and cultural entrenchment itself. It’s not just Japan, though: with the rise of the Ultimate Fighting Championship in the 1990s, America’s “big three” -- World Wrestling Entertainment (then the World Wrestling Federation), World Championship Wrestling and Extreme Championship Wrestling -- all sought to capitalize on its burgeoning popularity by signing no holds barred fighting talent. WWE signed the likes of UFC stars Ken Shamrock and Dan Severn, WCW snapped up the sport’s most popular brawler “Tank” David Abbott and ECW even put its future world champion Taz on the map by giving him a faux-MMA gimmick and having him squash a UFC veteran in Paul Varelans.

For at least the last 30 years, notions of combat have influenced pro-wrestling, while the wrestling world influenced the pageantry and promotion of MMA, on top of giving us sport-defining legends like Kazushi Sakuraba, who cut his teeth in shoot-style promotions. It’s a unique, symbiotic dance that few if any forms of sport and entertainment have with one another. However, for most of this dynamic’s existence, it has been predicated on pro wrestlers showing they’re not merely “sports entertainers” and can compete in a prizefight. All of a sudden this is starting to change and creating some new, entertaining shifts in the world of pro wrestling. 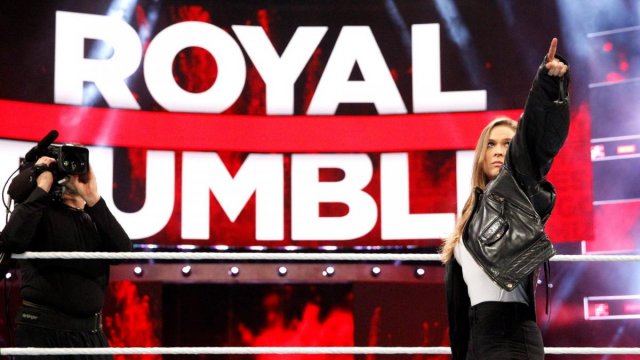 In the span of just of a year and change, former UFC women’s bantamweight champion Ronda Rousey has gone from being one of the biggest five stars in MMA history to being a WWE champion. For years, Rousey and her “Four Horsewomen” crew would show up to WWE events and get on-camera attention, but after her December 2016 loss to Amanda Nunes, the MMA world was already anticipating a shift for Rousey from the cage to the squared circle; by late 2017, “Rowdy Ronda,” a nickname owing to legendary wrestler “Rowdy” Roddy Piper, was already at the WWE Performance Center and training to make a big show debut. When she showed up at the Royal Rumble last year and went face-to-face with Alexa Bliss, it was clear she was on the fast track to the inverse of what we’ve seen for most of history: not wrestling-to-MMA glory, but MMA-to-wrestling glory. 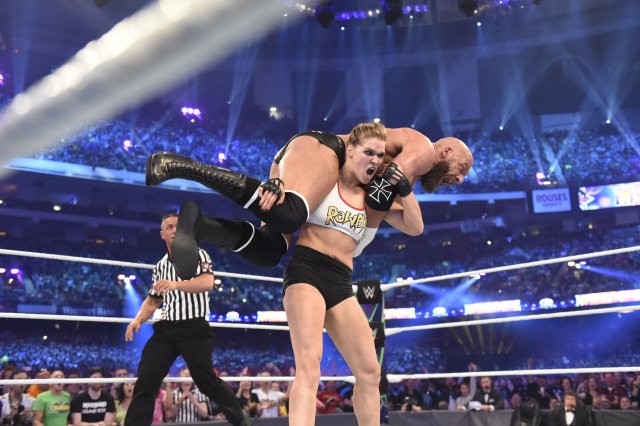 (+ Enlarge) | Photo: WWE
Rousey went from MMA-to-wrestling glory.
She finally debuted at WrestleMania 34 last March, in a performance that pro-wrestling’s foremost journalist Dave Meltzer called “one of the better pro-wrestling debuts I've ever seen.” By SummerSlam in August, she was set up to squash Bliss for the WWE Raw Women’s Championship in four minutes. In a short matter of months, Rousey had transitioned her MMA stardom and style into a legitimate pro-wrestling act that had her on top of the world and yet to be marred. It’s set a template for others.

Rousey isn’t even the first fighter to have this compunction: Matt Riddle, who hasn’t fought MMA in nearly five years, exited the UFC under a cloud of silliness, having two of his last three UFC victories overturned because of his goofy, stoner bro lifestyle. Instead, Riddle made an incredible change of tack in 2014, deciding to beef up from an MMA welterweight to the size of a formidable wrestler and train at Larry Sharpe’s famous Monster Factory. It took him just two years to set the independent wrestling world on fire, earning the Wrestling Observer Newsletter’s “Rookie of the Year” and “Most Improved Wrestler” in the same year in 2016, which is essentially unprecedented. Now, he has transformed his Jeff Spicoli-esque personality into his “The King of Bros” gimmick and has magnetized the pro-wrestling world. This past August, WWE revealed he was the latest signing for its NXT brand and figures to anchor that brand before ascending to the WWE roster in short order. Who would have thunk it?

With the success of Rousey and Riddle, scores of MMA fighters are trying to hop on the bandwagon. Heck, even UFC vets Stephan Bonnar and Phil Baroni have formed a tag team on the independent circuit called “The Real Shooters,” and that’s to say nothing of Tom Lawlor -- more on him later -- actually being a fantastic indie worker right now. Plain and simple, there’s been a recent reversal in the way that people and athletes themselves recognize the duality between pro-wrestling and MMA. In 2019, wrestlers don’t feel like they need to do MMA to prove themselves; if anything, MMA fighters are intrigued by the possibility of getting into the squared circle and seeing if they can hack it. So, let’s take a look at some folks who would be intriguing to see on the WWE roster in short order, in a variety of roles:


First, the obvious. Few MMA fighters are more credited with bringing the flavor of pro-wrestling to MMA than Sonnen, especially vis-à-vis his trash talk with Anderson Silva from 2010-12. What’s even more particular and relevant to the pro-wrestling world is that so much of Sonnen’s trash talk, especially during that period, wasn’t especially unique: it was directly cribbed from former WWE world champion “Superstar” Billy Graham. The man of the hour, too sweet to be sour, the women’s pet, the men’s regret, yadda yadda yadda. In this case, Sonnen’s shamelessness may help his case for being a viable WWE commodity. But in addition to his obvious lifelong fandom, Sonnen has the physicality too: he’s a legitimate, high-level amateur wrestler and even went to tryouts at the WCW Power Plant training center in the late 90’s. Here’s Sonnen’s description -- take it with a grain of salt -- of his Power Plant experience that could’ve led him into the ring rather than the cage.

“I can’t remember how many guys we had but we had some monsters in there, we had some big dudes in there,” Sonnen said on “Stone Cold” Steve Austin’s podcast in 2013. “On the second day there was only two guys left, me and a guy from Jamaica. On the third day it was still just the two of us and that was it. Both of us made it, both of us got invited back, I went and finished college and by the time I had, WCW was gone.”

The ding on Sonnen is that he’s already 41 years old, but despite his amateur wrestling and MMA background, he’s still a healthy and hardy specimen who hasn’t endured too many of the stereotypical neck, back or knee injuries. We’ve seen much older and injured athletes try their hand in the squared circle and “The American Gangster,” while never the greatest actual fighter, also has a very pro-wrestling sensibility at dismissing his MMA failures, which makes him a natural heel you can smirk at. 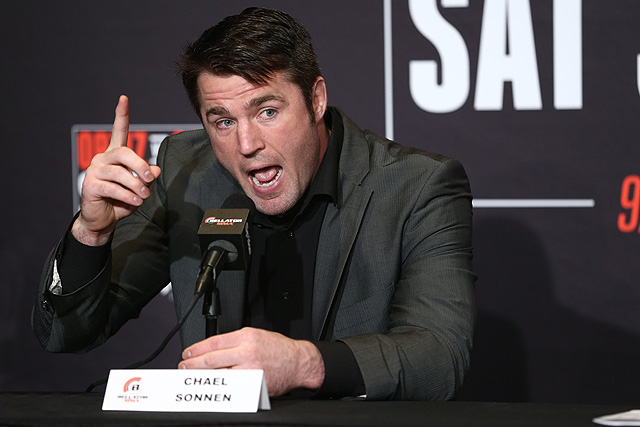 (+ Enlarge) | Photo: PFL
Sonnen is a beast on the mic.
More than that, Sonnen’s penchant for talking might be exactly why he’s ideal for a WWE scenario. First of all, he’s already got the experience: in 2015, Sonnen got a gig doing the heel color commentary role for Jeff Jarrett’s Global Force Wrestling and excelled in the role. Even if his age may be an impediment, Sonnen has the ability to be one of those unique Larry Zbyszko roles, where he is predominately an antagonist inside the commentary booth or interviewing wrestlers, but more than has the athletic chops and sensibility to come out of the booth on occasion, work an angle and do a hot match for a pay-per-view.

“The American Gangster” always stays busy with media projects, as well, meaning as WWE continues to add more original content to WWE Network, Sonnen would be an obvious and likely eager candidate to have a video podcast or some other unique vehicle. I certainly won’t mind seeing him on WWE Network’s Table for 3 or hamming it up with Southpaw Regional Wrestling.