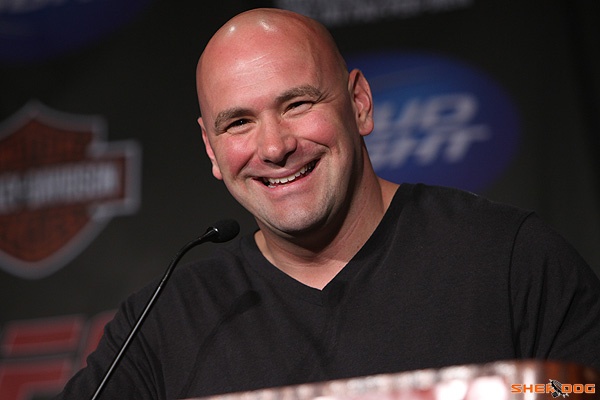 The ratings performance of the Ultimate Fighting Championship’s fourth event on Fox -- and its plans for the fifth -- paints a picture of the promotion’s evolving relationship with its network partner.

Headlined by Mauricio “Shogun” Rua-Brandon Vera, the Aug. 4 card drew the lowest household rating of any mixed martial arts event that has aired on network television, including the EliteXC and Strikeforce shows on CBS. However, the rating did not seem to cause alarm. UFC on Fox 4 went head-to-head with NBC’s Summer Olympics coverage -- which attracted nearly 14 times the primetime audience of the UFC show -- yet performed well in key demographics.

Though ratings have overall trended downward for UFC events thus far on Fox, Eric Shanks, the president of Fox Sports, told Sherdog.com he has no qualms.

“I don’t think you could be much happier,” Shanks said of the UFC’s showings on the network, which last year signed a seven-year, $100 million broadcasting deal with the promotion. “The fight game, as they call it, is predicated a lot on how good the actual fights are; same with a baseball game, same with a football game. There were some quick fights. There were some fights in [the second and third Fox events] that still delivered large audiences and won the night in key demos every time, sometimes even beating all three of the other networks combined. You take a look at UFC on Fox 4, and you have unbelievable fights.”

The two-hour, 22-minute broadcast on Aug. 4 scored a 1.4 average household rating, down slightly from 1.5 for the May 5 event, which established the previous basement number for MMA on network television. The rating reflects the percentage of United States households with televisions that watched the show. The broadcast did slightly more viewers on average than the May show, however, with 2.44 million compared to 2.42 million. UFC on Fox 4 did its highest market ratings in Las Vegas, followed by Louisville, Ky., New Orleans and Tulsa, Okla.

There were several encouraging aspects of the ratings. General viewership increased throughout the broadcast, starting at 1.04 and peaking at 1.79 for the final 22 minutes, which featured gutsy, hard-hitting action between Rua and Vera. The rating for males, ages 18 to 34, the demographic most coveted by advertisers, was a 1.9, a 19-percent increase from the May event. The demo number rivaled those of major sports like baseball. Interestingly, viewership in the demographic peaked as the main event participants were getting into the cage but dropped 10 percent over the course of the fight.

Shanks said primetime television shows with high concentrations of viewers in the 18-to-34 demo have the best shot at growing audience beyond that group. They also command the highest ad rates.

“That’s the hardest audience to attract, and, over time, it seems to pay off,” he said. “Obviously, as that audience grows, then it helps in ad rates, and ad rates is what you base your business plan on. Buying into the UFC on Fox is not necessarily a bargain now [for advertisers] because of the high concentration of 18 to 34s. The pricing is near the top-end of the range for sporting events.”

Despite the fact that all four fighters had soundly fallen to champion Jon Jones, UFC President Dana White looked to bolster the latest Fox event by announcing title implications for the top two fights: Rua vs. Vera and Lyoto Machida vs. Ryan Bader. Title implications have been a motif for Fox main events. Shanks said Fox does not insist on the title implications, but the UFC knows what they add.

“Dana is a promoter, and he’s been a great promoter for a very long time,” Shanks said. “He either feels the heat on a fight, on a matchup, or he doesn’t. He’s a promoter; he’s going to find ways to put heat on a fight. People hear ‘title fight’ or ‘shot at the title’ and you might not know who’s in it, but the fight means something. I think that gets you your initial tune-in.”

The Fox broadcast was the second to feature four main-card fights. The January event had three; the November one-hour special had one. Shanks said the fight load is part of a strategy to keep viewers parked.

“Look, viewers are fickle,” he said. “I mean, they’re sitting on the couch and if there’s a break in the action, they’re going to tune away for six minutes, 10 minutes, and then come back. It’s pretty easy to flip the channel. You increase ratings just as much by getting people to watch longer as by getting new people to the set. So that’s why we’ve settled in this format together with the UFC. We are packing four fights into two hours now. I don’t think you could actually even fit more than that into two hours.”

The August and May ratings were a far cry from what the UFC pulled for its first two Fox events. The January show, which featured Rashad Evans vs. Phil Davis and Chael Sonnen vs. Michael Bisping did a 2.6 rating and 4.7 million viewers. The November show, which featured Junior dos Santos vs. Cain Velasquez, did a 3.1 rating and 5.7 million viewers, making it the most-watched MMA event ever on U.S. television. Those numbers do not include people who watched the events live on Fox Sports Deportes or at a later date on DVR.

Shanks said a key part of the reason the first UFC on Fox did so well was advertising during the network’s NFL games, among the most-watched programming on television. Shanks said the NFL-UFC integration will resume this season, promoting both the Sept. 14 premiere of “The Ultimate Fighter” on FX and the next Fox fight card on Dec. 8.

“Last October, it was a big deal that UFC was being promoted inside of an NFL game; [it] had never been done before. We haven’t had the NFL weight to promote since then,” Shanks said.

In addition to in-studio appearances by fighters during halftime shows, Shanks said executives have also kicked around the idea of moving a UFC event to a Sunday, where it could be paired with a football mega-event like the NFC Championship Game to “make a big day even bigger.”

The December Fox event has the potential to do a big rating, not only because of the NFL integration but also because of the lineup itself. The UFC loaded the roster with three main event-caliber matchups: Benson Henderson vs. Nate Diaz for the lightweight title, B.J. Penn vs. Rory MacDonald and “Shogun” Rua vs. Alexander Gustafsson.

“Do we expect that every fight card is going to be as packed as this on Fox? No,” Shanks said. “You’d love it, but it’s great because we can sit in a room and we respect each other’s businesses. We know what’s on the line with [the UFC’s] pay-per-view business. They know that we’ve put a lot into this relationship, both rights-wise and giving it a slot on network television and using our muscle to promote it. So we both have a lot at stake here, and they get it.

“They realize that you’re not going to get new fans by completely watching pay-per-views,” he added. “You’ve got to put on a great show to 115 million television homes.”