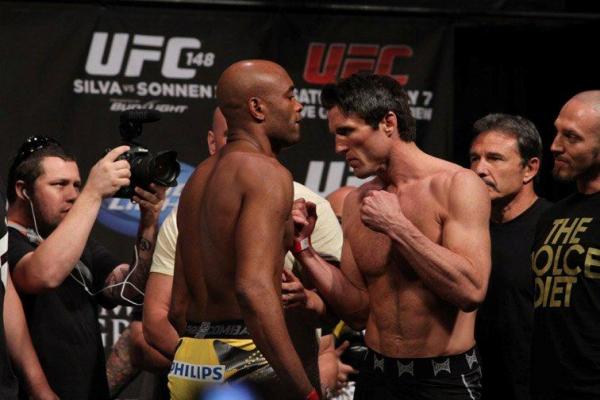 We may look back at July 2012 as the month Anderson Silva’s ability to draw money at the box office finally caught up to his ability to win fights in the Octagon.

The middleweight king’s UFC 148 rematch against state-of-the-art antagonist Chael Sonnen broke the all-time gate record for a mixed martial arts event in the United States, brought Ultimate Fighting Championship pay-per-view buys to the one million mark for the first time in nearly two years and accelerated his exploding profile in his Brazilian homeland.

After his second-round technical knockout victory, Silva, 37, embraced his lippy nemesis, the teeth and limbs of whom he threatened to break in the run-up to the fight. The post-fight warmth could be read as an acknowledgement from Silva of the role Sonnen and his gift of gab played in building more anticipation for this fight than any during his record six-year title reign.

For all his dominance, Silva has never moved pay-per-view orders like contemporaries Chuck Liddell, Brock Lesnar and Georges St. Pierre. Silva’s title defenses have typically hovered in the 300,000-buy range, including 325,000 for his most recent outing against Yushin Okami at UFC 134.

The Independence Day Weekend event did about one million buys on pay-per-view, according to The Wrestling Observer, the highest since UFC 121 was headlined by Brock Lesnar-Cain Velasquez in October 2010. UFC 148 joined elite company as one of only seven events in company history to reportedly reach one million buys.

The event at the MGM Grand Garden Arena in Las Vegas was also a resounding success in terms of ticket sales. The $6,901,655 gate smashed the U.S. record of $5,397,300 for UFC 66 in 2006. Like Silva-Sonnen 2, UFC 66 was headlined by a grudge rematch between Liddell and Tito Ortiz. Ortiz retired in the co-main event at UFC 148 and shared the marquee with Silva and Sonnen. It was the second highest gate in UFC history, trailing the company’s Toronto debut, which raked in $12 million. There were 13,606 tickets sold for UFC 148; 1,498 more spectators were comped. Only 64 tickets for the event went unsold, according to the Nevada Athletic Commission.

For all of the box office spark the Silva-Sonnen dynamic provided, UFC 148 was also boosted by an unprecedented marketing push that had Las Vegas buzzing to an unprecedented degree for a UFC event and caught the eye of mainstream sports news outlets.

The UFC partnered with the Las Vegas Convention and Visitors Authority in building “International Fight Week” around the show. Unlike typical UFC events in Las Vegas that are only promoted by the host casino, the quasi-public authority opened the door to blanket promotion across all Sin City properties, which hosted everything from the UFC Fan Expo to UFC-themed beach parties and pub crawls. The Wrestling Observer reported a record turnout of 8,000 fans for the Friday weigh-ins, and UFC.com saw record traffic all week, including the most views by far for a UFC press conference stream.

The partnership with Las Vegas will continue, cementing Independence Day Weekend as the biggest on the UFC calendar. The company will sell International Fight Week as a destination event in all of the markets it hits around the world. In an interview with The Las Vegas Review-Journal, the UFC’s chief marketing officer projected the week would bring 50,000-60,000 fans to Las Vegas, five to 10 percent from other countries, with strong contingents from Brazil, Canada and the United Kingdom.

The week was so significant the UFC took a preemptive step to deal with counterfeit merchandise sales. The week before UFC 148, the promotion filed a lawsuit in federal court in Nevada against several unnamed parties it expected would try to sell counterfeit T-shirts and other items outside International Fight Week venues.

As big as UFC 148 was in America, the event may have had even more impact in Brazil. Silva- Sonnen 2 aired on a 30-minute delay on Rede Globo, the country’s leading television network. The fight reportedly did a 19 share rating on Globo, which translates to about 22 million viewers, an astronomical number of eyeballs the UFC has never come close to matching on American television. The entire UFC 148 card aired live in Brazil on the subscription channel Combate, which sold the event for the same rate as a monthly subscription. Combate gained 200,000 new subscribers for the show, according to Sherdog.com Brazilian correspondent Marcelo Alonso. The channel had 240,000 subscribers prior to the fight.

Silva-Sonnen 2 was originally targeted for a Brazilian soccer stadium that would have challenged the UFC attendance record. However, a convention in Rio de Janeiro on the targeted date presented too many logistical complications. A delicate negotiation ensued between Silva and UFC President Dana White before a previously scheduled press conference in Brazil. Brazilian sports news outlet “O Globo” reported Silva insisted on fighting in Brazil during the 75-minute meeting but agreed to the move after White stressed the amount of promotion in Las Vegas for the event and the pay-per-view sales it would generate.

In all likelihood, UFC 148 was the most lucrative night of Silva’s career, as he is one of the select UFC fighters who receive a cut of each pay-per-view purchase for his fights. Soares would not confirm how much Silva gets per buy, but such arrangements are typically on an escalating scale, with the highest per-buy rate coming for each order over 300,000. A clause in Randy Couture’s UFC contract, disclosed in 2007 as part of a lawsuit, maxed out at $3 per buy.

The blockbuster numbers put Silva’s management and the UFC in a tough position, trying to arrange lucrative fights in a division where most of the challengers are unproven as pay-per-view attractions. Soares said challengers like Chris Weidman and Tim Boetsch, both of whom notched wins in July that could justify title shots, do not make business sense.

“I don’t want to revolve it around money all the time, but come on, man, that’s what it is,” Soares said. “We want big fights. Unfortunately, fighting a guy like Chris Weidman at this point in his career, fighting a guy like Tim Boetsch at this point in his career ... it’s going to do more for Tim Boetsch or Chris Weidman at this point in their career; but that’s just how I feel. If the UFC says, ‘Hey, I don’t give a s---, you’re fighting him,’ he’s going to fight him. For Anderson, I’d like to see him do the biggest fights possible, and, right now, be it at a catchweight or whatever, I still think the biggest fight possible at this point is Georges St. Pierre.”

In the interim, it appears Silva’s profile is going to grow appreciably. He created buzz when he Tweeted pictures of himself at Nike headquarters in Oregon after UFC 148, wearing a Nike shirt that read “SILVA KNOWS.” Soares confirmed to Sherdog.com that Silva has reached an endorsement deal with Nike, making him the first UFC fighter to do so. Silva wore the Nike Swoosh on his walkout gear at UFC 148.

“It was a dream come true to see him have a Nike deal; it’s been a work in progress for the past six to eight months, maybe over a year,” Soares said. “There’s no other fighter in the world that should be the first to have a deal with Nike more than Anderson. He’s the Michael Jordan of the sport and he deserves that.”