Jonathan Goulet arrived on Sunday at Fort Bragg in Fayetteville, North Carolina, tired but in good spirits for his welterweight bout against fellow striker Mike Swick Wednesday for UFC “Fight for the Troops” on Spike TV. Goulet (22-9) said that all of his preparation for Swick (12-2) has gone perfectly.

“The training was very, very good,” said the Victoriaville native. “Everything was hard because I had to come back into the gym after having been out for awhile. It was very hard mentally and physically, but I busted through and now I’m ready and very excited to fight.”

Goulet is referring to the foot he broke over the summer twice, which prevented him from stepping back into the Octagon since his UFC 83 win over Kuniyoshi Hironaka last April.

To prepare for Swick, Goulet trained with the usual Montreal motley crew of Georges St. Pierre, Patrick Cote, David Loiseau, and Denis Kang. But despite the star power and the excellence they bring onto the training floor, Goulet’s most valuable training partner might be strength and fitness coach Jonathan Chaimberg.

“It’s really hard with Jonathan Chaimberg,” said Goulet. “But that’s the kind of training I really like. It’s always a challenge to go there, and every time I finish training I feel exhausted, but I feel really well because the work is always well done.”

Goulet said that he and the other fighters compete seriously against each other when going through Chaimberg’s workouts, but for the past two weeks Goulet had the trainer’s undivided attention -- something he thinks will prove to be a major factor on Wednesday.

“Every time I’m training with Jon, if I’m not close to throwing up, it’s not good training,” he said. “I always push myself as hard as I can so that when the fight comes I know that I will be able to push the pace.”

Five days away from his middleweight clash against Wilson Gouveia (11-5) at this Saturday’s “The Ultimate Fighter 8” Finale, Jason MacDonald (21-10) is at home in Red Deer, Alberta, running errands with shrieking kids in the car.

“It’s pretty crazy. It’s been a quick two years since I made my UFC debut and it just flew by,” says MacDonald. “It’s hard to believe how fast it’s gone by.”

This will be MacDonald’s ninth fight in the UFC and his fourth this year, but if it were up to him there would be even more bouts under his belt.

“When you’re sitting for months at a time it’s hard to continue to stay motivated and sharp, and it’s hard to spar four to five days a week for a whole year,” he says. “When you have a fight coming you tend to train a little more intensely and I tend to stay sharper as a fighter. I’ve had some of my best years when I fight five or six times a year.”

Always polite and friendly and never sullen or surly, MacDonald is arguably one of the more popular fighters on the UFC roster. MacDonald realizes that you can be the best fighter in the world, but if the fans don’t like you, they won’t care about you. So MacDonald takes pains to ensure that the fans will never have anything bad to say about their experiences meeting him. He also knows you still need to keep the boss happy if you want to keep your job.

“The UFC is still an entertainment business; it’s all about entertaining the fans,” he says. “I don’t claim to be anything more than what I am. I’m not the best middleweight in the division; I’m far from it. But regardless of who I’m fighting I’m going to give them a tough fight and I think the fans appreciate that, and I think that’s why I’ve enjoyed the tremendous amount of support that I have over the years.” 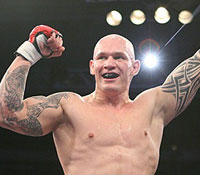 Photo by Sherdog.com
Soszynski was a favorite
heading into the series.
Soszynski on TUF Finale and Sherblog

Despite the fame and fortune that the “The Ultimate Fighter” reality TV show can bring a fighter, it sometimes feels like a lifetime to get there. The long road will be coming to an end this weekend for all sixteen of this season’s contestants, as they’ll be squared off against one of their former housemates at “The Ultimate Fighter 8” Finale, live on Spike TV from The Palms in Las Vegas.

One of those sixteen will be Krzysztof Soszynski (15-8-1), who faces fellow light heavyweight Shane Primm (1-0).

“I’m ready and excited,” Soszynski told Sherdog.com. “It’s been a five-and-a-half year dream in the making and it’s almost there, so it’s been an up and down road and I’ve been very pleased and excited about the opportunity.”

Originally from Poland, Soszynski and his family moved to Winnipeg, Manitoba when he was 10 years old. Earlier this year, he and his new wife made a big decision to move to Temecula, Calif. so the fighter could be closer to Dan Henderson and his Team Quest teammates.

Soszynski was a heavy favorite heading into the series and was one win away from making it into the finals, but a slick and quick armbar from former Team Quest teammate Vinicius Magalhaes put an end to his run in the quarterfinals. It’s something that he thinks about often.

“To be honest with you I’ve been kicking myself every day since the fight happened,” said Soszynski. “I knew going in that he would try to get the fight to the ground in any way possible, and I knew what I had to do -- keep it on my feet, wait to try to get it into the second or third round because if that’s where Vinny gets tired that’s where he’s going to break.”

That obviously didn’t happen, as an initially cautious Soszynski did what he planned not to do and got caught in grabbing range of the three-time Brazilian jiu-jitsu world champion.

“I was very patient, going forward and throwing leg kicks to slow him down,” he said. “I wasn’t expecting him to pull guard like that and he did. He had both my hands trapped and he extended the armbar very fast. I was upset that he did it so quickly, and I wish I would have been able to figure him out.”

Soszynski said that as Team Quest teammates for a year and a half, he and Magalhaes knew each other’s strengths and weaknesses very well, and despite Magalhaes leaving Team Quest this fall, he still hopes he’ll beat Ran Bader in the final.

“Even though we’re no longer teammates, I’m still going to be pulling for him,” he said. “It’s going to be very tough fight for Vinny, but if he gets it to the ground and does what he does best then I think he’s got a good shot at submitting Bader.”

Soszynski also has thoughts on the lightweight final between Efrain Escudero and Phillipe Nover.

“It’s going to be very interesting, and I think Phillipe is going to take this fight,” he said. “He’s such a calm guy outside of the ring, and in the house he was a nice, calm guy, and then all of a sudden he turns that switch on when he steps into the cage. I don’t think Efrain can do anything to stop Phillipe.”

In addition to watching him on the show, many readers got to know Soszynski from his extremely popular “Sherblogs” that followed the day after every TUF episode.

“It was a lot of fun. I had a lot of offers from other Web sites, but for me, Sherdog was the best pick,” said Soszynski.

As for his own match against Primm, Soszynski said that he didn’t care who he would be fighting at the finale.

“It really didn’t matter to me who I was facing,” he said. “I feel comfortable going up against anybody whether it was Eliot, Tom Lawler or Shane, it didn’t matter. I think I can beat all of those guys. This is the opportunity to get me into the UFC and to make it to the next level that I’ve been waiting for. My prediction with Shane is that he’s gonna go down with a TKO, referee stoppage due to strikes standing or on the ground, late in the first round.”