Brian Stann has emerged as a contender at 185 pounds. | Photo: Dave Mandel/Sherdog.com


ALBUQUERQUE, N.M. -- At first, Brian Stann was reluctant to talk about his time in the Marine Corps, but as he began his mixed martial arts career by pummeling overmatched foes in the WEC, it seemed that was all anyone -- from the promotion itself to the media -- wanted to talk about.

The Pennsylvania native’s story of how his platoon managed to survive a nearly week-long assault in Karabilah, Iraq, in 2005 without any casualties is the stuff of which true legends are made. For his leadership and valor in the face of the enemy, Stann was awarded the Silver Star.

It took some prodding from one of his superiors, but Stann gradually warmed up to talking about his experience in hopes that it would serve as an eye-opener to the public that there was more going on in the Middle East than was shown on TV. Since Stann had only a burgeoning reputation inside the cage, it was the obvious angle for any type of promotional campaign involving the Naval Academy graduate.

During his formative years in MMA, Stann was more of a physical specimen than an established commodity. He blasted through each of his first six foes inside of a round, getting by on raw athletic ability and toughness rather than well-balanced training. Recently, however, Stann is receiving as much attention for his work inside the Octagon as out. His technical knockout of Chris Leben at UFC 125 -- it was just the second time “The Crippler” has been stopped by strikes in a 32-fight career -- served notice to the rest of the middleweight class that the former Marine plans on being a major player in the UFC for a long time.

“I think people in the division certainly respect me a lot more,” Stann says. “I think they realize that I don’t have just one trick -- that I can fight in this sport. The most dangerous thing about me is that I still have so much more to improve on, so I’m only gonna get much better from where I am here.”

‘Sitting in a Pretty Seat’

Leben was on a roll before he ran into Stann, having knocked off Aaron Simpson and Yoshihiro Akiyama within a two-week span. On Saturday, Stann will face another opponent riding a wave of momentum when he takes on Jorge Santiago in a featured UFC 130 bout at the MGM Grand Garden Arena in Las Vegas.

Santiago enters the bout having won 11 of his past 12 fights since leaving the UFC after consecutive losses to Leben and Alan Belcher in 2006. The former Sengoku Raiden Championship middleweight titleholder garnered Sherdog.com’s 2010 “Fight of the Year” for his fifth-round technical knockout of Kazuo Misaki at SRC 14 and currently sits at No. 7 in the world rankings at 185 pounds. Santiago’s credentials could very well mean that Stann will be overlooked, as he was against Leben. However, his marked improvement since joining Jackson’s Mixed Martial Arts, coupled with his move to 185 pounds three fights ago, means betting against the 30-year-old could be a mistake. 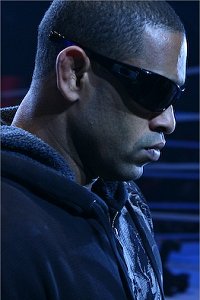 Jorge Santiago File Photo
Santiago has won 11 of 12.
“Brian might be going into this fight as an underdog just because of Santiago’s experience, but I believe that Brian’s been in bigger fights,” says teammate Joey Villasenor, who defeated Santiago at King of the Cage 58 in 2005. “He fights Chris Leben, and nobody gave Brian a chance in that fight. We all knew what Brian could do. Now look where Brian’s at. He’s sitting in a pretty seat -- looking good. But a lot of it comes from going in the right weight class.”

Stann began to cut his teeth on the sport at the Marines Corps Center for Martial Arts Excellence, where he honed his straight-ahead brawling style with a group of former wrestlers and an ex-Toughman contestant.

As the victories began to mount, Stann’s success became something of a joke among his training partners because their cumulative lack of experience did not seem to portend success in a professional arena. Whatever they were doing was working.


From January 2006 to March 2008, the longest time Stann spent in the cage was the 4:57 it took him to finish Craig Zellner at WEC 28. In preparation for that bout, Stann recalls asking a karate instructor in Camp Lejeune, N.C., for the use of his gym. He was granted permission to use the facility’s mats and heavy bags in the afternoon.

Less than a year later, he was WEC light heavyweight champion. Still, it eventually became clear that, as Stann might phrase it, the ex-Navy linebacker was going to need “more information flow” to have any hope an extended career.

Steve Cantwell wrested the light heavyweight title from Stann at WEC 35 right before the promotion dissolved its heavier weight classes to focus on the lighter divisions. Upon moving to the UFC, Stann remained a light heavyweight with mixed results, splitting four bouts, including a victorious rematch with Cantwell.

The quality of Stann’s training increased exponentially upon his relocation to Albuquerque, but his lopsided unanimous decision defeat to Phil Davis at UFC 109 convinced him that a move to middleweight would be best for his career.

“I think Brian was never a big light heavyweight to start with,” says striking coach Mike Winkeljohn. “It was a great move, and it has reinvented Brian.”

That reinvention began at UFC Live 2 in August, when his triangle choke of Mike Massenzio earned him “Submission of the Night” honors. It was the triumph over Leben, however, that showed Stann had an ability to blend the punching power that was evident early in his career with newfound technique and composure.

“The new Brian Stann has his eyes open, and even probably more important than the fact that he’s able to do power with angles and understanding is that he’ll stay calm,” Winkeljohn says. “I think he knocked out Leben three times that night, and he just kept coming. After [Stann] hurt him the first time to the head, he went to the body. That’s a big maturity level jump right there -- to be able to go that way.”

Stann sees some advantages in entering MMA at an older age than most.

“My technique and my skills started to catch up with my athleticism,” he says. “I came into this sport late but I am a very good athlete, and it allows me to pick up some of the skills a little bit faster.”

Finish Reading » No Slowing Down