Amanda Lucas wants to be known for more than just her last name. | Photo: Taro Irei


TOKYO -- On only her second day in Japan, Amanda Lucas -- daughter of “Star Wars” creator George Lucas -- is scheduled to do a photo shoot to endorse a clothing brand dubbed Helmet, worn recently by Japanese fighting standouts Shinya Aoki and Masakazu Imanari.

In spite of the media attention before her first fight in Japan -- just the third in her overall career -- Lucas is more preoccupied with cutting weight for her Aug. 26 bout than ruminating over the novelty of the situation. Lucas conducts the shoot as expediently and professionally as possible and moves on. This is not the first nor the last time this kind of attention will come her way, whether she has courted it or not. She is no stranger to it.

In just under 20 minutes, she has modeled four shirts, a rash guard, a pair of fight shorts and a jacket. Aside from Lucas’ comfort with cameras, this blur of efficiency is helped along by the energetic direction of the photographer’s brother, Tomoki Nakagawa, owner of the Helmet brand. Nakagawa also happens to be Deep’s ringside physician and is a surgeon and surgery teacher by day. Furthermore, he is Deep promoter Shigeru Saeki’s personal physician and a fixture in the fan community as Deep’s primary blogger.

He is a fussy, energetic tangle of long limbs who not only conducts an average of eight major surgeries a week but on a nightly three hours of sleep. Just this week, he patched up a patient who had an arrow stuck in his chest and had the cell phone pictures to prove it. He imperiously orders his photographer brother around, telling him what shots to take and how to take them. Eventually, he even takes a camera himself and starts shooting.

Nakagawa’s animated character brings smiles to the faces of Lucas and her husband, Jason, but, more importantly, it takes her mind off of the stress of the weight cut.

Since arriving in Japan, Lucas has been on the clock. Her phone alarm blares every few hours with reminders either to eat a specific item or to drink a certain amount of water for the hyper-hydration process -- all this in an effort to shed the final 10 pounds to hit the weight designated by her opponent at Deep “55 Impact,” Hikaru Shinohara.

Given Lucas’ desire to compete at 145 pounds, she originally proposed to take the fight at 150. For whatever reason, Shinohara instead requested it be 156, a weight to which Lucas, thankful for an opponent and the opportunity to fight, agreed with no protest. 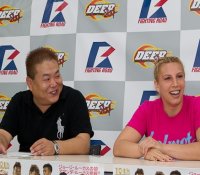 T. Irei
Deep boss Shigeru Saeki has
big plans for Lucas.
“I was having trouble getting fights in the states. People weren’t making weight and promotions couldn’t find equivalent opponents for me. I’ve only had two pro and no amateur fights, [so] I knew I’d be fighting against girls who maybe had either a lot of amateur or pro experience,” Lucas tells Sherdog.com.

Lucas’ third bout was originally scheduled to be against Heather Martin at Freestyle Cage Fighting 46 in April. She withdrew from the bout when Martin clocked in at 178 pounds, 13 pounds over the agreed upon 165-pound limit.

Enter Saeki and Deep with an offer to provide the opportunity to fight consistently, as well as help her develop step-by-step into an experienced fighter at a more viable weight class.

“They’ve given me an opportunity, and they’ve been nothing but fantastic to me. I just want to fight, really. I’m not old, but I feel like fighting every year and a half isn’t working for me. I want to stay consistent, focused and in the gym. That’s easier when I have a fight lined up,” says an appreciative Lucas.

The crux of Lucas’ reasoning for competing in Japan boils down to the one desire all fighters harbor: she simply wants to fight, and consistently if possible. However, what of Japanese MMA’s reasons, let alone Saeki’s and Deep’s to invite her over?

It is not difficult to envision the potential Saeki sees for Deep, given Lucas’ background. To wit, Saeki’s recent comments of his desire to make Deep “the Strikeforce of Asia” in terms of cultivating its women’s division speak directly to this plan of leveraging Lucas’ name toward that end. Mercenary though it may be when presented in these black and white terms, this arrangement does mutually benefit both parties. 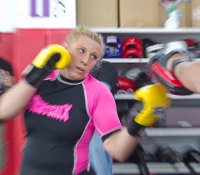 T. Irei
Lucas is tirelessly dedicated.
“I don’t think it’s a secret that that’s part of the reason I was brought out, just so that I can bring some attention. I totally understand it. I wasn’t expecting to have my own press conference [on Wednesday], though. That kind of threw me,” Lucas says with a delighted, if slightly embarrassed laugh. “I don’t fight because of my last name, but if I’m getting the opportunity [to fight] and I can bring in fans because of it, then that’s cool, and I appreciate it. I just want to put on a good show and do what I do.”

For Deep’s part, Lucas has so far delivered. She has attracted an inordinate amount of attention from both combat sport publications and non-kakutogi entertainment media.

After her Aug. 24 press conference at Deep gym, Lucas entertained an interview for one of Japan’s popular film websites, Cinematoday.jp, of course speaking more about her father and her minor roles in the Star Wars prequels than MMA. Weeks prior to that, Lucas had column space and page spreads devoted to her in two of Japan’s most widely read weekly periodicals in Tokyo Sports and Shukan Bunshun.

Shukan Bunshun, in particular, holds a circulation of 680,000 -- one of the largest for the innumerable weekly periodicals in Japan -- and typically addresses all range of topics from entertainment and politics to sports and scandal. While the publications are not exactly running front-page, above-the-fold features on her, Lucas as a novelty topic is still breaking into Japan’s mainstream press in a way that kakutogi was only seen doing in the early ’aughts.

On an individual level, Japan’s own geek culture has also responded in small ways. “Star Wars” otaku carrying photos of Lucas can be found milling around her hotel and days later at Korakuen Hall, hoping to get her autograph and wish her luck for her coming bout. Of course, this all comes by way of her family background rather than any concerted effort on her part to draw attention. In fact, Lucas and her husband try to evade the prying eyes of the public whenever possible, though they are not hostile to its occasional and inevitable intrusion.

“I think we’re pretty low-key people. Actually, I trained with people for years before they realized who my family was. Once the New Zealand fight happened, and it got splashed all over the press, they were, like, ‘Oh my God, I had no idea,’” Lucas recalls, pointing to a May 2008 bout.

“It’ll actually catch me off-guard when a grown adult comes up to me and asks, ‘You’re George Lucas’ daughter, aren’t you?’ And I’m thinking, ‘Did you really just say that?’ Ever since I was little, I’ve only wanted to be normal,” she adds. “My dad has done amazing stuff and he deserves recognition, but I don’t think being famous is all that fantastic.” 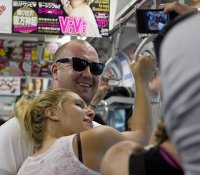 T. Irei
Lucas' trip wasn't all business.
Despite her desire to lead a mild-mannered “normal” life, certain artifacts of her wealth and family fame cannot be denied as they creep into her MMA career in particular ways.

Since beginning her training at San Francisco’s Fairtex gym seven years ago, Lucas has become acquainted with some of the sport’s best in Strikeforce middleweight champion Jake Shields and lightweight champion Gilbert Melendez. Currently, Lucas splits her training time between Melendez’s Skrap Pack camp in San Francisco and the Throwdown Training Center in Las Vegas under “The Ultimate Fighter” alum John Wood. Her training and fight camps thus benefit from some of the best trainers, nutritionists and strength
coaches in the MMA and fitness worlds.

Certainly, it is not lost upon her that having such a wealth of resources as a budding mixed martial artist is extremely rare, given that most fighters never have access to top-shelf training before they have already become famous and successful.

“I’m just lucky that I’m able to [be a wife] and to train and do what I love,” reflects Lucas. “Honestly, I have so much respect for people that work a full-time job, train and fight. I have a hard enough time juggling the business stuff [Jason and I] do, taking care of my husband and our house and getting all my training in. I don’t know how people do it, so I realize how super lucky I am.”

Finish Reading » “With her background, she could totally be a princess, you know? But she doesn’t want to. She wants to be a fighter.”