It’s one of the sport’s most common narratives. An aspiring fighter strings together a living in a conventional line of work while moonlighting as a mixed martial artist, eventually risking that financial stability for a shot at professional stardom.

Forrest Griffin famously left a job as a campus police officer to pursue a career in the Ultimate Fighting Championship.


Advertisement
Phillip Miller did just the opposite.

Today, the undefeated UFC veteran patrols the San Fernando Valley as a member of the Los Angeles Police Department, making traffic stops and breaking up fights one minute, busting graffiti vandals and petty thieves the next. The pace is moderate. Of course, Miller and his partner, who is also trained in grappling and striking, are ready to get physical if necessary.

“I’m just one of those guys that stuff never happens to. I look for it every day,” Miller said of his job. “We go out there and we’re ready, and nothing ever happens.”

This is the life for which Miller ended a promising fight career. As he tells his story, there’s not a hint of regret in his voice, even though the one-time conqueror of notables like Jake Shields and Mark Weir is on the very short list of fighters who retired without a single loss.

“You know, it’s a career that’s not supposed to be long,” said Miller, 16-0. “You’re supposed to get in, you’re supposed to put your mark in, and then get out. The longer you stay, the more long-term damage you do. For each fighter, it’s his own decision. How much is he willing to give up for that paycheck?”

For Miller, 29, the answer was about three years of his life. A wrestler with little grace but plenty of grit, Miller last fought in 2003, a three-round drubbing of Moacir Oliveira. As he laid in heavy-duty strikes on an opponent who may have been well advised to concede, Miller didn’t know it was going to be his last fight. He was undefeated, but he didn’t feel invincible. He knew that, eventually, inevitably, he would be the one on the other side of such an attack.

“I was just hammering on that guy for three rounds,” Miller said. “At the end of that fight he couldn’t even stand. As soon as he left the ring, he was just puking. We were all supposed to go take a piss test. And they were like negative on the piss test. (They said), ‘He’s got to be taken in an ambulance to the hospital.’ And I was just like, ‘You know what? I would have done the same thing if I was in his position.’ You know when you’ve got the personality that you’re just not going to quit.” 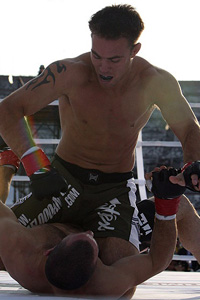 Dave Mandel/Sherdog.com
Miller owns a victory
against Jake Shields.
Phillip Miller was born in Utah, but spent most of his life in Hesperia, a city of about 100,000 in California’s High Desert. Both of his parents were schoolteachers, and his father was the wrestling coach at his high school. As a Serrano High School wrestler, Miller made it to the state championships as a junior. He placed eighth in the state his senior year.

He then wrestled at Brigham Young University for a year before his father, who taught English, suffered injuries in a car crash that left him bedridden. This prevented him from coaching the high school wrestling team, and Phillip was called back home to temporarily fill the void.

When several area schools got together to practice, Miller talked up one young grappler in specific. Joe Stevenson was a Victorville kid who was already dabbling in professional mixed martial arts at age 16.

“He was asking me to work out with him, help him out on his wrestling,” Miller said of the current UFC star. “So I started helping him with his wrestling and he told me, ‘Hey, there’s another place that we can go and wrestle.’”

That place was Williams Combat Grappling, run by King of the Cage and Gladiator Challenge founder Tedd Williams, a UFC veteran. It was there that Miller began training submissions amongst fledgling pros like Stevenson and Jason Lambert. For a long time, Miller wanted to be able to say he competed in one professional fight. He got that chance in January 2000 in San Diego, where he used dominant ground work on Ben Sablan, which forced the kickboxer to emit a shout that the referee took for submission.

Opportunities continued to present themselves. In July 2000, Miller entered a tournament that was part of an International Fighting Championship card in Friant, Calif., headlined by Chuck Liddell. In the first round, Miller faced current Strikeforce headliner Jake Shields.

“It was a battle,” Miller said. “At that time, guys were just doing what they were comfortable with. So you figure it’s just going to be ground-and-pound between two wrestlers. But we did everything. We slugged it out on our feet, slugged it out on the ground, went for submissions. It was probably the most exhausting fight I had.”

Miller got the decision after two eight-minute rounds, and went on to submit Rick Kerns with an armlock to win the tournament. He won another tournament in 2002, a three-fight bracket held on a Jamaican resort, under the World Vale Tudo Championship banner. Miller’s 2001 fight against Pride veteran Shungo Oyama ended in the second round after Miller damaged him with steady ground strikes. It was a scene Miller would later recall as emblematic of why he felt justified in leaving the fight game.

“He actually detached his retina, he was bleeding out his ears when the fight was over,” Miller said of Oyama. “It was not necessary for the fight to go that long. I had him in a position where I was free to hit him and he couldn’t put up much of a defense. But he refused to tap out. And I put myself in that situation, and I probably would have done the same thing.”
« Previous Fred Ettish: Where Is He Now? Next Ron Van Clief: Where Is He Now? »
More
Latest News
ALLUFCBELLATORPFLONE