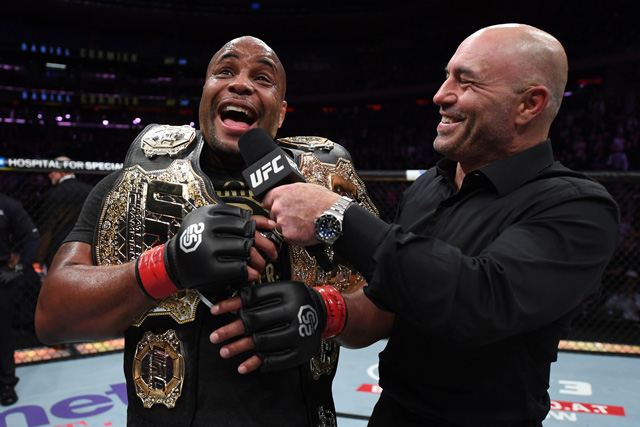 2018 is in the books and depending on whom you ask, it was either one of the best or one of the most regrettable years in the Ultimate Fighting Championship’s history.

In between weight cutting hullabaloos, dollies being thrown through bus windows, worryingly low TV ratings and one record-setting pay-per-view, the UFC signing a broadcast and streaming deal with the Worldwide Leader in Sports and the promotion finally planting a flag on Russian soil, there were also some pretty incredible fights -- and some turnover in the championship ranks.

Going into 2019, many questions remain about the future of certain divisions (I’m looking at you, flyweight and women’s featherweight) and who will contend for titles in the ones that remain. But that’s no reason not to wildly speculate who will appropriate some UFC gold for their top shelves, and how they might navigate the promotion’s torrid politics to get to the top of the mountain.

Prediction: “DC” beats Stipe Miocic in a rematch during the first half of 2019, then makes a quick turn around to win a contentious split decision to Jon Jones in the third and final defence of his title before riding out into the sunset. A fight between Cain Velasquez and Jones for the vacant championship is tentatively scheduled for the first quarter of 2020.

Explanation: There are a lot of moving pieces at heavyweight, making a prediction for the next 12 months difficult, if not outright futile. Cormier is still paying lip service to a March retirement on his 40th birthday, plans for “DC” to defend against Brock Lesnar are “up in the air,” Miocic is still out there on the picket line demanding a shot to reclaim his belt and Jones just won a version of the 205-pound title for the third time (fourth if you count his UFC 214 victory that was later overturned to a No Contest) before calling out Cormier.

This is the prediction I’m least confident in, and I changed it three times on the walk home to write this column. But let’s roll the dice and see if I can’t make it to filing without changing it a fourth time.

The first component in this forecast is that Lesnar will not fight “DC” as originally planned. Lesnar is reportedly getting paid an ungodly amount of money to remain atop the World Wrestling Entertainment marquee after the company’s top star Leati Joe Anoa’i (better known as Roman Reigns) was diagnosed with leukemia and went on hiatus to receive treatment. Since that became public, UFC President Dana White has feigned ignorance about Lesnar’s future, suggesting the former heavyweight champion might be sitting back hoping to drive the UFC into a bidding war with the WWE. Considering that Lesnar hasn’t (officially) won an MMA contest in over eight years, is 41 years old, is coming off a failed drug test and would likely be cannon fodder to the incumbent champion, my money says that he wisely prices himself out of a fight with “DC” and never graces the Octagon again.

… which paves way for Cormier to fight somebody else in heavyweight, and according to the former Olympian on the MMA Hour this weekend, that person would be Miocic, who “DC” melted in July to become the second “Champ Champ” in the organization’s history. ‘But what about a third fight with Jon Jones?’ I hear you yelling -- that's coming. But it looks like “Bones” might want to have a quick turnaround and defend his newly acquired light heavyweight belt sometime early in 2019 (which we’ll get to below), making their itineraries difficult to line up in the short term.

I think DC makes integrity moves and fights Miocic in the rematch around March, and it goes much the same way as the first fight. Meanwhile, Jones slices through Anthony Smith sometime in the first quarter of 2019 and tweets Cormier in between rounds that he’s his “daddy” and is coming up to heavyweight. That sets up a third and final showdown between Jones and Cormier -- justifiably pushing back the latter’s retirement -- that will comprise the defining chapter in both men’s legacies.

Logically, the winner of that fight should be Jones -- he has two (unofficial) victories over Cormier already -- but “DC” was having success at UFC 214 before he got caught and I think he poses much more threat at heavyweight than at 205 pounds.

I’m picking “DC” to ride the astonishing momentum he picked up in 2018 right through this year and into retirement. That is until this column gets published, when I’ll inevitably change my mind.