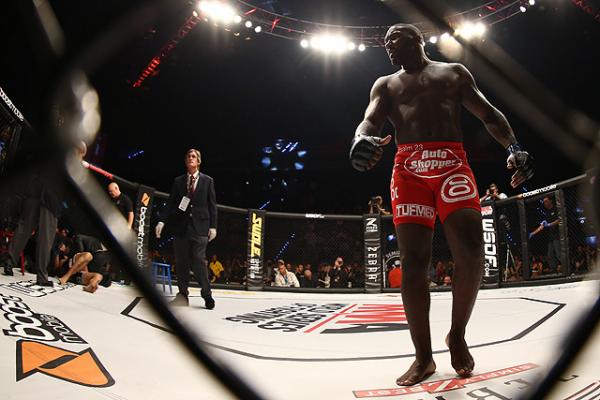 Anthony “Rumble” Johnson is on quite a roll. | Photo: Dave Mandel/Sherdog.com


A new era in the Ultimate Fighting Championship’s marquee division begins at UFC 187 on Saturday at the MGM Grand Garden Arena in Las Vegas. Longtime light heavyweight champion Jon Jones was stripped of his title and suspended indefinitely due to a hit-and-run accident, and former title challenger Daniel Cormier steps up on short notice to take on Anthony Johnson for the vacant 205-pound crown.

Jones’ long shadow hangs over the event like a looming storm cloud, but the main event features one of the best possible fights in the division, even if the winner will not truly be the best light heavyweight in the world. Moreover, the rest of the card is stacked with talent. The co-main event features a long-awaited middleweight title scrap between Chris Weidman and Vitor Belfort. While Khabib Nurmagomedov was forced to withdraw with an injury, action fighter extraordinaire Donald Cerrone is still on the roster and draws fellow striker John Makdessi. Andrei Arlovski and Travis Browne will put on a concussive heavyweight bout, and a quartet of talented flyweights offer an entirely different brand of fun. Even the depths of the undercard are stacked with talent, featuring names like Justin Scoggins, Colby Covington, Rose Namajunas and debuting blue-chipper Islam Makhachev.

Despite the recent hits, this is an outstanding card from top to bottom. Let us take a look at each UFC 187 “Johnson vs. Cormier” matchup: 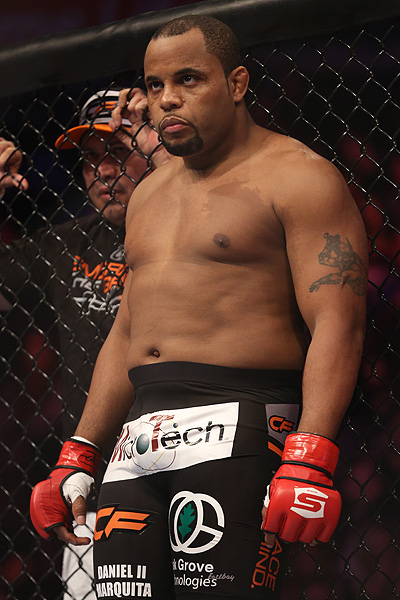 Photo: D. Mandel/Sherdog.com
Cormier will get a second chance.
THE MATCHUP: With the indefinite departure of pound-for-pound great and longtime light heavyweight champion Jones, former title challenger Cormier steps up on short notice to take on Johnson for the belt. Since returning to the UFC in 2014, “Rumble” has been on a roll, dominating Phil Davis in a three-round decision and then flattening Antonio Rogerio Nogueira and Alexander Gustafsson in style. Cormier dropped a five-round decision to Jones in January, but prior to that had been undefeated. This is one of the best matchups in the division, and the fact that it is now for the undisputed title, technically speaking, makes it all the more compelling.

Blackzilians striking coach Henri Hooft has refined Johnson’s raw aggression and unreal physical tools into the form of a polished and devastating bomber. “Rumble” still gets a bit wild at times, but these days, he displays a much more technical and consistent approach. At the most basic level, Johnson is a pressure fighter who does his best work walking forward, using his low kicks to cut off escape angles and pushing his opponent toward the fence.

What sets Johnson apart from the basic pressure fighter, however, is his skill on the counter. He consistently moves his head and maintains a tight guard as he wades forward into the pocket, which keeps his hips loaded and ready to fire a vicious power shot the moment his opponent throws, all while making him very difficult to hit cleanly. Uppercuts, right and left hooks and overhands are the order of the day, and all of them carry the force necessary to put any opponent to sleep in short order. He does an excellent job of using his jab to measure distance, and he slips in a no-switch left high kick when his opponent’s hands move out of position.

World-class defensive wrestling allows Johnson to utilize his potent striking arsenal. His hips are incredibly strong, his sprawl is lightning-fast and he shucks off single-leg attempts effortlessly, sneaking in short uppercuts, hooks and knees on the break. Johnson shoots a gorgeous double-leg of his own, though he has not needed it much lately. He rarely looks to spend much time in the clinch, preferring to create space and throw on the exit, but when the mood strikes, he is a devastating dirty boxer. On the mat, he scrambles quickly -- sometimes too quickly, giving up his back unnecessarily - when taken down; from the top, he is mostly content to control. He is capable of doing exceptional damage from the top ride, however, and is relentless when his opponent is hurt.

Cormier has built on his outstanding physical tools and world-class wrestling base with a technical striking game. He fights long despite his lack of height, utilizing a crisp jab, front kick and round kicks at all levels. Once he works his way into the pocket, he displays a fondness for Russian-style casting hooks that extend his reach a few extra inches. He is not the puncher he has sometimes been made out to be, though his shots do carry some force; he tends to win based more on volume, activity and good defense than bone-crushing power.

Wrestling is Cormier’s wheelhouse. His approach is straightforward, with nearly impenetrable takedown defense and a lightning-fast go-behind on his opponents’ shots, but he spices up things with the occasional high-crotch lift or step-outside throw. The clinch might be his strongest area. He uses his squat frame to push his opponent against the fence, where he rips away with uppercuts and short hooks in combination while using head pressure, wrist control or an underhook to keep his adversary in place. On the mat, Cormier’s control is relatively loose, which allows his opponent to constantly move and wear himself out while being bombarded with a steady stream of ground strikes.

THE PICK: I am a bit surprised Cormier is the favorite here. Johnson has looked like a monster since moving up in weight, and his technical skills have finally caught up to his prodigious physical gifts. From a purely stylistic perspective, this seems like a rough matchup for the former Olympian. Johnson is the more powerful and likely the more polished striker, while his outstanding takedown defense means this will probably be contested on the feet. In that scenario, Johnson’s power and constant pressure should be the difference. Playing an in-and-out game that mixes punching combinations and takedowns against Roy Nelson or Frank Mir is one thing, but “Rumble” is an entirely different animal. If Johnson can maintain a measured pace and avoid overcommitting to his strikes, this is his to lose, and I think that he will land something big on the counter in an exchange. The pick is Johnson by knockout in the second round.