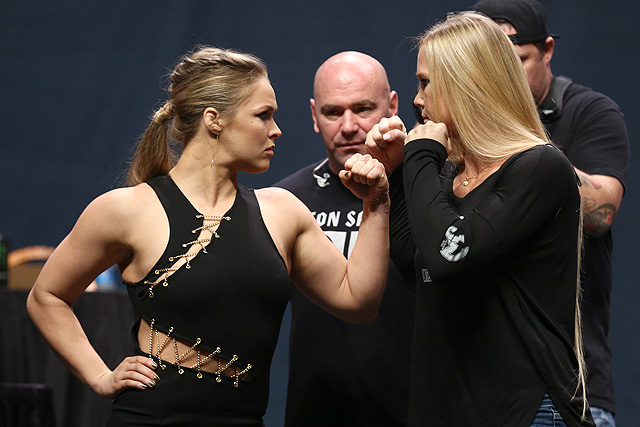 Ronda Rousey has finished all 12 of her opponents. | Photo: Dave Mandel/Sherdog.com


The Ultimate Fighting Championship on Saturday returns to Australia with a pair of women’s title fights at Etihad Stadium in Melbourne.

Let us take a closer look at each UFC 193 “Rousey vs. Holm” matchup: 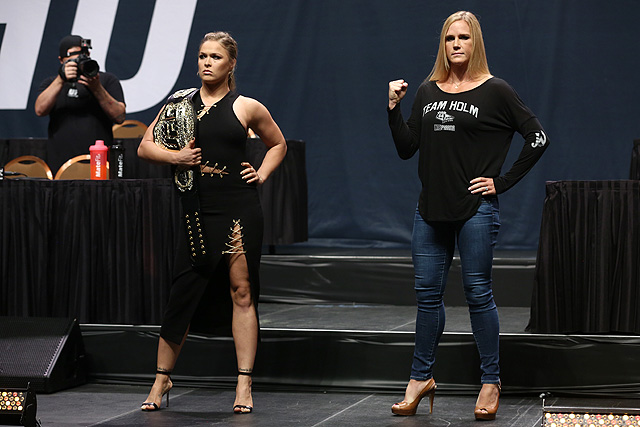 THE MATCHUP: Throughout her short MMA career, Holm has often been billed as a dangerous puncher, when in reality she has never been a knockout artist. Even as a boxer, Holm possessed a meager 24 percent knockout rate, with many of those the result of attrition against far inferior opponents. Holm’s style has always relied on movement, activity and grit.

Since coming to the UFC, Holm has fought a few variations of the same fight she has been fighting for more than 13 years. She keeps her distance, moving and feinting without really trying to sell any particular threat. Periodically she attacks, often with a lead left or a right side kick, mixing up these attacks with her left round kick, the only strike in her arsenal with consistent power. When the opponent comes forward, Holm backpedals furiously, creating as much as space as possible as quickly as possible but not doing anything to maintain that distance.

There are plenty of things that will keep Holm from beating Rousey. She telegraphs nearly every strike she throws, so even her quickest shots are unlikely to hit Rousey cleanly. Her left kick requires space to do damage, and Rousey eats up space like nobody else in the division, eager to get her hands on her next victim. Holm also does not know how to measure, preferring to stand so far away that she cannot possibly touch the opponent without first stepping in, which means that any committed attack is likely to send her careening right into Ronda’s waiting arms, ready to throw her to the canvas.

Not everything Rousey does is pretty, of course. I was impressed with the direction her boxing seemed to be taking, but it seems she has hit a roadblock, ultimately punching like a slightly more powerful, slightly more comfortable version of her former self. Rousey is hittable when she rushes blindly into the clinch, and Holm throws more than enough punches to land a few. However, Rousey also has a solid chin and a brawler’s instinct that tells her to keep attacking no matter what. On the ground, Rousey has as much of an advantage as she does over every other woman in the division.

THE PICK: These days, we do not talk about whether or not Rousey will win, choosing instead to discuss how long it will take her to do so. As she gains confidence in her striking, we also get to have fun guessing how she will win: knockout or submission? In this case, it will almost have to be a submission, and it will almost certainly take a lot longer than any of us want it to. Holm is not a very dangerous striker, but she is more than capable of circling around the Octagon for round after round to avoid Rousey’s terrifying clinch. She can rack up some points while doing so, but Rousey is the more powerful striker by far, so the more momentous strikes will probably be hers. Eventually, I see Rousey dragging Holm to the canvas and dusting off her old classic, the straight armbar. Rousey wins by submission in round four.