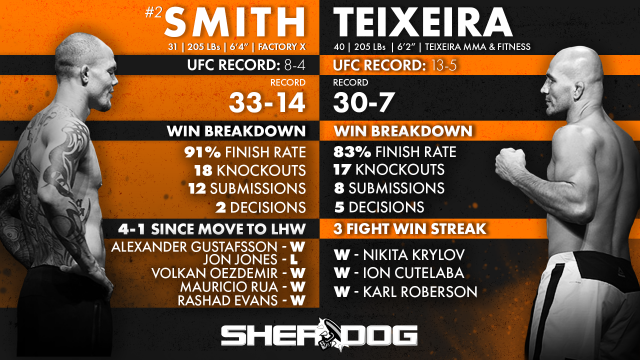 There was some hope that the Ultimate Fighting Championship’s long layoff would mean more stacked cards upon its return, but UFC Fight Night 171 on Wednesday is basically a move back to the status quo. There are still things to like, and while the Anthony Smith-Glover Teixeira headliner may not inspire excitement at first glance, it is a well-made fight with some surprising relevance.

There are some legitimately good bouts on the main card. Ricky Simon is guaranteed action; Karl Roberson-Marvin Vettori is an underrated gem; and Alexander Hernandez could have a banger against Drew Dober. There are worse ways to spend a few hours during the middle of the week, even though an essential business has put together a lineup that is certainly non-essential.

Now to the UFC Fight Night “Smith vs. Teixeira” preview:

It is still a bit jarring to see Smith as a title contender in the UFC. “Lionheart” washed out of the promotion in near-record time back in 2013, as he came over in the Strikeforce merger, lost to Antonio Braga Neto on an untelevised opener in less than two minutes and then found himself on the outside looking in. However, Smith eventually found his footing, rattled off seven straight wins and got the call back as an injury replacement two and a half years later. From there, Smith established himself as a fun if not particularly relevant middleweight, showing a penchant for late comebacks in wins against Elvis Mutapcic, Andrew Sanchez and Hector Lombard. After a loss to Thiago Santos, Smith decided to ply his trade up a weight class at 205 pounds and has enjoyed a shocking amount of success since. At first, part of that was fortuitous matchmaking, as Smith had the good fortune of getting matched against post-prime versions of Rashad Evans and Mauricio Rua, and he ran through them easily. A win over Volkan Oezdemir that followed Smith’s usual formula—survive early in order to take over late—worked wonders once again, and Smith found himself as the unlikely next contender for Jon Jones. That title fight wound up being little more than a moral victory, as Smith never really pulled the trigger and Jones coasted to a victory. Even so, the Corpus Christi, Texas, native kept himself in the championship picture with a win over Alexander Gustafsson three months later. After taking a long-deserved break, Smith was slated to headline a card in his home state of Nebraska, which would have been a nice highlight in a career that has been a monument to persistence. Unfortunately, the coronavirus scuttled those plans, and while Smith still faces Teixeira, that fight takes place in Florida a few weeks later than planned.

Teixeira’s path up the light heavyweight ladder was much more straightforward than his opponent’s. Visa issues delayed his signing for a few years, but once the Brazilian hit the Octagon in 2012, he strung together five wins and fought Jones for the title within two years. Like everyone before and after him, Teixeira could not unseat the light heavyweight kingpin, but he has done an impressive job of staying relevant in the ensuing six years. A loss to Corey Anderson in 2018—coincidentally on the same card where Smith dispatched of Rua—was concerning, as Teixeira was slow to react to his opponent’s takedowns and striking in a way that he was not in previous outings. He spent all of 2019 showing that he was not done yet. Younger and more athletic prospects in Karl Roberson, Ion Cutelaba and Nikita Krylov all managed to damage him, but Teixeira survived and came away with a victory each time out. Amazingly, even at 40 years old, a win here might put Teixeira back in the title picture after getting written off for the umpteenth time.

This might feel like a step back from Smith’s last few fights, but it is a surprisingly difficult matchup to call. Smith has done an impressive job of weaponizing the mental issues that have plagued a lot of his career; where he would once fold under pressure, he has now learned to steel himself, survive and fight back. Jones aside, he has also gotten opponents at light heavyweight where that was destined to work, Beyond Evans and Rua, Oezdemir has struggled with gas tank issues and late-career Gustafsson has not inspired much confidence. Where does Teixeira fall at this stage of his career? Has he slowed down to where he falls into the same category as Evans and Rua, in which case he seems likely to get steamrolled, or is he a born survivor who can withstand danger on his way to victory? Adding to the intrigue: Parts of this style matchup certainly favor Teixeira. Smith’s defensive wrestling has improved, but it remains a liability, and while the Factory X rep has managed to survive on the ground, Teixeira is a much more adept finisher than those recent opponents. In the end, youth and speed are too much to bet against, and while Teixeira has survived early trouble in each of his 2019 wins, Smith tends to finish what he starts once he actually commits himself to doing so. The pick is Smith via stoppage in the late first round.