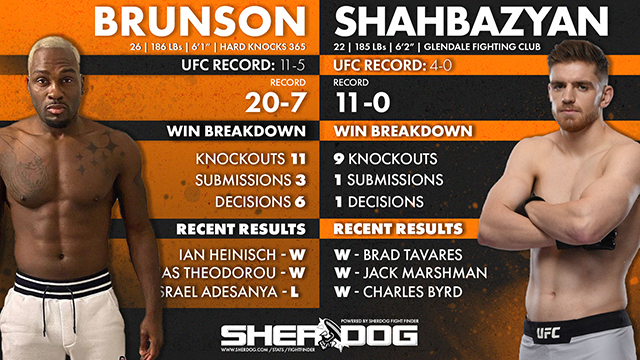 The Ultimate Fighting Championship on Saturday brings the Octagon back to Las Vegas with UFC Fight Night 173, and much like its offerings in June, this one feels a bit thrown together. With that said, this is a relatively strong main card buoyed by the top three fights. Losing the original Holly Holm-Irene Aldana headliner certainly ups the entertainment value, as the night will now end with Edmen Shahbazyan looking to prove he is on a prodigy track towards middleweight gold. Joanne Calderwood stepping in on late notice adds some real stakes to her co-main event against Jennifer Maia, and the Vicente Luque-Randy Brown pairing will either end with a huge breakout win for Brown or Luque implementing his usual level of entertaining violence. Add in two bouts put together purely for excitement, and as long as the pacing remains brisk, this should be a fun night of fights.

Shahbazyan had all the markings of someone who would fail at the UFC level. He was completely untested as a can crusher prior to his win on over Antonio Jones on Dana White’s Contender Series. Add in that he is managed by Ronda Rousey, and the whole thing essentially reeked of someone who got signed more for his connections outside of the cage than any sort of accomplishments inside of it. No matter how he got the opportunity, Shabazyan made good on it in spades, as he had a breakout 2019 campaign that established him as one of the UFC’s most interesting prospects. His UFC debut against Darren Stewart was not a particularly high-level affair, but it was impressive in its own way. Faced with someone who did not immediately go away, Shahbazyan embraced the grind for an ugly decision win, which at least showed a willingness and ability to adjust that prospects often do not possess. From there, Shahbazyan has gone back to his quick-finishing ways. Charles Byrd went for a takedown and immediately ate some elbows; Jack Marshman got taken down and tapped out; and Shahbazyan ran through Brad Tavares in impressive fashion, staying patient until he stunned the Hawaiian and blitzed him for the finish. There figures to be a ceiling on exactly how long Shahbazyan can keep quickly knocking out opponents, but he has already gotten himself to the fringes of the title picture. With a win here against Brunson, Shahbazyan could find himself in a championship fight long before anyone would have expected.

Brunson’s certainly had a strange evolution over the years. Coming up through Strikeforce and during his early days in the UFC, Brunson was primarily a blanketing wrestler with some submission skills who was building out a patient and well-rounded game. However, with his 2015 knockout of Ed Herman, that all went out the window, as Brunson spent the next two years racking up a string of first-round finishes as he succeeded in running over his opponents. That all backfired wildly in his 2016 headliner against Robert Whittaker; Brunson repeatedly charged wildly at the future middleweight champ, and Whittaker consistently stopped Brunson’s assault with some solid punches to the face until one eventually stunned the North Carolina native enough to lead to the finish. Since then, Brunson has been somewhat of a headcase. His next bout against Anderson Silva saw him get intimidated into enough inactivity that “The Spider” got the nod, and from there, Brunson went on a streak of either winning immediately or flying completely off the rails. Both of Brunson’s 2019 fights went 15 minutes, which was a nice change of pace. He and Elias Theodorou combined for a bout weird enough that it should not count going forward, but his win over Ian Heinisch saw him immediately get blasted and actually right the ship with a measured performance. While a lot of the narrative rightfully revolves around this being a huge opportunity for Shahbazyan to prove himself, it is just as crucial for Brunson to show he can be the best version of himself this late into his career.

Again, a lot of the talk here revolves around Shahbazyan’s opportunity to suddenly become a contender, but as far as who wins this, this may all come down to Brunson. Shahbazyan still has a lot of questions to answer about how he hangs in deep waters, but thus far, he has shown a knack for both waiting for the right opportunities to be aggressive and taking full advantage when those opportunities present themselves. Shahbazyan will probably find an opportunity to turn up the pressure here sooner rather than later, so from there, it is all a question of how Brunson reacts. If Brunson does not freak out, he would be well-served by taking a similar approach to the Heinisch fight once he finds himself in trouble: Take things to the clinch, slow down the fight and regroup from there. Even coming off his strongest overall performance in years, Brunson has enough of a track record that the default expectation is that he will go careening wildly off the tracks as soon as Shahbazyan starts hunting for the finish. The pick is Shahbazyan by yet another first-round knockout.