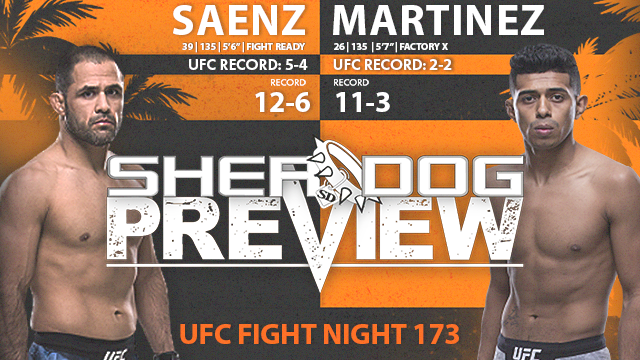 The Ultimate Fighting Championship returns to Las Vegas with UFC Fight Night 173 this Saturday and will do so with a fun slate of prelims. In terms of immediate relevance, there is not much here, but there is some interesting stuff that could pay off down the line. Jonathan Martinez and Chris Gutierrez are under-the-radar bantamweights looking to build off strong performances, and Ray Borg gets a chance to prove that he belongs at 135 pounds. Timur Valiev is an obvious prospect—if he can even be called that—worth watching down the line, and, of course, Ed Herman’s bout against Gerald Meerschaert figures to bring some type of entertainment value. There is no one huge reason to tune in, but those who do not may be disappointed.

Now to the preview for the UFC Fight Night “Brunson vs. Shahbazyan” prelims:

This should be an enjoyable scrap that should also help illuminate where each of these fighters are at the moment. Saenz has had an underrated run in the UFC thus far; he did not get into the UFC until he was 34 years old, but he made up for lost time with three straight wins to kick off his Octagon campaign, including a victory over Iuri Alcantara that still counts among the biggest upsets ever, per betting lines. Saenz gave those gains back by losing three straight, but he rebounded nicely with wins over Merab Dvalishvili and Enrique Briones. A quick loss to Marlon Vera in 2019 raised some concerns, but unless age has finally caught up with Saenz, he should be a tough out every time he enters the cage. He will face Martinez, who has quietly putting together an interesting tenure. Martinez did not show much in his UFC debut against Andre Soukhamthath, but he put together a strong 2019 effort: A win over Wuliji Buren proved he belonged in the promotion, and a come-from-behind knockout over Pingyuan Liu showed that the “Dragon” is at least capable of some dynamic moments. In his last fight, Martinez seemingly handled a tough style matchup in Andre Ewell. However, Ewell shockingly got the nod on the scorecards, so Martinez looks to rebound here. Saenz should be able to dictate the terms of this fight; he is at his best when he can get his wrestling game going, and takedown defense has been a clear weakness for Martinez during his UFC campaign. The concern involves Saenz wading through danger to get there. Martinez may be a patient striker, but the Liu fight showed that he can score a knockout when it is available, and Saenz is both aggressive and a defensive void. Saenz’s loss to Vera raises some worry that he may go down on the first hard shot of the fight, but the pick is still for the Fight Ready rep to rely on his pace and wrestling to earn a tough decision victory.