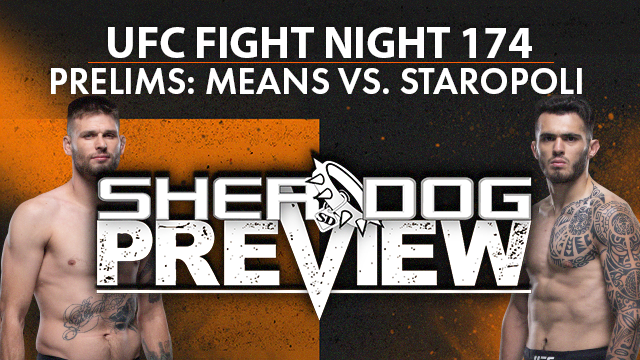 Ultimate Fighting Championship events at the UFC Apex in Las Vegas have consistently had a thrown-together feel, but UFC Fight Night 174 on Saturday offers a better undercard than most. Tim Means and Laureano Staropoli combine for an intriguing featured prelim in terms of action and importance, and Nasrat Haqparast looks to reignite his ascent as one of the sport’s top prospects. There are also some interesting featherweight fights—Gavin Tucker-Justin Jaynes should tell us a lot about both men—and we get a delayed appearance from Kevin Holland.

Now to the preview for the UFC Fight Night “Lewis vs. Oleynik” prelims:

This featured prelim should be a fun time and an interesting benchmark to see where each of these welterweights are at in their respective careers. It is difficult to know what to make of Means’ last few performances, as he has alternated impressive victories with losses that suggest the end may be near for “The Dirty Bird.” Means has been a reliable bringer of violence for years, but losses to Belal Muhammad and Sergio Moraes raised the first red flags; they were close decision losses that easily could have gone Means’ way, but he looked a bit slower and less willing to pull the trigger than usual. A quick and brutal win over Ricky Rainey seemed to assuage those concerns, only for a loss to Niko Price to raise some new ones. Means was fully back to his violent ways, but Price managed to come back and obliterate him for the first clean knockout loss of his long career. That cycle quickly repeated itself in the last nine months. Means righted the ship with another quick win, this time over Thiago Alves, only to shockingly get finished by Daniel Rodriguez in February. Now the question involves whether or not Means can even rely on his usual hard-charging style, and Staropoli should be able to provide an answer. Nothing suggested that Staropoli would be able to hang at the UFC level. The UFC ran a card in his native Argentina back in 2018, and Staropoli’s signing looked to be based more on the need for local flavor than any sort of merit. However, he has proven to be surprisingly solid, with wins over Alves and Hector Aldana. The Alves win basically reflects Staropoli’s approach, as he managed to take advantage of the Brazilian veteran’s inability to keep up at his later age. “Pepi” is not a particularly accurate fighter, but he is willing to keep throwing volume and set a quick pace to overwhelm his opponent, even if he does not always connect. There is a chance that Means simply takes over this fight and makes it a short night, but Staropoli has proven to be tough so far; and if the Argentinian is willing to keep pressing his offense for three rounds, there is more and more concern over whether or not Means can survive a 15-minute war. The pick is Staropoli via third-round stoppage.