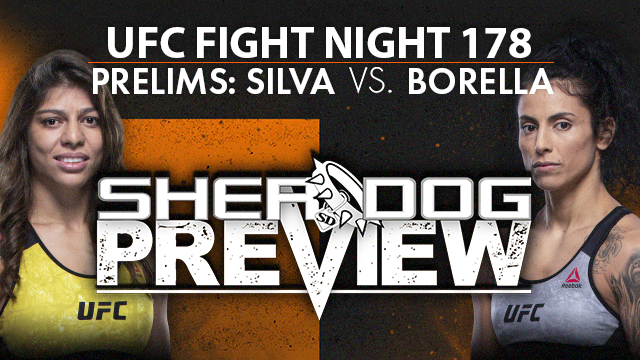 While it does not live up to the excellent main card, the slate of prelims at UFC Fight Night 178 on Saturday in Las Vegas still should offer a good time. Nobody on the undercard weighs more than 145 pounds, and that basically guarantees action from top to bottom, whether it comes from trusty veterans like Tyson Nam or debuting talents like T.J. Laramie and Jerome Rivera. In terms of immediate stakes, there is not much here, but this should still be a solid appetizer for things to come.

Now to the preview for the UFC Fight Night “Covington vs. Woodley” prelims:

The Brazilian iteration of Dana White’s Contender Series unearthed some solid additions for the UFC roster, with Silva being among them. “Sheetara” was not particularly proven heading into the UFC, but she showed some well-rounded skills and solid aggression on both the Contender Series and in her UFC debut—a first-round submission win over Gillian Robertson. However, Silva has mostly been a forgotten woman since then. She tore up her knee in the Robertson fight, and it was be 18 months before she entered the Octagon again, right before the pandemic forced the UFC to go on hiatus. Her return fight also raised some issues about the true effectiveness of her pressure game. Maryna Moroz mostly forced Silva to chase her for 15 minutes and made the Brazilian look plodding in the process. On the plus side, none of that should be a factor against Italy’s Borella, whose game has slowly fallen apart since an impressive UFC debut in 2017. Borella is physically powerful, but she has put that to less and less use. She was an effective neutralizer against Taila Santos, but a knockout loss to Lauren Murphy in 2019 seems to have broken her, leaving her with a conservative style that also does not seem all that defensive. Even if Borella looks to stall this out, Silva looks to be a strong athlete in her own right and much more willing to hunt for a finish. The pick is Silva via second-round submission.