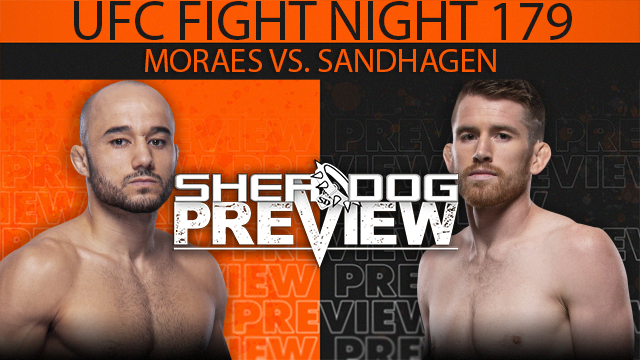 UFC Fight Night 179 on Saturday in Abu Dhabi, United Arab Emirates, may not set the proverbial box office on fire, but the Ultimate Fighting Championship managed to piece together an intriguing six-bout lineup for the main card. The bantamweight headliner between Marlon Moraes and Cory Sandhagen leads the way as the lone fight that provides high stakes and guaranteed action. However, the Edson Barboza-Makwan Amirkhani co-headliner should entertain, and there are a number of high-potential prospects further down the card: Tom Aspinall, Youssef Zalal and Ilia Topuria.

Now to the preview for the UFC Fight Night 179 “Moraes vs. Sandhagen” main card:

It has been an odd year-plus for Moraes, who suddenly found himself going from next man up to forgotten man in the bantamweight title picture. After running through his opposition for years as World Series of Fighting’s 135-pound boogeyman, Moraes was expected to make an immediate impact upon signing with the UFC in 2017. The UFC matched him up with Raphael Assuncao in his debut in a pairing the promotion likely hoped would kill two birds with one stone, allowing Moraes to make a splashy entrance while also keeping his bland counterpart out of the title picture. Instead, Assuncao had one more performance as spoiler left in him, as he dragged Moraes into a slow-paced kickboxing match that saw him get the split decision. To his credit, Moraes quickly managed to rebound. After a narrow decision win over John Dodson, he quickly finished Aljamain Sterling and Jimmie Rivera, then blew away Assuncao in a rematch to establish himself as a top contender. T.J. Dillashaw’s failing a drug test and getting stripped of his belt set up Moraes for a title fight with then-flyweight champion Henry Cejudo. Moraes was the favorite to take home the strap, but what ensued was a reminder that sometimes technique is no match for brute force in this sport. “Magic Marlon” handily won the first round by picking apart Cejudo, but the 2008 Olympic gold medalist eventually decided to tank damage and charge through Moraes’ offense, eventually earning a third-round finish. Moraes theoretically rebounded in December with a win over Jose Aldo, but he instead wound up being the victim of the most successful moral victory of all-time. It looked like a cut-and-dry Moraes win: Aldo had some success with a bullying style but got picked apart in the process. However, between the lowered expectations for Aldo’s debut at 135 pounds, the narrative that he was the more aggressive fighter and the fact that the UFC had to sell tickets in Sao Paulo, Brazil, prior to the pandemic, it was the Nova Uniao standout who was suddenly in line for a title shot that should have belonged to Moraes. There has been a ton of movement in the bantamweight division since the UFC fired up its post-pandemic engines, but there has not been much sign of Moraes, who has remained out of action until this main event assignment. In a title picture now more competitive than ever, he will need a strong performance against Sandhagen to hold serve.

While there were years of anticipation leading up to Moraes’ UFC debut, Sandhagen essentially popped up out of nowhere as a bantamweight contender. His promotional debut was a complete afterthought, as he stepped in on less than a week’s notice for a thrown-together bout against Austin Arnett in early 2018. Sandhagen has much the same schooling as Dillashaw, and it shows. While Sandhagen may not have the power or craft of the former bantamweight champion, he makes up for it with his massive size for the division and a willingness to set a relentless pace. In his first few bouts inside the Octagon, Sandhagen was a promising and entertaining fighter, but he did not appear to be ready to shoot up the ladder in the manner in which he did. His aggressive style seemed to have him walking a razor’s edge, particularly in a confrontation with Iuri Alcantara that nearly saw him get tapped. However, 2019 turned out to be Sandhagen’s breakout year, as he frustrated Assuncao and John Lineker, playing with distance to win exchanges, stay out of trouble and essentially leave his opponents wondering what would come next. Sandhagen finally hit his ceiling in June, as least for the time being, as Sterling shockingly finished him in just 88 seconds. Faced with someone who could match his reach and his grappling, Sandhagen was not able to do much when Sterling decided to immediately take things to the mat and work for a submission. While it did provide a clear blueprint for how Sandhagen can be beaten, there are not a lot of fighters—even in a deep bantamweight division—who can match Sterling’s particular set of physical advantages and skills. This fight against Moraes represents a huge chance for Sandhagen to prove that styles make fights and get back on track against another normal-sized striker.

Moraes is the much more proven fighter, but if he cannot finish this early, he could be in some trouble. Sandhagen is not quite the brute that Cejudo can be, but he presents a similar problem for Moraes in that he is willing to keep moving forward while setting a high pace that should wear out Moraes out; and unlike Cejudo, Sandhagen should use that approach from the outset. If Moraes cannot dissuade or destroy Sandhagen with one of his signature violent bursts of offense—entirely possible, since Sandhagen is a large target and not particularly defense-minded—Sandhagen should eventually drown Moraes with volume, particularly in a five-round fight. There are some unknowns and some risks that could work in Moraes’ favor, however. Sandhagen does tend to fall into the clinch or into grappling exchanges as he pressures forward, and his last fight showed that approach can be a liability against a certain level of wrestler. Moraes does have strong grappling credentials that he has rarely been forced to use, but there is a chance that he can simply catch Sandhagen in a scramble and end this early. While Sandhagen has proven to be durable, that may not be enough to survive a fight against Moraes. Cejudo was more of the exception than the rule in terms of handling Moraes’ offense, as Sterling and Rivera were also reliably durable fighters that lasted a combined 100 seconds against Moraes. Either Moraes wins this early or Sandhagen takes this late, and despite the fact that he remains relatively unproven, many factors in this fight seem to favor the Colorado native. Expect Sandhagen to survive some trouble on his way to a decision victory.